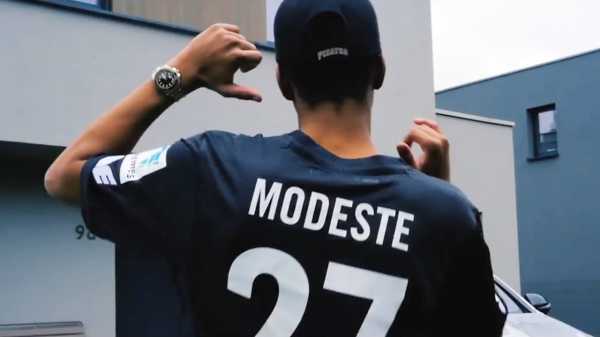 Last December, the Manchester United attacker Jesse Lingard scored a nifty goal against the team’s longtime rivals, Arsenal. To celebrate, he ran to the corner flag and began milly rocking—a dance which was born in New York and raised on the Internet. Over the past two seasons, Lingard has worked his way up the ranks at Manchester United, the club he joined at the age of eight, establishing himself as a rare homegrown star and trusted member of the England national squad. It’s part of his underdog charm that he’s had a lot of fun while doing it, punctuating his goals with GIF-ready dance celebrations. That he was milly rocking at the Emirates, Arsenal’s stadium, only enhanced his legend.

Sadly for Lingard, there was no milly rocking on Wednesday, when England lost to Croatia in the World Cup semifinals. But that sparkling moment against Arsenal lives on in song. A few weeks after that goal, the London rapper Twissman released “Jesse.” “Who’s Messi? / I’m ballin’ like Jesse,” he boasts over some slow-creeping pianos, trying his hardest to sound both smooth and gruff. He, too, milly rocks anywhere he pleases, for he is “Jesse Lingard with the shot.” The following month, the rappers Malachi Amour and Manzo, also from London, recorded “Lingard,” a lilting, spaced-out tribute to the against-all-odds star: “I be feelin’ like I’m Jesse Lingard / You’re fuckin’ with us now, but we been hard / Got me feelin’ underrated like I’m Lingard.” There was something beguiling about these songs’ mixture of reverence and of-the-moment gimmickry. The rappers were trying to capture the excitement of a transcendent flash of skill, not the long arc of a great career.

I’m often looking for ways to inject some randomness into online music searches. (I’m also in constant search for new forms of procrastination.) A few days after hearing “Jesse” and “Lingard,” I began scouring YouTube for rap tributes to soccer players (and occasionally managers), the more random the better. I ended up with a by-no-means-comprehensive playlist of nearly a hundred songs, and also a survey of the gritty, often thrilling turns that hip-hop is taking around the globe.

“She wasn’t with me for the whole come-up / Now I’m scorin’ like Mo Salah,” the London rapper Big Jest warbles, hoping to prove doubters wrong, just like the once-overlooked but now beloved Egyptian attacker. The names of soccer stars lend themselves to the repetitive, mantra-like hooks that dominate contemporary hip-hop. As La Fouine, a booming French rapper with Moroccan roots, repeats “Salah Salah Salah / Mohamed Salah Salah Salah,” the name begins to accumulate an aura, as though saying the name over and over will reflect some shine back on him. Other times, the names just make for obvious narcotics puns: “Dele Alli I supply Kane / Dele Alli I supply Kane,” the London rapper Omz brags, referring to the Tottenham Hotspur midfielder and his teammate, Harry.

Perhaps the reigning football-obsessed rapper is London’s AJ Tracey, who’s released songs named after the Brazilian defender “Thiago Silva” and the Argentine attacker “Kun Aguero.” But the vast majority of soccer-tribute songs on YouTube seem to be about players from the French national team. The ones about the ex-Paris Saint-Germain midfielder Blaise Matuidi alternate between being slick and composed, and, when necessary, combative, much like the player himself. Similarly, the ones about Chelsea’s dutiful, tireless midfielder N’Golo Kanté tend to be cool and composed. And the many anthems inspired by the Paris Saint-Germain attacker Kylian Mbappé are youthful and exuberant. My favorite Mbappé song is by Junior Bvndo, a teen-ager from Paris who proclaims himself the “prince of trap-funk.” He raps with a spry radiance over a jagged, festive, violent beat.

The videos often feel raw and aspirational, as if the players’ career arcs suggest the possibility of a way out. I rarely search for European rap; it often feels too beholden to the American original. But these songs felt invigorating and strange because no real American equivalents exist. Even when I could only understand bits and pieces, they communicated an irresistible sense of passion and vigor. Some tried to match the glitz and flash of attackers, like the Parisian rapper Double R’s psychedelically triumphant “James Rodriguez” or the Brixton rapper Youngs Teflon’s nimble, assured “Marcus Rashford.” Similarly, Kain’s “Vincent Kompany” is as solid and smothering as the Belgian defender, just as SME’s “Yaya Touré” feels as steady and monolithic as the legendary Ivorian midfielder. But sometimes the music doesn’t quite fit. The Swiss rapper Yahziz’s “Eden Hazard” is a spirited, menacing approximation of American trap, a strange fit for the silky Belgian attacker. The same goes for the German rapper Luciano’s “Riyad Mahrez,” a fearsome shout-along about Manchester City’s fleet-footed winger. There are a lot of songs about the stylish, powerful French midfielder Paul Pogba, but few of them capture his sense of glee.

I was drawn to the unlikely songs about lesser lights, like Lexoz’s raging tribute to the mercurial French attacker Hatem Ben Arfa, or the teen-age rapper MKN’s proud homage to his cousin-in-law, the French journeyman Anthony Modeste. They were a lot better than the tributes to all-time greats, many of which felt like attempts to foretell their own far-off impact. A few years ago, the North London rapper DAPS débuted with “Ian Wright,” beloved by fans of Arsenal: “Stayed around them Gunners,” he sing-songs, referring to Arsenal’s nickname, “I’m Ian Wright.” There are a lot of songs about moody, volatile superstars, such as Eric Cantona and Zlatan Ibrahimović. A Manchester rapper named Black Josh recorded “Paul Scholes,” as no-nonsense, technically proficient, and nineties-style as the United midfielder. Perhaps it’s not a shock that there weren’t many good songs devoted to generally uncomplicated megastars such as Lionel Messi and Cristiano Ronaldo, and that the ones about Neymar tended to be a little cheesy. (In contrast, there’s probably an entire album’s worth of songs about the maverick antihero Mario Balotelli.)

Last summer, a teen-age rapper from Harlem named Sheck Wes released the single “Mo Bamba.” Wes was saluting a friend from childhood, who was on the verge of becoming an N.B.A. star. (Bamba was drafted by the Orlando Magic last month.) “Mo Bamba” felt ominous, its energy slowly coiling around Wes’s sinister, half-rapped, half-sung verses. But its charm was its video, which featured Wes, his leg still wrapped in a brace because of a basketball injury, exploding in mirth with his friends. He eventually signed a deal with Kanye West and Travis Scott.

A lot of the soccer freestyles have more distant aspirations for breakout success, existing in comparatively smaller universes: the claustrophobia of U.K. grime and drill, the alternately tough and melodic worlds of French hip-hop, the buoyant sounds of Afro-Trap and Afrobeats. (I’ve often felt that Drake is at his most interesting when he plays the globe-trotter, trying to make songs that capture the diaspora-happy mirth of teammates coming together in a locker room dancing to Wizkid.) The videos I watched put pieces of life in the Parisian suburbs or German housing projects onscreen. These songs index how pop music can mutate as it crosses borders, influenced, inevitably, by American and Canadian predecessors. But, ultimately, these artists trace their own circuits of influence, finding cadences that suit their native language, using Auto-Tune to add a menacing gloss or to smooth out accents.

This year’s World Cup has been a reminder of our vexed relationship to nationalism, from a complex corruption scandal dulling some of the zeal around Croatia’s national team to England’s half-ironic, half-jingoistic “football’s coming home” slogan. These songs felt like a brief respite from all that. There is no doubt that many of these songs are about claiming turf. But I was drawn to the way they occasionally resisted notions of tradition or national heritage, claiming faraway underdogs. Just as art often pays little mind to discrete genres, the artists themselves seem less interested in country and city than other, more intimate forms of allegiance. It felt significant that Twissman, Manzo, and Malachi were Londoners saluting a black star from Manchester. Last month, the Belgian striker Romelu Lukaku wrote a piece for The Players’ Tribune about his complex relationship to being Belgian—at least in the eyes of others. “When things were going well, I was reading newspapers articles and they were calling me Romelu Lukaku, the Belgian striker. When things weren’t going well, they were calling me Romelu Lukaku, the Belgian striker of Congolese descent.”

Many of these songs channel a similar sense of estrangement. One of the songs about Lukaku is by Skyy Boii, a Scottish rapper originally from Nigeria. “Lukaku,” released in 2016, begins with a stern, cavernous beat. But Skyy Boii sounds breezy and carefree, drawing strength from the Belgian striker’s roots, rapping about being a “true African,” too, and laughing through the video alongside his friends. “It’s the year of the fuckin’ underdog,” he raps, and it’s unclear whether he’s talking about himself or about Lukaku, whose career was then at a crossroads. These aren’t songs about the might of nations or cities, the traditional sites of sports provincialism. Instead, they’re about journeys across oceans and continents, or maybe from the other side of the tracks. You carve a modest piece out of a vast, new land, and then you see someone on a TV screen whose arc feels proximate to yours. He pulls off a move that feels bold and majestic, the masses roar, and, in that moment, a world of possibilities opens up.

The Trump administration is ramping up its investigation into Clinton emails

Michaela Walsh through to Euro final on mixed morning for Irish...

“Where Love Is Illegal”: The Photographer Who Collects Stories of L.G.B.T.I....