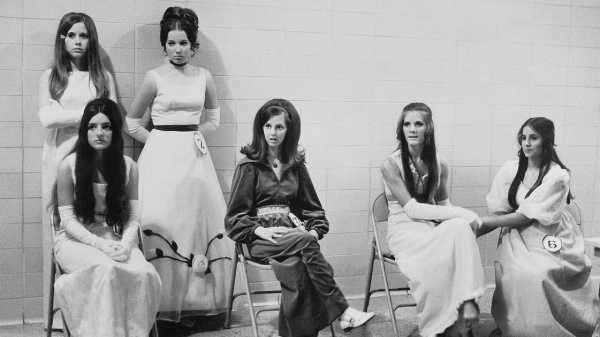 In a two-page spread featured early on in “Growing up Female,” a photography book by Abigail Heyman, from 1974, two black-and-white pictures are laid out side by side. The left-hand photo shows a reflection of a little girl, from the shoulders up, gazing at herself in a bathroom mirror. The child, who is perhaps four or five, with dark, wide-set eyes and a pixie haircut, is separated from her likeness by a counter, whose white-tiled expanse is littered with a variety of beauty products: perfume bottles, creams, and soaps. These quotidian markers of feminine routine are accompanied by an element of fantasy; gazing at herself, the little girl stretches a slinky into a makeshift tiara atop her head. Seemingly mesmerized by her own image, she is captured at the innocent early stages of preoccupation with womanly self-presentation and self-making. On the spread’s right-hand side, meanwhile, is a self-portrait of Heyman in a mirror, though it is cut off not at the shoulders but at the neck—a composition more evocative of a decapitated head than of a classical bust. In the photo, Heyman is in her early thirties, and her face, under a halo of messy hair, wears a worried expression. Like her young counterpart, she is separated from her image by beauty products, but, here, they read less as tools of pleasurable transformation and more as objects that split a woman from her self, a divide echoed by an ugly crack that runs the length of the wall on which the mirror hangs. There is no sense of wonder here, only a drab reality, thick with dread. On the page, above the picture of the little girl, there is a handwritten quote: “My aunt used to say, ‘You’re a pretty girl. You’ll do well.’ ” Set next to Heyman’s bleak self-portrait, this sentence seems less like a reassuring truism and more like a witch’s curse. 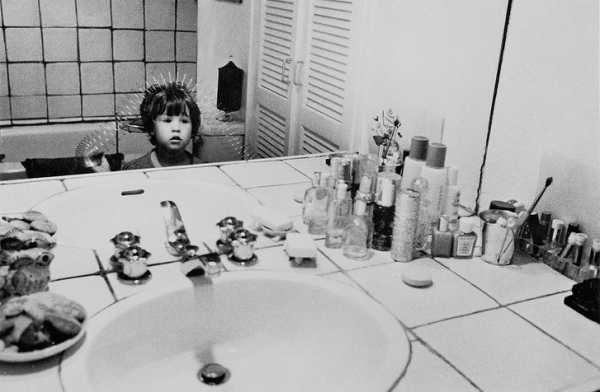 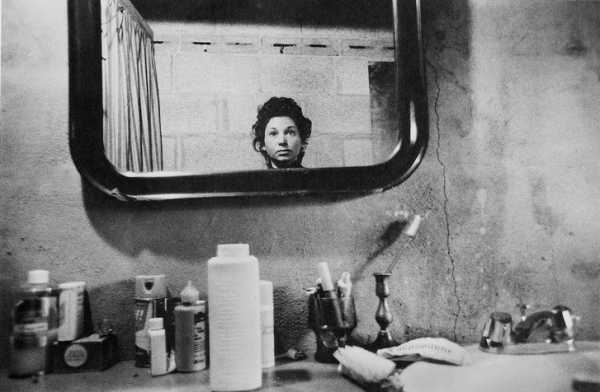 Fantasy and reality, joy and oppression, hope and difficulty: the two images present contrasting but complementary angles from which to look at the everyday business of being a woman, which Heyman sought to document in all its complexity. “Growing up Female” was a hit when it was published, selling more than thirty-five thousand copies and serving as a de-facto companion piece to one of the bibles of American second-wave feminism, “Our Bodies, Ourselves,” from 1970, an instructional guide whose direct, unembarrassed approach to women’s health and sexuality—and women’s right to make decisions regarding their bodies—was positively revolutionary. Although Heyman’s book was a collection of fine-art photographs, it, too, aimed to provide women with a rousing reaffirmation of their own corporeal and emotional experiences, many of which had historically been hidden or diminished. “Heyman’s work is the perfect illustration of ‘the personal is political,’ ” the Paris-based photo historian and curator Clara Bouveresse told me, when I spoke to her recently on the phone. “It’s like reading a private and intimate diary, but its feminist issues have a collective dimension.” 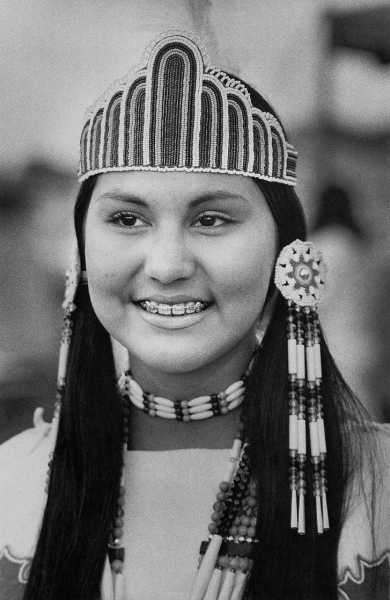 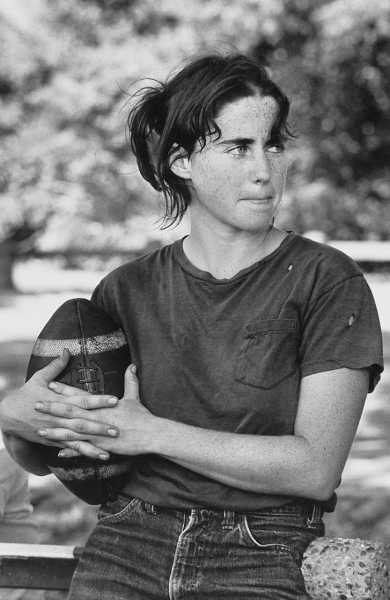 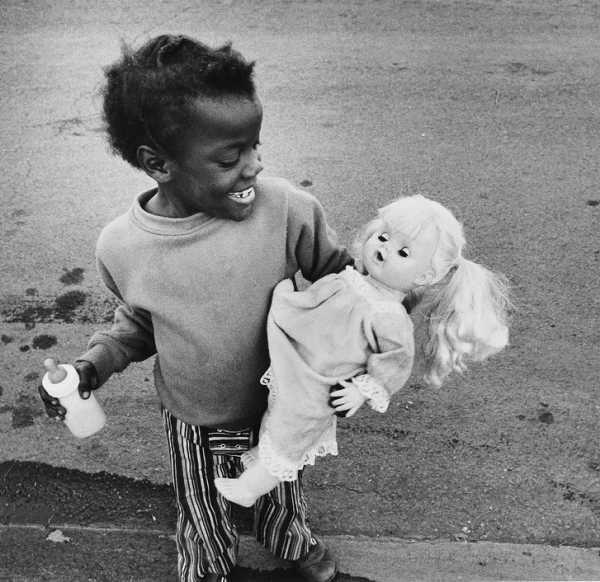 Bouveresse, who, earlier this year, curated a historical show of women in the seventies who photographed other women for the Arles photo festival, in which Heyman’s work was included, encountered “Growing up Female” by chance. She was doing research at the Mana Contemporary art center in New Jersey, which houses many photographic archives, when she came upon a box that contained Heyman’s work. The photographer, who died in 2013, at the age of seventy, never replicated the initial success of “Growing up Female.” Between 1974 and 1981, she was part of the prestigious photographers’ co-operative Magnum, but after she left it, and with feminist photography losing its cultural urgency as the eighties drew to an end, her work gradually sank into obscurity. Bouveresse, however, was struck by the force of the pictures she encountered, and by their still-fresh depiction of women’s lives, caught between self-expression and the circumscribed, structurally determined roles they are often, even today, relegated to. She was also impressed by the arresting combination of written text and images that make up the book. Some of the included utterances were the photographer’s own, and some were solicited from her friends and acquaintances. According to Bouveresse, this blurriness of authorship was intentional—making a particular personal experience into one that many women could identify with and claim, to greater collective impact. A spread from “Growing Up Female.” 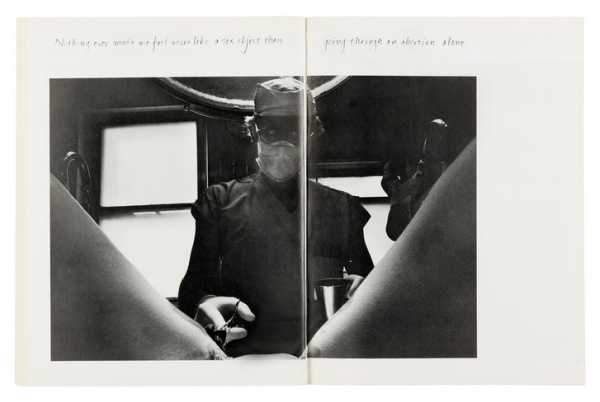 Heyman’s images are specific to a distinct place and time—the America of the late sixties and early seventies, roiled by the feminist revolution and other protest movements, yet caught in the grip of earlier, more conservative ideologies. In other ways, however, these humanistic photos still feel relevant to our time. In several images, each taken in a different location and context, a woman is seen with her legs spread open. A stripper, her head and face obscured and her genitalia agape, performs a dance for a row of silent, gazing men; a new mother, her legs tented wide under surgical fabric, gives birth. (“At first I didn’t want my husband in the delivery room because I didn’t want him to see me that exposed. And I was afraid he would never want to make love with me again,” the accompanying text says.) Heyman herself is represented, too: “Nothing ever made me feel more like a sex object than going through an abortion alone,” she writes, the text hovering above an image of the dark triangle of her own legs, between which a doctor stands, performing the newly legal procedure. 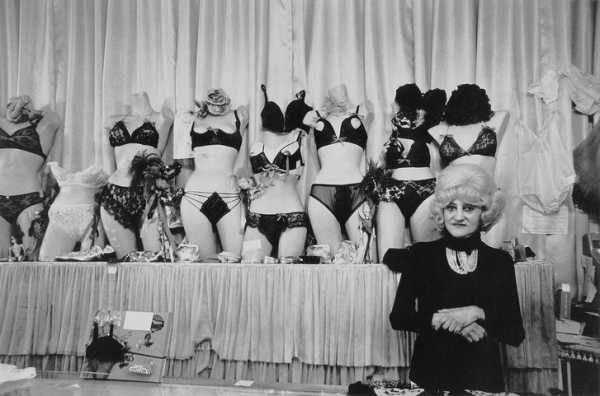 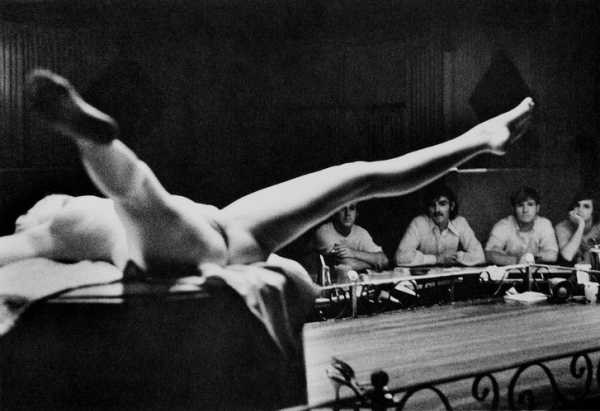 Women, Heyman showed, are always at risk of being seen as an abstraction—something less than fully human. In such a context, photography itself becomes a feminist act. In the act of composing these images, some of which dealt with private, taboo moments that had rarely, if ever, figured in the world of fine photography, Heyman reclaimed not just her own humanity but that of her subjects’ as well. In one image, a woman lies on her back, naked from the waist down, save for her socks, interacting genially with a group of fellow-women, who crowd encouragingly around her. “In a woman’s gynecological self-help group I got to know my body—and myself—better,” the text on the page opposite the photo reads. “Have you ever looked at your own cervix?” If a woman is exposed here, it is peaceably, unashamedly, painlessly, for her own education and that of other women. Looking at this image, it occurred to me that the book’s title might have meaning beyond the merely biological. To grow up female is not just to develop in a woman’s body over time but also to emerge into a greater, less embarrassed, less hidden, and more present understanding of what being a woman means, as complicated and contradictory as that meaning might be. 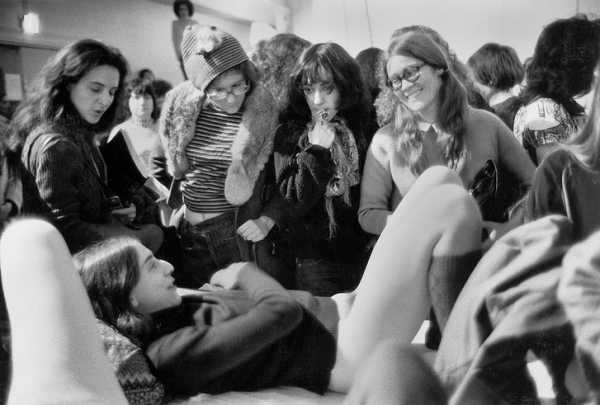 ‘Take Him Down on the Economy, Stupid’: Democrats Hold First Post-Iowa...

At Least 2 Reportedly Killed in Church Shooting in Texas

Netanyahu Issues Threat to Those Behind Gaza Rocket Fire that Forced...