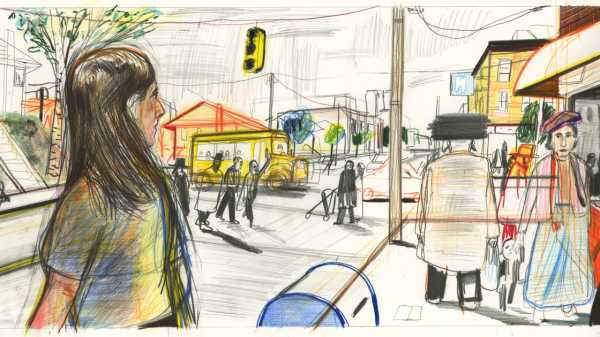 We arrived in the night. Or maybe it wasn’t night yet, just late and dark. It had been similarly dark when we left our Moscow home that morning, and the hours spent in flight and in the airless enclosures of the airports and customs seemed to have stripped me of any sense of time. Our relatives met us at the airport and drove us to our new home. My first glimpse of Pittsburgh was shiny wet sidewalks and shimmery streetlights, and the Cathedral of Learning—the University of Pittsburgh’s famous landmark—majestic, starkly Gothic, and bathed in an orange glow. I looked at it with longing. In Moscow, I would have been a college junior.

Our relatives had found us an apartment on the ground floor of a three-story town house, in a neighborhood called, whimsically, Squirrel Hill. I had assumed we’d be staying with them for a while, but they explained that Squirrel Hill was where all Russian Jews started out. We wouldn’t need a car, because Squirrel Hill had everything.

Inside the apartment were three empty rooms, with two bricked-off fireplaces and brown wall-to-wall carpeting. There was supposed to be furniture, too—provided, I think, through the Jewish Federation—but it hadn’t yet come in. We slept on rented folding beds that night. My elderly grandmother took the smaller bedroom in the back; my parents settled for the walk-through living room; and my sister and I got the larger bedroom, with a huge, glaring window facing the street.

When people ask what I remember best about those early days, I tell them how unsafe I felt in that apartment—so low to the ground and easy to breach—with its glass-panelled entrance, flimsy locks, and especially that gaping bedroom window that seemed to advertise our vulnerable status, practically begging someone to break in. I was nineteen that autumn, my sister twelve. It would be years before I could look to her for comfort.

Back then, I still equated anonymity with safety. In Russia, patriots and neo-Nazis had rallied in Red Square and called for Jewish pogroms on TV, and still I’d think, But how would they know where to look for us? In our Moscow apartment, we were a speck amidst high-rise apartment blocks.

In daylight, we explored our new street in Squirrel Hill, leafy, serene, and full of expensive one-family houses. Storybook Tudors, modern split-levels, stately Colonials with circular driveways. They were beautiful houses, yes, but so visible, so unprotected, with the names on their mailboxes and house numbers clearly displayed.

Yet no one else seemed concerned. People dropped their kids off at school, drove to and from work, parked their cars in their driveways, walked their dogs, went in and out of shops and restaurants. They had their routines and soon we developed our own. There were forms to complete, phone calls to make, books to check out at the Carnegie Library, medical appointments and visits to the dentist, journeys to the local supermarket, called Giant Eagle. Daily E.S.L. classes at Anathan House. My sister went into sixth grade. My father studied for his driver’s license. I barely noticed when my fears subsided, then disappeared altogether along with the lingering jet lag.

Here’s what surprised me most: Squirrel Hill was openly, unapologetically Jewish. It had synagogues and Jewish schools. From my bedroom window, I could see the orange turret of the Jewish Community Center, where we had a free membership that year; and where I sometimes went swimming and my sister played Ping-Pong after school. Jewish Family and Children’s Services occupied a building nearby. Less than a block east, on buzzing Murray Avenue, kosher groceries and restaurants rubbed shoulders with Rite Aid and Eat’n Park. There was Rosenbloom’s Bakery, which hired Russian immigrants, and Yaakov’s, which made kosher pizza that was also vegetarian. Supermarkets carried gefilte fish in jars and a stunning selection of matzo. In Moscow we’d had to make gefilte fish from scratch and get a year’s worth of matzo at the Moscow Choral Synagogue.

In Russia, the very word “Jew” was embarrassing, unseemly. You didn’t say it in polite company. Didn’t say it at all if you could help it. If you were a Jew in Russia you tried to conceal it. If, say, your mother was ethnically Russian, you’d have her last name and ethnicity recorded in your birth certificate and passport. Not to say that this subterfuge always worked. People in Russia had an uncanny ability to deduce your ethnicity from the slightest hint of swarthiness, not to mention the shape of your nose.

In Squirrel Hill, Jews didn’t worry about being visible. They knew, of course, that anti-Semitism existed, but Orthodox women in long dresses and Orthodox men in black hats roamed its streets unafraid. The kids from the Yeshiva Schools loitered on Murray after classes. I’d look at their faces and be reminded of my own face, as if maybe we had the same ancestors, as if they were a version of myself.

Here’s a confession: I didn’t love Squirrel Hill when I lived there. In my letters to friends, I described it as provincial and small. There was a gossipy Russian community there, by turn supportive and mean-spirited, and, as for the Jewish Americans, they mostly kept their distance. They hired us to clean their houses or care for their elderly, but, even then, they seemed to view us with a sense of disappointment, as if we weren’t what they’d hoped for.

“You don’t know who you are,” the Squirrel Hill woman who hired me to look after her children said, the first one to say it but definitely not the last. She’d grown up in Squirrel Hill, knew it inside out. Her family belonged to Beth Shalom on Beacon Street. She brought her own kosher chicken to her favorite Chinese restaurant, and they made it into the dishes of her choice. General Tso’s. Moo Goo Gai Pan. “Don’t you keep kosher?” she asked me, and seemed surprised when I told her that in Moscow there had been no kosher restaurants or stores. “You don’t even know who you are, you poor thing.”

It was in Squirrel Hill, on Yom Kippur, that I first stepped inside a synagogue. Our relatives took us to the services at Beth Shalom. I was yearning for a miracle of recognition: my heart rejoicing at the sound of a prayer, as if it were encoded in my genes. But, as I sat in the upper tier of Beth Shalom, nothing felt familiar. I saw families around me, young women in slick modern dresses guiding their children to their seats, and I wanted so terribly to be like them, to have a life like theirs. And yet the gap between us seemed too great. I was a charity case in a donated dress, who spoke stilted and accented English and didn’t know a word of Hebrew. At a different synagogue—smaller, less conservative—I might have fared better. But I never returned to Beth Shalom or tried another temple. In retrospect, I didn’t give Judaism a chance.

In my twenty-six years in this country, I have become undeniably American, but my Jewish identity has remained that of a Russian Jew, an identity born in response to pervasive anti-Semitism. In Soviet times, it simmered, contained and enforced by the unwritten rules of the regime. Parents taught their children about slurs and quotas and urged them to be realistic. Don’t rock the boat or try to rise above your station. Work ten times harder than the rest of your classmates. A circumscribed life, but to us it was normal. After perestroika, anti-Semitism turned overt and virulent, with public calls for violence and threats. The government did nothing in response, and we knew that if pogroms were to happen, those in power wouldn’t intervene.

When we came to America, in the autumn of 1992, Squirrel Hill became our refuge. No more talk of pogroms, no more thoughts of being slaughtered in our beds. The Jewish community welcomed us. They were a generous community, eager to help Russian Jews, though understandably perturbed by our reluctance to follow Jewish law. They had thought they were giving us religious freedom, and here we were turning up our noses at it. Not attending services or joining congregations or even celebrating Jewish holidays. No wonder they found us wanting.

They didn’t seem to realize that they’d given us something much greater than religion. We didn’t leave our friends and homes for a chance to keep kosher or light Shabbat candles every week. We came, like so many of our predecessors, because our lives had been in danger. Not for prosperity or a better future, but to merely be, to exist.

And now it seems we have come a full circle: Squirrel Hill, the very place that had offered us safety and taught us not to be afraid, is no longer safe itself. Not after the day when eleven Jewish people were targeted and murdered at their synagogue. “It doesn’t make sense,” my sister says, and I say, “No, it doesn’t make sense.” We don’t live in Pittsburgh anymore, and neither do our parents. But it hurts anyway.

How do you grieve for a place that you can no longer call your home? For days, I read obituaries, scrolled through old photos, traced Squirrel Hill streets on a map. A meaningless task, but somehow it felt important. Online, I found a picture of the house where we rented our first apartment. It looked solid and perfectly safe. My father posted a photo of the house that he and my mother used to own—the familiar yellow siding upstairs, the quiet one-way street.

I asked if they remembered our first dentist. They said that they’d had several in Pittsburgh and asked why I suddenly cared. I told them that it didn’t matter, and, really, I don’t think it could be the same dentist. The one who died at the Tree of Life synagogue had practiced in another part of town. Richard Gottfried was his name, aged sixty-five. He treated refugees and immigrants.

Rory McIlroy ‘right there’ despite disappointing second round at Quail Hollow