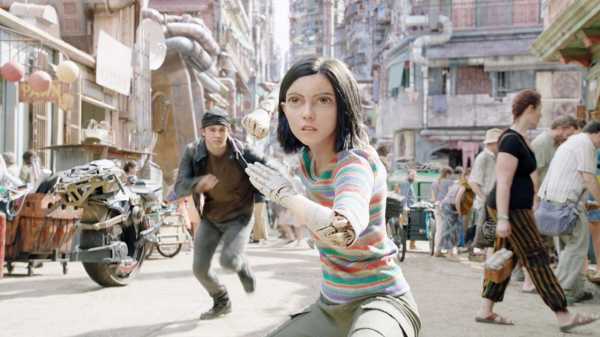 The new effects-driven science-fiction thriller “Alita: Battle Angel” stages a behind-the-scenes tussle for the ages: it is a collaboration between Robert Rodriguez, a filmmaker known for such neo-pulp action films as “From Dusk till Dawn” and “Sin City,” and James Cameron, a filmmaker whose technological sophistication is matched by a simplistic emotionalism. Here they are thrown together in a virtual video ring and try to collaborate. And, however sincere and earnest their alliance may be, the movie itself tells a different tale: Cameron’s sensibility wins, hands down. Not only does Rodriguez give up most of the fun, but Cameron also runs away with the substance. And that’s all the more unfortunate, as the two are evenly matched early on in the film and the outcome of their efforts appears, at first, promising. In an interview in the French magazine Les Inrockuptibles, Rodriguez says that he “wanted the movie to be more like a James Cameron film than a Robert Rodriguez film.” He got his wish, alas.

“Alita: Battle Angel,” directed by Rodriguez and produced by Cameron (who co-wrote the script with Laeta Kalogridis), based on a manga series by Yukito Kishiro, is a 3-D science-fiction film in which the world-building, the bane of many fantasies, is (at least at first) realized with an enticing clarity that outweighs the stepwise plot. The action is set in 2563, three hundred years after the so-called Fall, which was a literal fall: because of an attack from Mars, all of the huge space-station-like cities floating above Earth came crashing back down, except for one, Zalem, which has remained majestically afloat and apart from Earth, and which rules from above, dropping its electronic garbage down to the dumps of Iron City, a New York-like cosmopolis of shored-up ruins. In those dumps, Dyson Ido (Christoph Waltz), a doctor and a scientist, finds a still-living cyborg head while scavenging for parts, brings it back to his lab, and builds it a high-functioning robotic body.

The creature turns out to be a young girl (played by Rosa Salazar)—just how young remains, for the time being, unclear—who can’t remember anything of her identity. He names her Alita (the name of his own young daughter who was killed years earlier in an attack) and shelters, protects, essentially raises her. As Alita—alert, athletic, and impulsively combative, but completely unaware of city ways—wanders by herself and gets into comedic yet menacing predicaments, she’s pulled out of harm’s way by an all-human teen-ager named Hugo (Keean Johnson), an orphaned charmer with big dreams of making his way up to the shining city of Zalem. They become friends; Hugo introduces her to his crowd, and teaches her to join in with them in the city’s sport, Motorball (shades of “Rollerball”), a competition on skates that involves the passing and grabbing of a metal ball and a great deal of roller-derby violence in competing to possess it.

Gradually, the planned anarchy of Iron City emerges: there’s no police, and certain residents—mostly cyborgs—volunteer to serve as Hunter-Warriors, i.e., bounty hunters who compete with each other to catch suspects whose faces are broadcast on video screens throughout the city, and whose capture is confirmed by hulking and street-shaking robots that enforce the reign of Zalem. Meanwhile, in moments of danger—which Alita appears to have an irresistible impulse to seek—flashes of her memory return. There’s an ancient enmity underlying the national identity of Iron City residents, a historical grievance against Martians (specifically, against the United Republics of Mars, or U.R.M.) for the twenty-third-century war that caused the Fall. But Alita, as it turns out, is no mere piece of cyberflotsam: she’s a Martian-head, and, to some in her circle, an untrustworthy and incontrovertible enemy; what’s more, Dr. Ido dates her origins to before the Fall—despite her adolescent manner and appearance, she’s more than three hundred years old (shades of “The Makropoulos Case”).

Rodriguez, Cameron, and Kalogridis take an evident pleasure in conjuring a coherent future city—its organization, its history, and even its architecture, which features the ruins of futuristic glass-and-steel buildings along with grandly ornate early-twentieth-century ones. The production design is sharply and emblematically detailed, and Rodriguez highlights it with a welcome graphic clarity. (For instance, the futurism of “Alita” is far more substantial, and less doctrinaire, than the world-building of Steven Spielberg’s “Ready Player One.”) The byways of Iron City are as inviting to view as they’re alluring to its protagonist, and one of the movie’s delights is its fusion of Alita’s discovery of the city with her efforts to discover herself.

These psychological dimensions raise “Alita: Battle Angel” above most of the recent C.G.I.-heavy science-fiction fantasies, and offer intriguing possibilities for the development of character and inner experience. But the movie’s well-imagined world-building and backstory turn out soon enough to be something other than ends in themselves: they mainly set up a double-stranded plot that blends a cookie-cutter skein of superheroic battles with a romance of a faux-naïve cheesiness that bears “Titanic” fingerprints. The character of Hugo is written and directed with an aw-shucksiness that wouldn’t have been out of place in a Mickey Rooney musical, and his romance with Alita has a simple and absolute purity that’s as sentimentally drubbing as it is devoid of substance. It gives rise to an astounding dramatic metaphor, involving the romantic sacrifice of a robotic body part, that’s a borderline howler; it also gives rise to a dramatic climax of a ridiculously, titanically self-plagiarizing melodramatic frenzy.

The romance also features a grotesque and queasy plot point regarding Alita’s cyberbiology: because of damage that she suffers in battle against the stereotypical villains, Dr. Ido has to overhaul her body. Suddenly, Alita’s physique changes: on camera, her metallic carapace grows breasts; Ido explains that this particular robo-body conforms to the brain’s image of itself, and his nurse and assistant (Idara Victor) tells him, “Looks like she’s a little older than you thought.” Rather than resembling the just-adolescent child he took her for, Alita takes the form of a human teen-ager or young adult, an age where romance with Hugo isn’t predatory; but the script and the image treat Alita and her body as the plaything of a cinematic romance rather than a subject of her burgeoning consciousness or sense of identity. (What’s more, the movie doubles down on its smarminess with the added detail that her revamped body is far more touch-sensitive than before. In such moments, Cameron’s sentimentality fuses all too well with Rodriguez’s brand of cine-erotic leering.) Of course, it turns out that, despite Alita’s young-adult look, she’s three hundred years old, which is another story altogether—and yet another aspect of her character that’s completely unexplored.

Much of the film involves the back-room villainy of a Motorball impresario (Mahershala Ali) and his partner in crime, a doctor (Jennifer Connelly), who is also Ido’s ex; unfortunately, even this plotline, an incipient “High Flying Bird”-style riff on the business of Motorball, is tossed away, too. Alita also confronts the villainy of another, archly sardonic bounty hunter (Ed Skrein) and a clanking hulk of murderous metalware (Jackie Earle Haley). The robotic plotting leaches the inventive energy from Rodriguez’s direction; the churning and pompous virtuosity of the action sequences show off expensive toys rather than their inventive use. Along the way, there’s also a brief but unmistakable Second Amendment riff about the banning of guns in Iron City—in order to prevent resistance to Zalem’s rule—and one of Alita’s signature triumphs involves her access to forbidden firearms. The movie’s patterned anti-authoritarian, anti-organizational, freedom-fighting themes are as vain and demagogic as its characterizations. Rather than explore complex issues and troubling experiences by way of sci-fi future-historical fantasy, “Alita: Battle Angel” debases them—and its exemplary character—under the force of a blinkered and reactionary model of drama and business alike.

Why coders want to optimize the world

Poroshenko Asks World for ‘Formula to Counter Russia’s Meddling in Any...

Second Russian Military Aircraft Leaves Wuhan With 64 People on Board