Home Culture “Amazing Grace” Gives Us Aretha Franklin at the Spellbinding Height of Her... 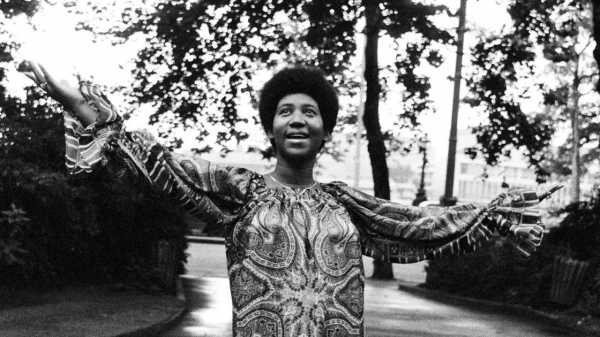 One of my favorite moments in all of music is from the album “Songs of Faith,” which Aretha Franklin recorded live, in 1956, at the New Bethel Baptist Church, in Detroit, when she was barely fourteen years old. Having already sung a sweet, sorrowful version of Thomas Dorsey’s gospel classic “Precious Lord,” Franklin begins to hoarsely moan. She goes on for close to three minutes—almost as long as her delivery of the song proper—sometimes shouting, sometimes intensely humming, finally tossing out the final phrases of Dorsey’s song, less, this time around, to convey their meaning than to explore their potential as a vehicle for melody. At one point, near the end, she drops into a melisma so dense it’s impossible to describe. The run is like a syllabus of black scalar material: a pentatonic plunge here, a gospel tremble there, some sweet soul swoops holding the whole thing together. The intelligence and self-reference of the moment makes it almost funny.

Franklin wasn’t simply the soul singer par excellence. She was also a kind of historian of vocal performance, almost teacherly in her eagerness to point out how soul, still in creation as she set out to master it, had one foot—melodic and attitudinal—in the blues, and the other—harmonic and ecstatic—in the gospel. “Amazing Grace,” the concert film that débuted at the DOC NYC film festival, last month, after many years of delay, and which opens at Film Forum on Friday, shows Franklin in this impressive mode: artist and archivist. The movie documents Franklin’s recording of the live album “Amazing Grace,” at the New Temple Missionary Baptist Church, in Los Angeles, over two nights in January, 1972. Aretha was backed on both nights by the great gospel singer, songwriter, arranger, and choirmaster James Cleveland and his excellent Southern California Community Choir. Warner Bros. commissioned the director Sydney Pollack to film the sessions, but problems with the sound recording prevented its release at the time, and problems with Aretha prevented its release when the sound issues were finally resolved, in 2010. She sued to stop the movie from screening, insisting that the filmmakers did not have the right to use her image.

It is a stunning image. Franklin dresses, first, in a white, sequinned frock, half-hippie, half-diva; then in a white and green tie-dyed-looking number that would’ve looked just as loose and flattering on Sly Stone. On both nights, an Afro haloes her jarringly young face. The choir members twinkle in spangling outfits—at the outset, they march down the aisles, toward the stage, in a kind of Baptist usher’s bop (eerily like the church ensemble in which my parents met, as it happens). Cleveland not only puppeteers the singers but also acts as a kind of wisecracking m.c., first warming up the crowd, then sweatily helping to move everybody from song to song. But, to Aretha, you can tell, this is not a concert, not a performance for a crowd. Until the end of the last night, she barely utters a word to the people assembled: they’re there, sure, fine, but as props, part of the sonic texture she’d like to achieve, perhaps, and not, at least this time, as a group of patrons to please. Between numbers she averts her eyes and appears to be thinking. She’s a deadly focussed, monastically disinterested professional; the great value of the film is that it lets us see her as she works, as she performs her art without performing for us. One way to enjoy her presence throughout the evenings is to marvel at how unaware she is of the camera. I can’t recall ever seeing an equally undistracted artist on film.

Pollack often swings his camera very close to Franklin’s face, and what you see is all craft. Never does the strain of singing climb the bridge of her nose and onto her forehead’s smooth surface: all the tension’s in the mouth, and in the muscles that surround it. The corners of her lips squeeze inward as she ventures higher into her range—just beneath that signature mixed-voice high spike, the only note that ever makes her really unhinge her jaw—and her mouth squirms into a set of curved brackets, urging the music forward. Her tongue protrudes just so and sits atop her bottom row of teeth. Beads of sweat start popping loose early on, and never stop. The rhythm section that Cleveland pulled together is formidable—the whole band is, really—and this helps, in turn, to showcase Franklin’s own brilliant, and under-discussed, approach to rhythm. She has a quicker heartbeat than most singers; her vibrato hums like a drumroll, and she often fits in four fast notes—airy staccato jabs—in the space between one bass note and the next. As much as her vocal runs communicate melody, they also draw a herky-jerky sketch around the drum kit and the lower tones of the guitar.

Franklin leaves herself and flies into abandon a few times; at each of these moments, she is throwing a rope between herself and the past. Once, singing “Precious Memories” with Cleveland as a duet partner, she starts egging him on with fanciful passages, each of them centered on the blue note, the flattened third scale-degree that gives the blues its ambivalence and emotional dexterity. Cleveland and Franklin excite one another, and soon they sound like duelling Howlin’ Wolves. She closes her eyes and seems happy. In a way, the exercise—filling gospel to the gills with blues sensibility—is a callback to Dorsey, who helped, through “Precious Lord” and many other compositions, to bring the secular sound into the church and start the motion that would culminate, amazingly, in Aretha. Similarly, on the second night, toward the end of the film, she strolls over to the piano—she’s got a mean tomtom of a left hand that gives her playing a jutting edge—and plays “Never Grow Old.” She’s not too far from where her father, the famous preacher C. L. Franklin, sits, flanked by friends. “Never Grow Old” is an old song, but Aretha claims it, making her elders trade expressions of devotion, glee, and terror at her talent, and dismay at the passage of time. People cry and throw their towels.

I’ve known preachers’ kids all my life, and, watching Franklin here, so clearly respectful of, even cowed by, her father, made me consider her personality, and the music it produced, afresh. She was, as David Remnick detailed in a recent profile, embedded deeply into the byways, hierarchies, hidden codes, and often bitter familiarity of the church—so deeply that she must have been ever so slightly alienated from the scene, and able to make of it a dispassionate study, even the subject of a private joke. Maybe that’s how she achieves such distance from her fans, and also the kind of parodic control that leads to mastery. After “Never Grow Old,” she sits and rocks for a bit, then starts to sing again, seemingly impromptu, now a refrain of “I’m So Glad I’ve Got Religion.” She knows that everybody knows it. She probably wants to hear the hollers.

The show is a cataclysm for the crowd and for the choir. They cry and shout—at Aretha or God, it’s hard to tell. Just two nights at the office for this great artist at the earliest of her several peaks. On film, we see every shivering bead of sweat and flex of the mouth. It works as entertainment—musical, visual, emotional. But Franklin was only worried about the sound.

No Arrest Yet But Cops on Verge of Cracking Indian Varsity...