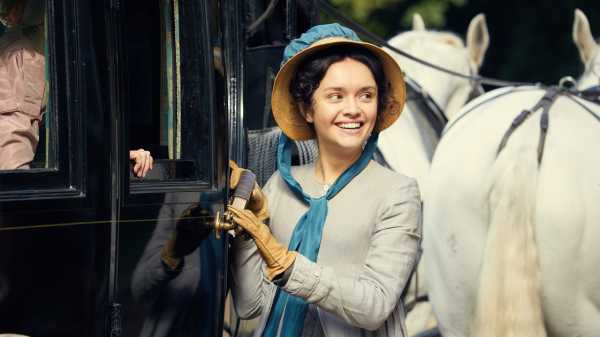 The title sequence of “Vanity Fair” (Amazon) rears up to the inexplicable accompaniment of a sultry cover version of Bob Dylan’s “All Along the Watchtower.” The camera appraises a carrousel’s grimacing horses. Striding toward them is a figure in a top hat—William Makepeace Thackeray (Michael Palin), the author of the novel that is lightly desecrated in this seven-part miniseries. The carrousel is fringed with electric lights—quite a novelty for a story that opens in the Regency era. Then again, this adaptation’s reckoning with antiquated structures is both a point of interest and a source of bother.

Becky Sharp (Olivia Cooke) is, of course, our clever antiheroine and hall-of-fame social climber. Secondary characters beam with awe at her vivacity, even those who are confident that she is, to quote the novel, an “artful little hussy.” In the title sequence, she throws her head back and howls like a wolf, which is ridiculous but at least energizing. Palin’s Thackeray advises the viewer to buckle up for a trip to “a world where everyone is striving for what is not worth having.” He lost me there: Is money not worth having? Is he saying that life is but a joke? There is plenty of folly on offer here, but Becky is striving to marry for money because that is her only means to escape the fate of her low birth. Her late father was a debt-ridden artist; her late mother was “an opera girl,” a job title that another character here excitedly describes as a euphemism for “harlot.”

Becky first comes into focus in a corridor at Miss Jemima Pinkerton’s school for young ladies, where she has earned her keep as a French tutor. Immediately, she addresses the camera with a conspiratorial arch of eyebrows. Cooke regularly breaks the fourth wall with mannerisms of this sort—confidential glances and exasperated glares, expressions that are the analogue of stage whispers. Becky exists at an ironic distance from other characters, which is this adaptation’s way of flirting with revisionism. The audience joins her in rolling her eyes, and we lose perspective on what makes Becky most compelling as a character. Rarely does she resemble the soulless grifter of the book. Mostly, she’s a charmer whose circumstances justify her means.

Leaving school, Becky begins her career in big-game husband-hunting by spending a week at the London home of her only friend from Miss Pinkerton’s, Amelia Sedley (Claudia Jessie, who devotes a lot of guile to portraying sweet-natured naïveté). Becky tries to pry a marriage proposal from Amelia’s brother, who has a lucrative position in the colonies with the East India Company. His parents are not strictly opposed: Becky is, unlike the women of the subcontinent, “a white face at any rate.” (Their black servant Sam—an update of the novel’s Sambo—openly gives this comment the side-eye, in a way that doesn’t seem appropriate to the period; here and elsewhere, the show’s politics are more coherent than its atmosphere.)

But Joseph ghosts, and Becky is off to Hampshire to work as a governess. Her employer, Sir Pitt Crawley (Martin Clunes), has more status than he does money, and he is possessed of all the elegance of a barn cat, but, on the bright side, his second wife is looking pretty frail. In her off-hours, Becky works overtime ingratiating herself with a wealthy relative, Lady Matilda Crawley (played by Frances de la Tour with fantastic zest, like a juicier version of one of Maggie Smith’s dry dowagers). Becky has made good progress with Lady Matilda by the end of Episode 2; Madonna’s “Material Girl” rises to the soundtrack to celebrate their bond, a bit of musical accompaniment so on the nose that it may impair your breathing. Though each installment concludes with a blast of modern pop, the body of each episode adheres to a period-appropriate tone, straight ahead and excessively pleasant. The bonnets and wigs are pretty; so is the Battle of Waterloo.

In Episode 3, the second Lady Crawley falls down the stairs. “Is Mama dead?” wonders a daughter, with more curiosity than concern. She is dead, indeed, and Sir Pitt perks up and rushes to propose to Becky, only to learn that she has secretly married the dashing young gambling addict Rawdon Crawley (Tom Bateman), who is his son and Matilda’s favorite nephew. Or was her favorite nephew, until she gets wind of the marriage. “Treasure hunter!” Matilda shrieks. Strings shriek, too, and the camera tilts with nausea: the show erupts, briefly and amusingly, from an unpersuasive love story into a spinster’s personal horror film.

My chief complaint with these events as depicted in this adaptation (created by Gwyneth Hughes) is that Becky seems to feel genuine affection for Rawdon as a person, as opposed to a source of income. And, even in her gold-digging, she’s appealing: Like Mira Nair’s sumptuous 2004 adaptation, which starred Reese Witherspoon, this version translates Becky’s conniving into endearing pluck. It doesn’t entirely disapprove of her slyness. We’re sympathetic to her hustle—you gotta what you gotta do—but our sympathies would be alien to Thackeray, who imagined her as a pure opportunist, aiming to hoodwink fools and snobs. The subtitle of “Vanity Fair” is “A Novel Without a Hero,” and the substance of it describes a world without heroism. Softening Becky’s edges and defanging the story’s satire, Amazon offers a self-contradictory miniseries without much of a point.

Photos: Devastation Inside Torched US Embassy in Baghdad Revealed