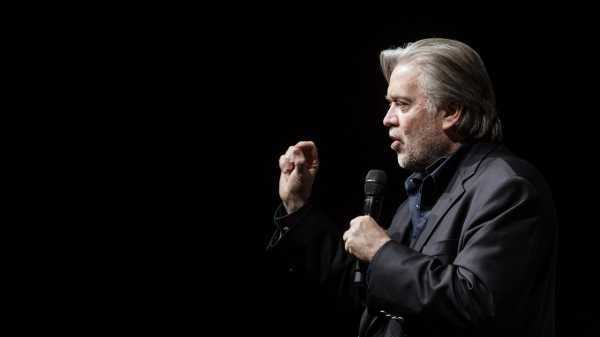 Errol Morris’s “American Dharma,” which screened twice at the New York Film Festival this weekend, is, for the most part, a set of interviews with Steve Bannon. Its subject isn’t so much Bannon’s personality or biography as his political ideas and activities, particularly relating to the campaign and Administration of Donald Trump. Which is to say that the movie is of the greatest moment, and was released at one of our nation’s most monstrous moments. Morris, in his introductory remarks at the showing on Sunday night, stated that he made the film because he felt the need to “do something” after the 2016 election.

Morris’s earlier films with political villains, “The Fog of War” (about Robert McNamara) and “The Unknown Known” (about Donald Rumsfeld), had the benefit of contemplative distance. “The Unknown Known” was criticized, at the time of its release, for going easy on Rumsfeld; but Rumsfeld, who wasn’t in a defensive mode, spoke freely and tangled himself up for all to see. “American Dharma,” by contrast, was made in the heat of action. Even if Bannon is no longer in the Trump Administration, his ideas are still active within it, and he remains influential internationally (he played a role in the success of the nationalist far right in Italy’s recent election, and is trying to do the same elsewhere in Europe). In an understanding of who Bannon is and what he stands for, lives are literally on the line, and Morris, in the film, acknowledges that the stakes are extraordinarily high. Unfortunately, even with the best of intentions, he often doesn’t meet the demands of his subject. “American Dharma” succeeds neither as journalism nor as portraiture, neither as political critique nor as cultural survey nor as psychological study.

Though Morris challenges, and even insults, Bannon, he does so inconsistently. He fails to confront some of the most fundamental conceptions or misconceptions that Bannon delivers, and he contrives a portrayal of Bannon—with Bannon’s active complicity—that remains peculiarly ambiguous. As a result, far from dispelling the rank assumptions of Bannon’s doctrine, the movie buys into some of them, though clearly unintentionally. It isn’t Bannon’s presence in the film but Morris’s presentation of him that may leave a viewer feeling the need for a quick post-screening shower.

Morris’s framework for his questioning of Bannon is movies—classic Hollywood movies, of the sort that Bannon, who once worked as a producer in the film industry, discusses with enthusiasm. Morris builds “American Dharma” around one particular movie that Bannon cites as his personal exemplar, the drama “Twelve O’Clock High,” from 1949. It’s based on the true story of a U.S. Air Force unit in the Second World War that was suffering high losses and growing demoralized; a new commander (Gregory Peck) comes in, takes over, and, with tough love, risks alienating his men as he hardens them for battle.

Morris’s interview of Bannon takes place not in an office or on a stage but on a set: in a Quonset hut, a replica of the one from “Twelve O’Clock High” that serves as the flight crew’s headquarters, that was built for the documentary. (Morris also copies other furnishings from the movie as settings in which to depict Bannon.) This peculiar aesthetic framework provides the springboard for some discussion of “Twelve O’Clock High” and also other Hollywood classics of the nineteen-forties and fifties that Bannon considers founding American myths. Bannon prattles on about how “Twelve O’Clock High” “defined what it took to be a man” and “what it took to be a hero,” whereas a clip from that movie that Morris includes shows a room full of white men in uniform, and the filmmaker never presses Bannon on whether that segregated, single-sex Army represents his American ideal. (Nor does the filmmaker press him on other varieties of American heroism, such as civil-rights activism.)

Throughout, Bannon upholds classic movies as defining “our idea of what it is to be American,” and as offering American myths as models for the “populism” that he himself purveys without considering who’s omitted from that definition. Morris compounds this omission throughout his film, as when Bannon returns to his favorite theme, that of the “common man,” the “working man,” and the value of this exemplary man’s life, and Morris never once asks Bannon about the lives of working women, about the killing of black people by police, the mass incarceration of black Americans, the suppression of the votes of people of color, the camps in which migrant children separated from their parents are being held. Bannon cites “Judeo-Christian civilization” and even characterizes himself with the Yiddish term schmendrick, or “fool,” but Morris doesn’t ask Bannon about the anti-Semitism that is rife on the political far-right today.

On the other hand, Morris does deliver some bursts of confrontational insight, as when he distinguishes “good Bannon,” the defender of “disenfranchised people” (though, again, there’s no follow-up about whose franchise counts), from “bad Bannon,” whose hostility to DACA and aid to “polluters,” “big business,” and “the rich” is “anti-populist.” After highlighting these “contradictions” in Bannon’s views, Morris says, “That’s what makes me think you’re crazy.” At such moments, Morris’s interview technique, involving multiple camera angles (some oddly oblique), voice-overs, and brisk editing, is distracting, and sometimes worse than distracting: it denatures the critical moments of confrontation and turns them synthetic, even inauthentic.

At another moment, after Bannon has emphasized his harnessing of the “angry voices” that filled the comment sections of Breitbart News (of which he was formerly executive chairman) and declared that Trump’s electorate was telling “the establishment, ‘go fuck yourself,’ ” Morris turns the tables on Bannon, calling Trump the “fuck you” President: “You want health care? Fuck you. You want clean drinking water? Fuck you.” Bannon’s momentary silences in the face of such remarks seem like an onscreen scorekeeping (chalk one up for Morris), but it is far less satisfying than a further, confrontational follow-up question might be. Many of Morris’s challenges to Bannon’s assertions come not in discussion but in a sort of cinematic esprit de l’escalier, by presenting (with a variety of effects) headlines, tweets, quotes, and clips that undercut or contradict some of Bannon’s claims.

Above all, Bannon fills plenty of time with unanswered quasi-philosophical mumbo-jumbo, in which he repeatedly forecasts revolution in the absence of drastic change and speaks of the “third turning” and the “fourth turning.” He looks to military history, Greek tragedy, Shakespeare, historical anecdotes, conspiracy theories, and dashes of William F. Buckley and Ayn Rand. His self-proclaimed role as an “apocalyptic rationalist” and his eagerness for salutary destruction could be borrowed from the ending of “Atlas Shrugged”—a scene of societal collapse and mass suffering at which he has the distinctly élitist privilege of being a spectator. Morris’s concluding metaphors of fire suggest that he’s aware of Bannon’s catastrophically egotistical vision, but he doesn’t quite draw it into cinematic focus. (The symbolic apocalypse is, among other things, victimless, even self-sacrificing.)

The interviews with Bannon are, throughout, chopped up and pieced together, and are punctuated with oddball angles, voice-overs, and conspicuous cuts that have the over-all effect of detracting from the actual interview and offering, in its stead, an audiovisual collage of Bannoniana. There’s nothing reflexive in the movie, no sense that Morris and Bannon are collaborating in the staging of several scenes that recreate Hollywood themes and moods, no sense that the interview, staged in a contrived setting, is itself an elaborate dramatic construction. In his desire to make a movie about Bannon rather than merely to film an interview with Bannon, Morris does too much; the lack of simplicity proves also to be a lack of clarity.

The failure of “American Dharma” is an aesthetic failure; though Morris is a thoughtful analyst of documentary practice, here his methods get lost in his intentions, to the detriment of both. Morris emphasizes Bannon’s own skillful manipulations of media, his own effectively staged photo ops and meme machines, and “American Dharma” plays like an effort to compete with him on the same stage. But, instead of cutting through the media sludge of banalized discourse and sustaining analytical patience and precision in the face of sloganeering, instead of focussing on the specific implications and effects of what Bannon is saying, Morris contributes to, and sinks into, the same sludge that yielded the current-day political outrages to law and decency that he himself fears and reviles.

The fall equinox is Monday: 9 things to know about the...

In the race for grassroots donations, it’s a battle between Elizabeth...