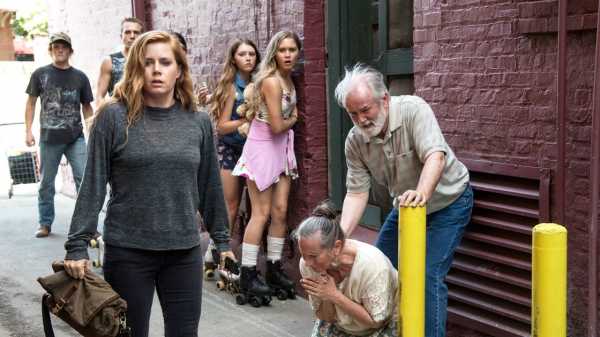 In “Sharp Objects,” on HBO, Camille Preaker (Amy Adams) undertakes a homecoming and swiftly comes to inhabit a domestic thriller with a sultry sense of place. In the first episode of this eight-part miniseries, Camille returns to Wind Gap, Missouri, where the palpable closeness of the air inspires claustrophobia. Camille grew up in a mansion with the lonely profile of a stout Edward Hopper house. It’s “just off Bluebird Circle,” as she tells the police chief, needlessly, for her family is locally powerful and the chief is among its vassals. Inside the house, beyond the balustrade of a staircase styled with Hitchcock vibes, one upstairs bedroom is a shrine to Camille’s sister, who died in childhood. Another belongs to Camille’s adolescent half-sister, Amma (Eliza Scanlen), who seems to have seeped in from a horror flick. The triumph of the show, which was created by Marti Noxon and directed by Jean-Marc Vallée from a novel by Gillian Flynn, is to present a suspense tale that reveals a fine drawing of an unravelled protagonist.

Camille is visiting from St. Louis, where she works as a newspaper reporter, because her editor assigned her to cover a murder story. Before she arrived, one young girl had been found dead and another had gone missing. The corpse of a second victim soon materializes, with a grisly flourish, propped up in an alleyway near the center of the town. Camille’s editor wants journalistic scoops, tearjerking ledes, first-person essays on an American tragedy, and women-in-peril narratives. Crucially, he also wants the self-destructive Camille to rehabilitate herself by confronting her personal history. Camille’s father is missing from the narrative, a strategically unexplained absence. In the vacuum of his absence, amid the show’s sensitive consideration of sisterhood and its sensational take on bad mothering, the editor serves as a spectral father figure. Avuncular but vulnerable, addressing Camille on the phone as “kiddo” and “cub” while managing his own self-medication routine out of her view, he’s a troubled friendly spirit in a story full of personal demons.

Camille is the sort of alcoholic for whom vodka is a daily breakfast staple. Well-practiced in converting her stagger into a strut, she proceeds through the day clammy with booze sweat and haunted with pain. She is recovering from a habit of self-harm, of cutting herself so prolifically that her body, carved with words from ankle to wrist, speaks a private language of anguish. This newspaper writer drafts her pain on her flesh: “Sharp Objects” can be evocatively pointed with its figures and images. Its sick-joke surrealism ripens the mood. The economy of Wind Gap exclusively depends on hog butchering, for instance, and there’s something wry and grotesque in the way that images of pigs—on restaurant storefronts and faded billboards, as cute toys and kitschy knickknacks—recur throughout this sensitive study of violence against flesh. In context, the prop pigs seem like gentle reminders that human life is lived on a slaughterhouse floor.

Camille’s mother, Adora, is played by Patricia Clarkson to suggest a crystal tumbler brimming with toxic sweet tea. As the inheritor of an industrial hog farm, Adora is the town’s leading citizen. The benefits of her status include immunity against the malicious gossip of local biddies and dominion over a husband (Camille’s stepfather) who barely outranks the housekeeper. Her fortune underwrites the popularity of Camille’s half-sister. Amma and her precocious mean-girl peers flit through Wind Gap on roller skates, with their wheels rumbling like they’re looking for trouble; at times, they flicker into view almost subliminally, like portents. At home, Amma performs an antique and docile femininity to placate her mother’s demands. With ribbons in her hair and secrets in her eyes, she’s the sum of the twins in “The Shining.” In a masterstroke of creepiness, Adora coos at her perfect doll while the mother and daughter play with a scale model of their home.

The plot builds such that the murder mystery hatches the suspense tale of Camille racing against the past, which is never dead. Her consciousness flickers to the screen in a Southern Gothic stream of gory memories, ghostly mirages, half-repressed remembrances, and flares of grief. The flow of fragments, of flashbacks to adolescence and other formative traumas, pools into a psychological portrait of a damaged person. Adams conjures her woundedness without sentimentality. In a performance that is raw but understated, she elicits thrills and occasions sadness, at the center of a tale about a house haunted by itself.

How mocking anti-Semitism got a Trump official falsely accused of actual...