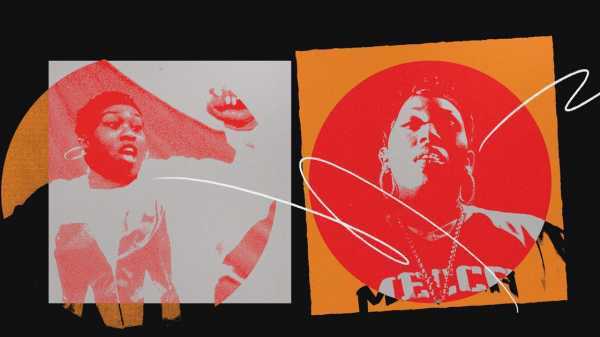 The 1997 album that defined a new Hip-hop aesthetic and expanded the definition of rap.

“Touchstones” is an ongoing digital series in which New Yorker writers guide us through their favorite works of art.

During the summer of 1996, radio was blasting a sound that was mysteriously post-lingual. Was it an exclamation point, an orgasm, the last letter in a foreign alphabet, an ambush? It was
a verse by Missy (Misdemeanor) Elliott

on the remix of Gina Thompson’s “The Things That You Do.” We can think of it as a proto-meme: it went “viral,” and d.j.s began inserting it into their sets. Everyone was calling its inventor the “hee hee haw girl.” “The Things That You Do” was Elliott’s début. In the video, she does footwork in a baby-blue tracksuit and wears her Cheshire Cat grin, looking all too aware of the future to come.

By the time of “The Things That You Do,” Elliott, born Melissa Arnette Elliott, and her creative partner Timbaland, a childhood friend from Virginia, had left the Swing Mob collective (a label started by Jodeci’s Devante Swing), and made a name for themselves writing and producing for R. & B. acts such as 702, SWV, Ginuwine, and Aaliyah. They had been shaped by the lush moodiness of Quiet Storm, the style that defined the genre from the mid-seventies to the mid-eighties, and the clubby energy of New Jack Swing, from the late eighties and early nineties. Hunting for the next phase of R. & B., Elliott and Timbaland imagined a sound that was guttural, spare, sticky, proto-electronic, and post-funk.

Elliott and Timbaland looked to styles as disparate as house, drum n’ bass, and psychedelia, and melded their effects in a single track.

“One in a Million”

It seemed for a while that Elliott was fine with being the behind-the-scenes industry player, but everything changed when, in July of 1997, she released her solo début, “Supa Dupa Fly.” With this album, Elliott was thinking beyond impulses like realism, which defined the rap of the eighties and the gangsta rap of the early nineties, and materialism, which preoccupied the new black conglomerate class. To borrow from Audre Lorde, “Supa Dupa Fly” is a kind of biomythography. Most interviews from the time linger on Elliott’s shyness, which didn’t seem to square with Missy Elliott the performer, imperious on her album cover, about to casually stomp us with the sole of her crisp-white sneaker.

Elliott and Timbaland wrote, produced, and recorded “Supa Dupa Fly” in a little over a week. The album was released on Elliott’s Elektra Records imprint, demonstrating a level of control that was rare for a female artist at the time.

Iwas too young to witness Elliott’s rise as it happened. I fell into her catalogue a few years later, at age ten. A local radio station was offering a prize to whomever could figure out the meaning of the gibberish chorus to her massive hit “Work It,” on her fourth album, “Under Construction.” The contest inspired a minor crisis within my group of friends. Elliott was somehow both intimidating and enticing, like a stranger speaking in friendly tongues. At recess, we brought pilfered loose-leaf to the concrete yard, and wrote out the verses, searching for some embedded code. We never figured it out, but we did end up learning every lyric, which we shouted together like a shared incantation.

The chorus of “Work It” features the line “I put my thing down, flip it, and reverse it,” literally reversed.

Drag left or right to play forward or backward

The “words” turned out to be meaningfully meaningless. A recording error caused the vocal for “I put my thing down, flip it, and reverse it,” to play backward. Rather than trash it, Elliott made it the next line. The adaptation perfectly captures her understanding of making music as an act of free association, recombination, collaboration, and, more than anything else, extreme openness to the idea that any noise has potential. This omnivorous approach is all over “Supa Dupa Fly.” Sometimes Elliott would eschew words altogether, preferring a rawer form of expression, such as scatting,
as we hear on the aptly titled “Izzy Izzy Ahh.”

Timbaland and Elliott developed a grammar, collecting extra-musical noises—sighs, women giggling, coughs, babies gurgling—and stacking them so that they became instruments in and of themselves. They weren’t afraid to experiment with sounds that were nearer to the grotesque than the beautiful. One of the most well known is the
burping bass on Ginuwine’s sex romp “Pony.”

As if a sort of family crest,
it recurs on Elliott and Ginuwine’s carnal duet “Friendly Skies.”

Hip-hop artists are musicologists, and sampling is one way histories are folded into the present. The production of “Supa Dupa Fly” is visionary in how it obscures recognizable samples, bending their internal structures to fit the album’s unconventional tempos. “Sock It 2 me,” for instance, samples
the menacing beginning of a horn progression

from the Delfonics’ “Ready or Not,” but not its resolution,
drawing out its flitting darkness to anchor the entire song.

This is especially forward-looking when we consider that another influential producer of that era, Sean Combs, a.k.a. P. Diddy,
was using samples as patina, to elicit an atmosphere of nostalgia.

Elliott and Timbaland envisioned a futuristic sound in which the organic and the synthetic were complementary.

“Supa Dupa Fly” landed at No. 1 on the Top R. & B. Albums chart. (This was two years before Billboard lumped R. & B. and hip-hop together, and therefore contributed to the conflation of the genres, in 1999.) The first time we hear Elliott on the album is on the second track, “Hit Em Wit Da Hee,” which refers to her star-making verse on “The Things That You Do.” Elliott isn’t rapping, though—she’s singing. Elliott was a pioneering rapper-singer, a performer who toggles seamlessly from each mode to convey a different emotional charge. It has become a staple move for artists since.

A generation later, the vast majority of rappers are also vocalists, incorporating a sing-song technique in their flows.

“When I Was Broke”

No one would deny that “Supa Dupa Fly” is a hip-hop album. It was largely critically adored. But some were thrown by its experimentalism, its distance from the sociological subjects of classic hip-hop. A cynical ear could dismiss Elliott as lackadaisical, overly improvisational. Elliott understood that hip-hop could be a channel for the avant-garde, and that performance conveyed its own authenticity.

Finding the aesthetic of “Supa Dupa Fly” when I did, in the early two-thousands,
recontextualized everything I was seeing in popular culture at the time. The shiny vinyl red catsuit that Britney Spears wore in the video for “Oops!… I Did it Again” seemed to originate with Elliott’s look in “The Rain.” The album is a fertile germ.

The feminist sexual positivity of the nineties varied wildly. Some artists decided to get as explicit as possible, as a way of preëmpting the male gaze. Growing up, I had some elementary notion that the hypersexual fantasy of an artist like Foxy Brown was radical, but I was also hugely intimidated by it. It was Elliott’s theatrical approach that appealed to me. As a girl, cycling through her archive, I became obsessed with her obliqueness.

Elliott fashioned a vision of black female sexuality that decentered the body. She was often cloaked in costumes, in slabs of makeup, frolicking in fantasy worlds. She embodied the “ghetto fabulous,” the impossible reconciliation of opposed fashions. Sometimes she wasn’t even human. Elliott seemed plugged into the cyberfeminist premonition that the Internet would usher in a post-gender age. On “Supa Dupa Fly,” Crisco oil is erotic, and unrequited love can be the sound of rain against the window. Elliott’s approach to sex and female pleasure was empowering because of its thickness—because it was coded, available only to those willing to do the work of unscrambling.

Each music video for “Supa Dupa Fly” was directed by Hype Williams. Williams was the most important architect of the nineties’ hip-hop visual aesthetic, which relied heavily on the distorting effects of the fish-eye lens. Working together, Williams and Elliott channelled a kind of Afrofuturist style, a set of looks whose influence can be seen in the work of artists as disparate as M.I.A., Tyler the Creator, Grimes, Janelle Monáe, and Rihanna, and even distantly in films, most notably “Black Panther.”

The radio is stuck right now. Everything sound the same. As far as video-wise everything look the same. So we coming in to change the whole thing.

In the video for “Sock It 2 Me,” Elliott and Da Brat are marooned on an alien planet and find their way onto a chrome spaceship. In the clip for “The Rain,” Elliott dances robotically in a leather suit, commonly mistaken as a “trash bag,” picked by the stylist June Ambrose. It would become iconic. It’s hard to describe how indelible these images were to a young black girl starting to learn that this planet is inhospitable to her body. Later on, I would read texts by Joan Morgan, about black feminism and rap, and Mark Dery, about the propositions of Afrofuturism, which contextualized the historical and aesthetic movements that produced a phenomenon like Elliott. I would study P-Funk and Little Richard, and learn that Elliott was another communicator in a long line of black escapists. Gaining this education amplified my feeling that the way Elliott mixed the high and the low, the earthly and the extraterrestrial, the soulful and the cool, made her a genius.

The album is a treatise on that ineffable feeling of “flyness.” (The title track itself is a play on the 1972 blaxploitation film “Super Fly.”) It is a testament to black ownership of black tradition. With her fantastical costumes, her oily ability to slip from singing to rapping to elliptical riffing, Elliott was a master inheritor of the black-American art of rule-breaking. By the nineties it was no longer possible to deny that black music was popular music. Elliott and Timbaland changed the course of pop music.

Elliott recently became the first female rapper nominated for the Songwriters Hall of Fame, which feels twenty years overdue. Today “Supa Dupa Fly” still sounds like it was beamed to us from the future. As a young girl, I wanted to live in Elliott’s universe, where boundaries were simply lines to jump over, where the circumstances of one’s birth were not impediments but opportunities for liberation.

The album preached the unifying power of dance, and taught me that performance could be its own kind of genius.

The 1991 album that gave rise to a rock genre and captured the spirit of a new generation.

Subaru Extends Production Shutdown at Indiana Plant to May Over Low...