Home Culture An Eight-Second Film of 1915 New Orleans and the Mystery of Louis... 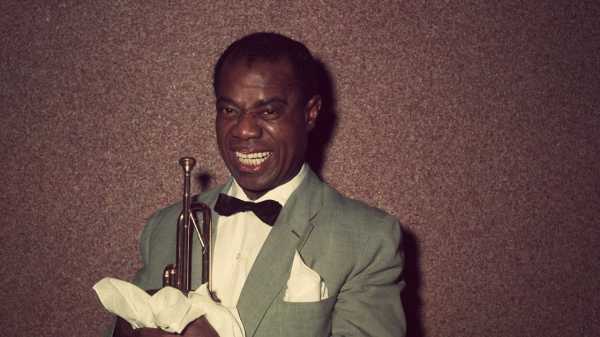 A lot of kids grow up in New Orleans not knowing much about jazz. That was the case with me and my sisters. Never mind that the clarinettist Pete Fountain was always on television back then, or that our neighborhood was only a ten-minute drive from where the jazz master Jelly Roll Morton once lived. It was the early nineteen-seventies, and we weren’t interested in a man that dead. Nor did we care that our tiny house was three blocks from the tiny house where the trumpet player and composer Terence Blanchard was growing up. He was just another boy at the bus stop. We never heard him play.

But, when I was in the third grade, we found a Zenith stereo under the Christmas tree and the Louis Armstrong album “Hello, Dolly!” perched just so in the fake snow. Armstrong looked awful on the cover, all toothy and sweaty. His name was in fat red letters across the top and, in the black, white, and beige image below, he looked feverishly pale. That cover was clearly the work of white people. No black man would ever have approved that much beige. And yet “Hello, Dolly!” made us so happy. Listening to it, I could feel my ears popping open. Scholars now might call the recordings boilerplate Louis, but there’s no such thing. My favorites were “A Kiss to Build a Dream On,” “Hey, Look Me Over,” and the title track, along with “Jeepers Creepers.” Eight-year-olds love the word “peepers.”

Armstrong sounded happy—like he knew something the rest of us didn’t. He was hip to some delightful, mysterious fact. That aura of happiness has amazed and confounded Armstrong fans for more than a hundred years. How could Louis Armstrong, who was born indisputably black at the height of Jim Crow, in New Orleans, and raised in a rock-’em-sock-’em neighborhood known as the Battlefield, and whose family ate from dumpsters and who landed at least twice in juvenile detention, for relatively minor infractions—how could he be so happy? In his own time, he caught hell for it, and, occasionally, he still does. Some musicians called it false or, worse, “tomming,” to gain favor with white audiences. Others were more loving. As Billie Holiday famously said, “Louis toms from the heart.”

But that happiness seems to have come from somewhere deep down, and you can see it, I think, in an eight-second film that the journalist and Armstrong sleuth James Karst recently found and has written about, in the magazine 64 Parishes. If the film is what he thinks it is, and what the jazz scholar Dan Morgenstern agrees it is, and what the Armstrong biographer and Louis Armstrong House Museum curator Ricky Riccardi says he’s almost sure it is, then it may be the most significant finding of Armstrongalia in more than thirty years.

The silent footage, taken by unknown cameramen in 1915 or thereabouts, captures a busy corner in downtown New Orleans, at the intersection of Dauphine and Canal streets, on what appears to be a sunny day. The action moves a hair faster than the reality likely did, as in a Buster Keaton movie. White people are hurrying in every direction—men in three-piece suits and women wearing long-sleeved blouses buttoned up to here and skirts flowing down to there. In their haste, the people sometimes brush against one another. Only a few glance into the camera. Then a nimble black newspaper boy enters the frame, just after the three-second mark. At first, his back faces the lens. Then he turns around and models the front page of the day’s paper, sidestepping the white pedestrians—easy, like a dancer. The boy is ever so relaxed and natural, like Maurice Chevalier walking the Champs-Élysées. He’s thin and dark-skinned; he wears long pants, rolled-up shirtsleeves, and a newsboy cap. He’s on the tall side; he might be a mature eleven-year-old or a dewy teen-ager. When he smiles at the camera, it’s almost impossible not to smile back. He’s friendly. He’s funny. And he’s Louis.

At least, I think so. I’ve watched it a half-dozen times. Karst has done more than that. He’s hired a graphics expert to measure the boy’s features and compare them to later images of Armstrong as a man. He’s contacted all of the best-known Armstrong experts and—despite a few hedges—he’s found the closest thing he’ll likely find to consensus. “I do think this is indeed our man,” Morgenstern, the jazz scholar and friend of Pops, wrote to Karst in an e-mail. “There’s a special aura Louis had and it’s there to me.”

Not every detail in the film fits what’s known about Armstrong’s youth. Armstrong was not a tall man; he peaked at about five feet six. Nor was he particularly slim until his final years. And, depending on the month when the film was shot, he could have been as old as fourteen. “The most I could say is that it could be him—there’s certainly enough facial similarity,” Bruce Raeburn wrote in an e-mail to Karst. For more than forty years, Raeburn curated the Hogan Jazz Archive, in New Orleans, which specializes in oral histories of and research into the earliest forms and practitioners of local music. “He seems taller and thinner and maybe a bit old compared to the two waif’s home images we have,” Raeburn conceded. “But teens grow up fast.”

Getty Images, which has featured the film on its Web site since 2007, has yet to verify its provenance, except to say that it was shot in New Orleans around 1915. It’s unclear exactly why cameramen would be collecting B-roll images of that particular corner downtown. A big hurricane hit the city that year, but the buildings in the film appear unscathed.

Karst thinks that the boy in the film is hawking a copy of the old New Orleans Item, an afternoon paper that later merged with the Times-Picayune. But he’s not yet found the headline we see, “BANDITS WRECK N.O. TRAIN,” in the microfilmed stacks of the Item, or in any newspaper of the time. That headline could have run in an early edition of the paper that’s not kept in the city archive, or perhaps it’s been lost. In his memoirs, Armstrong wrote about a number of jobs that he held as a boy in his home town—scavenging for metal, hauling and selling coal, collecting salable junk, washing dishes, delivering milk, demolishing houses, offloading bananas from ships, playing the cornet at jazz funerals and honky-tonks, and peddling the Item. The city’s census confirms that black boys were selling papers around that time. The 1910 census notes four newsies listed as black; the 1920 census mentions five. And the corner of Dauphine and Canal is a quick walk from where young Louis is believed to have lived, with his mother and sister, and across the street from where the Item later reported him selling newspapers as a youth.

These are the facts that Karst believes place Louis at the scene and in the film. But there is also an intangible quality that can’t be fact-checked: the aura that Morgenstern mentioned, which makes this eight-second film feel like a diamond in a bucket of glass. The newsie, in a matter of seconds, gives a star turn, maybe his first, without ever picking up a horn.

Armstrong rarely missed an opportunity to talk about his earliest years back home. His memoir, “Satchmo: My Life in New Orleans,” is filled with stories about the rounders and other characters that he knew as a child in the Battlefield, people who sometimes took advantage of him but who also rooted for him to succeed. (Black Benny Williams, a wife beater and one of the greatest drummers Louis had ever known, was a kind of fairy god-hustler.) Armstrong describes his mother’s good food; he talks about arguing with his sister, Beatrice, a.k.a. Mama Lucy, and babysitting two stepbrothers, his father’s children from a later marriage (Henry was sweet, Willie not so much).

“I came up the Hard way, same as lots’ of people,” Armstrong wrote in 1970, a year before he died. But in all the stories he told about his childhood—and he had plenty—he didn’t equate “hard” with “unhappy.” No doubt, he could fib. He claimed to be born on the conveniently historic date of July 4, 1900, though a baptismal record shows his actual birth date as thirteen months later. (The late jazz historian Tad Jones found the document at the Sacred Heart of Jesus Church, on Canal Street, in 1988—the last great discovery of Armstrong-related primary-source material.) But no amount of scholarly digging has upended or undermined that bright and apparent tendency toward happiness. “It’s a funny thing how life can be such a drag one minute and a solid sender the next,” Armstrong wrote.

Yes, Louis’s mother likely took suitors to pay the bills. Yes, he saw violence in New Orleans that children should never see. Yes, he had to work from such a young age that he never finished school. But it seems that his mother and grandmother, his sister and father and stepmother, made him feel that their troubles were not so fully his. Plus, he says that they were funny, particularly his mother, Mayann. And when music entered Armstrong’s consciousness—from the time he wore short pants and sang four-part harmonies for coins with the other neighborhood children—it appears to have made up for most everything else that was missing from his life, which is something that music can do.

I almost cried when I saw the film that Karst found. The newsie isn’t much older than I was that Christmas when jazz came to our house. He sure looks smarter, though. Even in silence, he seems to be aware of a world beyond that intersection and its hard-faced passersby. This black boy who can smile so kindly into the camera in New Orleans in 1915. It’s an extraordinary feat. Armstrong looked happy when he felt he had reason to be, just like everybody else. Except he seemed to see his reasons more consistently, more vividly, than the rest of us. That’s what this little sliver of film appears to be saying—right there in black-and-white.

Earthlings Beware: China’s Space Station Will Crash Back to Earth on...