Home Culture An Octogenarian Laces Up Her Sneakers for the New York City Marathon... 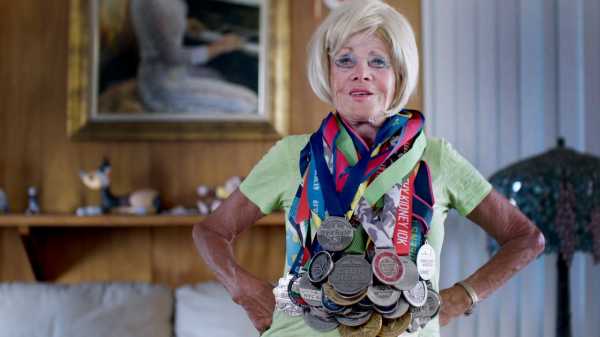 Ginette Bedard, who started racing in marathons at the age of sixty-nine, says that running keeps her happy and feeling young.

The bounds of the marathon are expanding. Earlier this month, the Kenyan runner Eliud Kipchoge, who holds the world record in the marathon—for completing a run, last year, in two hours and one minute—broke the event’s two-hour barrier, a feat previously thought impossible. (A highly choreographed time trial, it won’t count for official world-record purposes.) The following day, Kipchoge’s compatriot Brigid Kosgei set a new women’s world record, at the Chicago Marathon. Now, on November 3rd, when more than fifty-two thousand runners flood the streets of New York for the city’s marathon, Ginette Bedard, a participant who’ll be moving substantially slower than Kipchoge and Kosgei, will mark a milestone of another kind.

Bedard is eighty-six years old. This year’s race will be her seventeenth New York City Marathon, the first of which she ran at age sixty-nine. She is bound to be among the oldest athletes competing on Sunday. At last year’s event, she completed the course in six hours and nineteen minutes, best for first among octogenarian women—of which there were two. “It’s nice to be the oldest, because there’s no more competition,” she says.

Bedard was born in Metz, in northeastern France. She married a Canadian who was stationed at a nearby Air Force base, and the couple moved to Canada and then, when Bedard was twenty-nine, to New York. Bedard began exercising at home, inspired by Jack LaLanne, a mid-century fitness icon famous for his TV exercise programs. (Imagine Gene Kelly, but built like a linebacker.) A colleague got her thinking about marathons, and, after some convincing, Bedard decided that she had what it took to race. In 2005, she set a U.S.-marathon record for women age seventy to seventy-four—three hours, forty-six minutes, and eighteen seconds—which was broken last year. Another record, for women age seventy-five to seventy-nine, which she set during the 2008 New York City Marathon, still stands.

She runs ten miles a day, every day of the year, often on the sand a couple blocks from her home, in Howard Beach, Queens. (The day after last year’s New York Marathon, she took it easy, logging only five miles.) She doesn’t train for marathons, as most participants do; she just runs. “When I do my ten miles, I come back happy,” she says. “Nothing’s going to stop me. I will never quit—never. Unless something tragic—maybe a heart attack or stroke or whatever.” Not even the death of her husband—also an avid daily runner—a few years ago, when he was eighty-nine, slowed her down. “I kept on running because it kept my sanity, mentally and physically,” she says. “You’ll never see me sitting on the couch and feeling sorry for myself. I put on my sneakers and I hit the road.”

Entering into more than fifty local races a year, Bedard is already a fixture in the city’s running circles, and she competes wearing full makeup, including striking blue eyeshadow. “You are being photographed a lot,” she says. “You don’t want to look like an old bag.” At this year’s race, Bedard will be honored as part of Team #MovedMe, a selected group of particularly inspiring runners. “I don’t feel like eighty-six. I feel like thirty-six,” she says. She may not run as fast as someone a half-century younger, but she is running all the same and keeping herself, in the eyes of those who marvel at her prowess and resolution, forever young. It should be no surprise, she says: “You are what you do to your life.”

California is about to ban discrimination against black workers with natural...