Home Culture An “Oklahoma!” for Today | 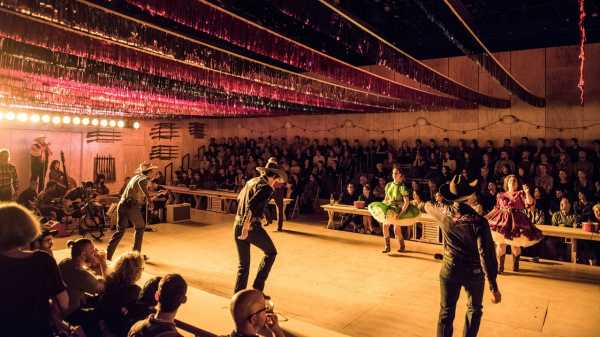 The musical “Oklahoma!” was based, pretty much verbatim, on a play from 1930, “Green Grow the Lilacs,” by Lynn Riggs. The play’s opening in New York, at the Theatre Guild, was revved up by a group of cowboys that had just closed a rodeo show at Madison Square Garden and was hired by the producers, for verisimilitude, to sing the folk songs that Riggs had inserted into the play. The Peddler, who makes love to Ado Annie and ends up marrying Gertie while looking down the barrel of her father’s shotgun, was played by Lee Strasberg. The play was a flop. It ran for sixty-four performances, then slunk away.

Then, in 1942, in a moment of theatre-history kismet, a producer at the Theatre Guild saw a summer-stock production of “Green Grow the Lilacs” and thought that it might work as a musical. She contacted Richard Rodgers and Lorenz Hart, whose hit songs included “Blue Moon,” “The Lady Is a Tramp,” and “Bewitched, Bothered, and Bewildered.” Hart thought the play was corny. Oscar Hammerstein II stepped in. During rehearsals, Hammerstein wrote to his son, who was at sea with the Navy, “I think I have something this time.” The musical, then called “Away We Go,” with an entr’acte dream ballet by Agnes de Mille, opened in March, 1943; the producer Mike Todd walked out after the first act, saying, “No jokes, no legs, no chance.” It later landed at the St. James Theatre, in New York, under the name “Oklahoma!” and starring Alfred Drake, as Curly; Joan Roberts, as Laurey; and Celeste Holm as Ado Annie. The critic Brooks Atkinson took notice. Of the first number, “Oh, What a Beautiful Morning,” he wrote, “After a verse like that, sung to a buoyant melody, the banalities of the old musical stage become intolerable.” The reviewer for the Times wrote, “Wonderful is the nearest adjective. . . . Oklahoma! could be called a folk operetta; but whatever it is, it’s very good.” Hammerstein later recalled, of the audience’s reaction, “The glow was like the light from a thousand lanterns. You could feel the glow.”

“Oklahoma!” was the first Broadway show I ever saw. I was five years old. My Aunt Eve, who loves the theatre, took me to the New York City Center’s revival, which ran for three weeks in the winter of 1965. (Bon mots on the “Theatre Talk” back page of the Playbill that I kept from that performance: “ ‘If you really want to help the American theatre, don’t be an actress, darling. Be an audience’—Tallulah Bankhead” and “ ‘My idea of cannibalism is an actor eating a ham sandwich’—Soupy Sales.”) I was mesmerized. As a little girl, growing up on the West Side of Manhattan, I had no idea where Oklahoma was, nor the slightest notion of what a surrey might be, but no matter. I knew, even then, that this musical was about big things—True Love, and Out West, and Kansas City—and I imagined that someday I, too, would know about those things. (I was right, at least about some of it.) According to my aunt, I sat absolutely still through the entire performance, until the wedding scene in the last act, when Jud, during a fight with Curly, falls on his knife. I was stricken. My aunt broke the family’s cardinal rule (no whispering), and leaned down to say, “He’s not really dead. He’ll be back for the curtain call.” I settled down, clenching my fists through the rousing title song, wondering what she meant by “curtain call.”

A dark, edgy, mesmerizing incarnation of “Oklahoma!” is now on stage at St. Ann’s Warehouse, in Brooklyn. Sarah Larson, in her review, writes that the musical “has always had shadows in its cornfields and a gun in its smokehouse,” and discusses how the director, Daniel Fish, strips away the good cheer to expose darker themes about American history and American life. On a brisk day last week, I met Fish at the Invisible Dog Art Center, in Brooklyn, where he keeps a book-jammed office. He is a wiry, intent man who looks like Raskolnikov, if Raskolnikov wore bluejeans and a black turtleneck and carried a bicycle helmet. Fish has spent ten years, on and off, thinking about “Oklahoma!,” which he first directed, with a student cast, in 2007, while he was teaching at Bard College, and then revived at Bard SummerScape in 2015.

When I recounted my time with Aunt Eve, Fish said, with delight, “I think it was my first musical, too! I went to the theatre a great deal when I was a child, and I believe I remember an amateur production when I was maybe four or five. It was in a barn. They set me up on a window ledge, and I could see the actors getting ready. And I was fascinated, even then, by that dichotomy: the illusion of the stage, and what’s behind it.” He took a bite of takeout sushi, then said, “I’m suspicious of the suspension of disbelief—the cast, the audience: we’re all in the same room together. When the actors go out onstage, I say to them, ‘Someone is going to die tonight. You’re making a choice, and it’s your responsibility to make that choice, and to be present to it, every night you go out.’ ” He paused. “I remember Mary Beth Hurt said a wonderful thing, when she played Juliet. She said that every night she went out and said to herself, ‘I’m going to live.’ ”

Fish, who grew up in Tenafly, New Jersey, graduated from Northwestern, with a degree in performance studies, in 1989. He told me, “As a student, I did a production of ‘Our Town,’ in a football stadium. Investigating what it means to be American is a subject for me.” Fish’s productions in the past decade include plays at the Royal Shakespeare Company, the Signature Theatre, the Long Wharf, and the McCarter. His recent projects include “A (radically condensed and expanded) SUPPOSEDLY FUN THING I’LL NEVER DO AGAIN (after David Foster Wallace),” in which actors interpret an audio stream of the author’s own voice, which changes nightly and is pumped into the actors’ headphones, and “Eternal,” a two-hour film in which two actors, on a split screen, replay, with captivating pathos, the last scene of the film “Eternal Sunshine of the Spotless Mind.” His work is influenced by German experimental theatre, especially Die Volksbühne am Rosa-Luxemburg-Platz, which made a practice of interrogating traditional boundaries. He recalls, now, laughing, “No one in their right mind was going to let me do ‘Oklahoma!’ But JoAnne Akalaitis, who was then running the Bard theatre department, did. The student production was really scrappy. But the wonderful, awkward grace of people that age! The sexuality of people that age! It was the skeleton of the production.”

Susan Feldman, the artistic director of St. Ann’s Warehouse, first saw Fish’s production in 2015, and immediately set about getting it to St. Ann’s. She told me, “What I love is that Daniel’s ‘Oklahoma!’ plays the script. It’s a play about a romance, yes, but it’s about states’ rights, and gun violence, and misogyny, too.” In a number of plays on stage in New York this fall, as we lurch toward the midterm elections—among them the Cheek by Jowl and Pushkin Theatre co-production of “Measure for Measure,” at Brooklyn Academy of Music, and “The Ferryman,” by Jez Butterworth, at the Jacobs Theatre—the ensemble cast is on stage for a good deal of the time, witnessing and meting out judgement. They’re plays about communities in dark times, as if a meta “Our Town” were rising collectively to the rafters. In Fish’s “Oklahoma!,” the entire cast is onstage for most of the first act, silently watching, all but drumming their fingers. By the end, they’ve closed ranks and joined together in judgment.

In the scene I wept over as a little girl, Jud falls on his knife after a scuffle. At St. Ann’s, Jud hands Curly his gun during the final scene, and Curly shoots him with it. It’s a shocking moment. Curly and Laurey, in their white wedding clothes, stand covered in blood. Fish says, “A community is a community because of what’s excluded from the group, and I became interested in what the cost is to the outsider, and the cost to them. In the last scene, after Curly shoots Jud, the community says, ‘You can’t go to jail; it’s your wedding night!’ And they have a mocked-up trial. There’s something to me so American about the last scene, the moment of instant amnesia, of how quickly we move on. It’s not, for example, very German. The Germans eat their history. We have an unwillingness to look at our own crimes.”

In discussions Fish had with the Rodgers & Hammerstein foundation, the trustees asked that Jud’s death not be presented as a cold-blooded murder. Fish explains, “I don’t see the moment literally. Jud walks the whole sixty feet of the stage and looks at every actor. Why does he do that? He says, implicitly, to Curly, ‘I’ll take a step towards you. You’re not going to cock the trigger? I’ll cock the trigger.’ Everyone is complicit. We’re all complicit.” Fish paused, then said, “People go to the theatre for a lot of reasons—to be entertained, to be shocked, to be involved in something, but mainly they go to the theatre to see what’s going to happen. How could ‘Oklahoma!’ not be about our current experience in America? I think about it all the time. People, this week, next week, say, ‘Of course, now it’s about this.’ The theatre happens now.”

Buying the Dip? US Stocks Pick Up But Valuations Remain High

Russian UN Officials Struggle to Get US Visas As UN Chief...