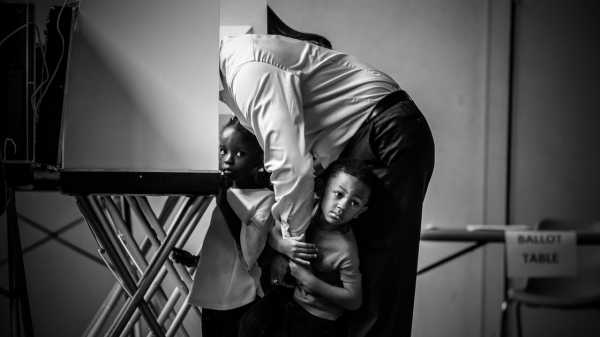 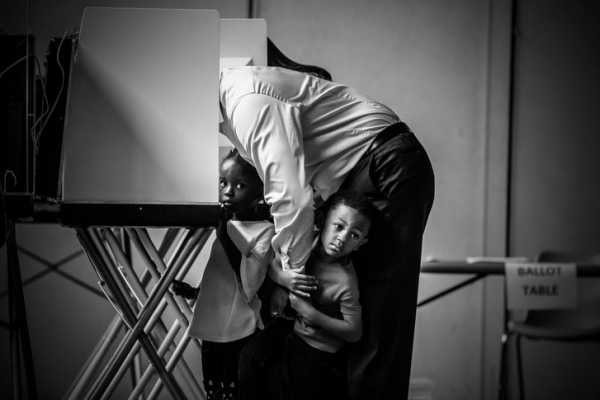 On Tuesday, the Florida gubernatorial candidate Andrew Gillum participated in the ritual of taking his kids to the polls.

Photograph by Mark Peterson / Redux for The New Yorker

Candidates tote their children to the polls; everybody expects it. It’s the cutest and least objectionable visual agitprop: the politician loves the kids—his own, sure, but also yours—enough to teach them a lesson, firsthand, in civic virtue. We viewers, perhaps slow to our polling places, in need of one final motivational push, receive a small thrill of generational duty—a reminder that democracy, at least in its most surface-level, visible form, is still around, and that we get to raise the people who will wield it next. Hope means teaching them our preferences well.

A photo from Tuesday, taken by Mark Peterson for The New Yorker, captures Andrew Gillum, the Democratic nominee in Florida’s gubernatorial race, participating in this ritual. His son and daughter crowd into the the space between his legs and the ledge of the minimally private voting desk where, presumably, Gillum’s ballot rests. Like all self-respecting children, they’re refusing resolutely to pay attention, to the thing that they’ve been summoned to see: nobody but dad is looking at that sheet of paper. The girl is looking warily into the camera’s eye, receding into her father’s body. The boy leans forward and looks off to the side, probably toward the exit, and pulls Gillum’s arm as if to say, “All done here—let’s get going.”

Those opposite expressions, watchful realism and silly, blasé impatience, might stand in for the warring impulses many of us have been managing all day. In the morning, at my polling place, at Brooklyn College, I saw the long lines and competent volunteers and felt like everything might turn out just fine. Then, later, I watched on Twitter as several friends in New York and strangers in Atlanta, Detroit, and elsewhere reported the same long lines, but also many instances of ridiculous dysfunction—broken scanners, spent batteries, not enough machines. I learned, over Instagram, that my least reliable cousin was working at the polls and felt vaguely inspired at the thought of her participation, but also sort of worried for the voting public in the Bronx. Neither apprehension nor excitement on my part would have any effect on the result, I knew, but what else could I do? I tried to concentrate on work, but kept stopping to click around online and oscillate between the emotional poles.

The more adult thing is just to vote and go, like Gillum in Peterson’s lovely grayscale chiaroscuro. It’s funny to see the candidate flanked by his kids, given his reliance, during his campaign, on folksy zingers attributed to his beloved grandmother. You can imagine him taking time to pass them down, insuring that his clan will live to roast on into the future. Here, though, he’s all sobriety, bending down to do his business, his head invisible behind the booth’s white blinders, stoic and single-minded next to his children’s more emotional displays. Whatever your pose today—hope or fear, retreat or march, snark or smarm—the odds are that your attention has been taken hostage by politics as almost never before. Your focus is only right—it’s the grownup thing, your responsibility in a system like ours—but it’s also the sign of an emergency.

Number of Confirmed Coronavirus Cases in South Korea Rises to 16...

Russia’s Services PMI Down to 37.1 Points in March Due to...

The Wheels of History