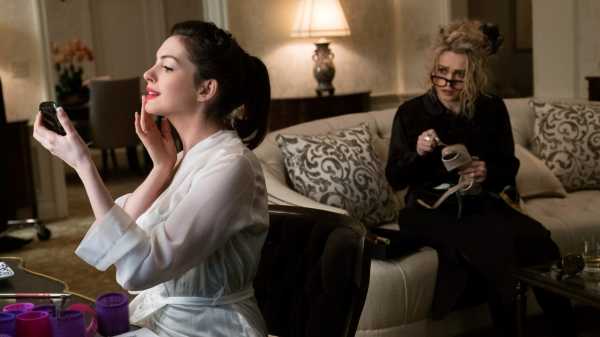 With the influx of coverage for the twentieth anniversary of “Sex and the City” coinciding with our ongoing grifter season—recently extended by the release of “Ocean’s 8” and the news of an upcoming Netflix series based on Anna Delvey—I’ve found myself wondering not whether I’m a Miranda or a Carrie but rather which role I would play on a team planning a heist.

“Ocean’s 8” re-creates the setup from Steven Soderbergh’s trilogy: Sandra Bullock plays Debbie Ocean, who is the sister of George Clooney’s deceased Danny Ocean, and who opens the movie in a parole hearing and leaves jail just like Danny did: in formal wear, with a warmly impassive smile. She heads straight for Lou, her laconic blond sidekick (the Brad Pitt role, played here by Cate Blanchett). Lou balks at Debbie’s plan to steal a diamond necklace at the Met Gala, but Debbie tells Lou they can do it quick, dirty, and cheap. They assemble a jewelry maker (Mindy Kaling), a suburban mom who moonlights as a fence (Sarah Paulson), a skateboarder-pickpocket (Awkwafina), a stoned hacker (the woefully underused Rihanna), a fashion designer with I.R.S. debt (Helena Bonham Carter), and an unwitting actress (Anne Hathaway). When choosing your heist role, there are fewer options here than in the boys’ movies. But it makes sense: if women make seventy-seven cents on the male dollar, “Ocean’s 11” multiplied by the wage gap will give you “Ocean’s 8.”

The Met Gala, overseen by Vogue and Anna Wintour, is an ideal setting, almost a gimme, for an all-female “Ocean’s” movie. I saw “Ocean’s 8” on a Friday night in a movie theatre with a full bar inside it. The diverse audience of white-wine drinkers gasped at a shot of the meticulously arranged Vogue shoe closet; they clapped when the gang descended the steps of the Met in glittering gowns. It’s a pity—perhaps the biggest missed opportunity in the movie—that this remake holds such little visual pleasure aside from these stock-photo moments. It’d be nice if the “all-female reboot” were odder, less straightforward, more beautiful than the male versions—something that felt like the film equivalent of swapping a tux for a surprising Met Ball gown.

Instead, “Ocean’s 8,” directed by Gary Ross, is hypercompetent and artless. Where Soderbergh quieted the slick silliness of the “Ocean’s” movies with a languid, extravagant visual grace, Ross makes everything run like clockwork. The “Ocean’s 11” thieves hung out by the pool at Reuben’s mansion; they capped off their job by watching the Bellagio fountain show in silence as “Clair de Lune” played. The women get few such moments of ease and connection and mystery: the last time they’re all together, they’re riding the M.T.A. Their side conversations double as sponsored content for Subway and Tinder. (Really. A whole scene is set in a Subway, and another one involves Awkwafina teaching Mindy Kaling what Tinder is.) What could be so stupidly grand onscreen—those diamonds and gowns, the Temple of Dendur—is workmanlike instead. Still, “Ocean’s 8” gives the viewer a high-wire, paint-by-numbers heist job, and, at one point, Kelis’s “Bossy” plays over a montage of Cartier necklaces in the sort of salivating closeup normally visited upon models in music videos. Nothing in this movie is trying to be interesting, but everything in it gets the job done.

“There is a thrill about big-con work which no other branch of the grift can duplicate,” David Maurer wrote in “The Big Con,” his 1940 classic about scammers of all kinds. In the book’s first paragraph, Maurer recognizes the con man as the “aristocrat” of grifters: he must use the full extent of his talent and ingenuity, and he plays for extremely high stakes. In one chapter, he notes that there are many notorious female pickpockets, thieves, and gamblers, but almost no women known for the big con. “There are plenty of women today who would make good,” an anonymous con man tells him, “but they haven’t had the chance because they don’t know any good grifters.” Others tell Maurer that conning is too undignified for women, or that women are too impulsive to rely on in the course of a long game.

Thankfully, “Ocean’s 8” mostly skips direct allusions to the particular glass ceiling being broken here. (Of the very few all-female heist movies in existence, none has aimed for this sort of gloss and glamour: they’ve been rougher, like “Set It Off,” or teen camp, like “Sugar & Spice.”) At one point, Lou suggests bringing a man onto the team, and Debbie says, as if delivering the thesis for a different movie, “I don’t want a him! A him gets noticed, a her gets ignored, and, for once, we want to be ignored.” (The movie does not hinge on the women pretending to be wallflowers.) Later, in another clunky, corny statement of purpose, Debbie gives her team a pep talk while speaking, in effect, directly to the audience: “Somewhere out there, there’s an eight-year-old girl in bed dreaming of being a criminal. Do this for her.” This ironic empowerment message is undercut further by Debbie’s true goal, which is to pin the whole crime on her ex-boyfriend, a character so boring that he appears in my head as a large blur.

What will last from “Ocean’s 8” is Anne Hathaway expanding a basic minor part into a career-high performance. In a movie that mostly treats womanhood as something that’s both rigid and incidental, Hathaway, playing the vapid, self-entranced actress Daphne Kluger, delivers a subversive and shockingly funny disquisition on femininity performed to fit. Until a twist that comes late in the movie, Daphne is basically a jellyfish: she appears to have no brain, just a collection of neurons that respond to appropriate stimuli—a mirror, a camera, a younger rival, a handsome man, a compliment, a captive audience, a slight. At a dress fitting, she hyperventilates at the slightest feeling that she might be anything less than magnificently beautiful; as Bonham Carter anxiously reassures her—she has the best neck in the world!—her Bambi features melt back to perfect self-satisfaction. For a few years there, Hathaway’s presence in Hollywood was attached to the narrative that she was trying too hard to be likable, that she was embarrassing herself by showing her work. This performance is a statement—Hathaway understands the game she’s playing—and a heist in itself. She runs away with the show.

Sen. Kamala Harris on Stephon Clark: “A life that should not...