Home Culture “Apollo 11,” Reviewed: A Found-Footage Documentary With No Sense of Discovery | 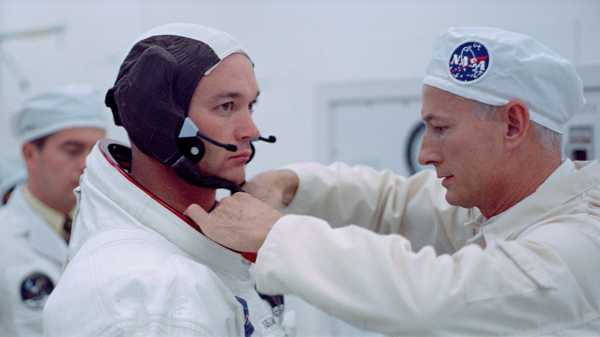 It’s a special sort of achievement to take a collection of footage of the Apollo 11 mission, much of it previously unseen and much of it in the 70-mm. format, and render it dull. That, unfortunately, is what the director and editor Todd Douglas Miller has done in the documentary film “Apollo 11,” which relies almost entirely on archival materials—other film and video footage, plus contemporaneous news reports. (The only additions are some onscreen graphics to provide an explanation of events being shown, as well as a musical score composed by Matt Morton.)

Yet the movie manages to turn the material into visual boilerplate. The most familiar use of such archival material is illustrative—a movie covering the time period of Apollo 11 (July, 1969) or the subject of space travel may deploy some brief clips not to convey specific aspects of the mission but merely to indicate that it occurred. The movie “Apollo 11” manages to capture that feeling of displacement, of nonspecificity, from a few familiarly decorative clips and to extend it through the length of the entire hour-and-a-half feature. Despite the attempt to focus on the heroic actions and extraordinary experiences of its three astronauts, Neil Armstrong, Edwin (Buzz) Aldrin, and Michael Collins, and to display the vast concerted effort on the ground that their flight required, Miller manages only to provide sketches and overviews of the historic event, only intermittently and fleetingly illuminated by a telling or surprising detail.

To begin, the concept of a film composed entirely of found or preëxisting material is a radical one. It calls attention to the material’s specificity, to its privileged authority deriving from its archival status and essential connection to history; it asserts that the material deserves to be treated as something special and invites an artistic approach that’s similarly distinctive. The composition and the editing of “Apollo 11,” by contrast, have no identity, no style or form that reflects the discovery of the material, the sheer wonder of its very existence. Rather, the movie sketches the story of the mission in haste, hitting dramatic high notes and scooting onward, and formulates the episodes of the mission superficially, in familiar chronological and dramatic terms, as if working from the encyclopedia.Throughout the film, the voice-over of Walter Cronkite, taken from news reports at the time, describes and explains, in grave tones and high-flown prose, the succession of events as they unfold onscreen; the effect is to borrow and retransmit the long-sedimented version of the Apollo 11 mission rather than redefining and reconceptualizing it on the basis to what the filmmaker experienced and discovered in the newly found footage itself.

That sense of personal experience is what’s missing from “Apollo 11.” (Peculiarly, the graphics, which provide intermittent breakdowns of particular stages of the mission, often have a greater sense of immediacy and drama.) Miller’s guiding principle appears to be shoehorning as much and as varied an array of footage as possible into the movie’s brief span and to edit it into a slick, smooth unity. He hardly works closely with the images themselves; there’s little visual analysis or emphasis by way of effects, such as slow motion, frame-by-frame advance, digital zooming in, isolating portions of the image, or freeze-frame. His interventionism is of the never-conspicuous kind—the severe trimming of images to help impose an artificial, comprehensive uniformity on the fragmentary and diverse sources. (Miller does occasionally use split screens, putting two or even three images side by side, with the result of further distracting from the specifics of each.) The musical score, which often resembles the sort that could be found in an action film, and which isn’t distinct from the kind often found in other documentaries, is further applied to cushion the images in “Apollo 11” and fit them into the standard audiovisual flow of Hollywood and television.

The figures who suffer most from Miller’s naturalizing and normative approach are the three astronauts themselves. “Apollo 11” conveys mainly a sense of official portraiture; it remains remote from the astronauts’ character, their personalities, their own sense of experience. The one time the movie does try to get close is a woefully misjudged montage, patched into a sequence of the astronauts suiting up that shows a brief flurry of their personal still photographs, depicting in flashes the Kodak moments of their earlier years, as if suggesting that, at the moment, those memories passed through their minds. The concept is as banal and superficial as is its realization.

Some of the movie’s most striking footage shows the hundreds of people who worked in Mission Control during the course of the mission: rows and rows of scientists at long tables, each staring at monitors, panels of pushbuttons, and banks of switches, some taking notes on paper. These images recur, and one in particular, a long tracking shot revealing vastly many rows of technicians, tightly arrayed in long lines, is awe-inspiring—and the speculative wonder that it inspires is instantly thwarted, because Miller never conveys the slightest sense of what any one of them is doing, what functions their switches and buttons control, what structure of consultation and command keeps them working together. It treats them not merely as bit players in the drama but as extras.

Their appearance is nonetheless fascinating—precisely because these scientists, concentrated on their work, all wearing white or blue shirts and ties, are obviously paying no exceptional attention to their appearance. The focussed and distracted casualness of the scientists at work is the kind of fleeting documentary discovery that makes the lack of individuation, the lack of specificity of any one scientist’s actions and efforts, all the more conspicuous.

Such incidental details are the most vital and telling aspects of “Apollo 11.” As the three astronauts prepare for the mission, they get into their spacesuits—which are white with red and blue connectors—and the pure whiteness of those suits has an eerie, otherworldly, pristine brightness that, more than any gesture or expression, suggests the momentous strangeness of the mission at hand. (Also, the photographers snapping with still cameras and cinematographers with hand-held movie cameras are themselves wearing sanitary suits and caps.) The elevator and jib that stand next to the rocket on the launchpad are also a stunning white, set off by the bright, artery-like red of the tubing that runs its entire length.The terrifying burst of flame at lift-off, the crinkly gold mylar seeming duct-taped to the legs of the lunar module, the sight of boot prints on the lunar surface, and the peculiarity of a long and wiggly cable that tethers Armstrong’s camera to the craft are among the idiosyncratic details that hint at a strangeness of experience that most of the film breezes past.

The one space sequence that Miller renders in concentrated fascination is the re-docking of the Eagle (the lunar module) and the Columbia (the capsule in which Collins orbited the moon while Armstrong and Aldrin landed and walked on it). A graphic and a news voice-over explain the complex and delicate maneuver that the essential procedure required; an extended sequence of footage that merely shows one vehicle approaching the other suggests the difficulty level, and the grave danger, with a hauntingly abstract restraint.

In the best found-footage movies, the filmmakers build the process of finding into their very concepts. One recent example is Penny Lane’s “The Pain of Others,” from 2018, which is made entirely from YouTube clips of people suffering from Morgellons disease. The film both presents the footage in question and conveys a sense of the filmmaker discovering the story and doing the watching, transfixed and anguished, along with the viewer. By contrast, “Apollo 11” conveys wonder at the story of the space mission, not at the images themselves or, for that matter, at their specific depiction of the actions and events from which that story is crystallized. “Apollo 11” is, in effect, a film of its script, which the images merely illustrate. The mode and style of the film are taken for granted, borrowed from conventional and unexceptional documentaries, and the effect is to render something wondrous banal. With extraordinary material, a merely ordinary approach is worse than a bore; it’s a betrayal.