Home Culture Are You Sitting Down? | 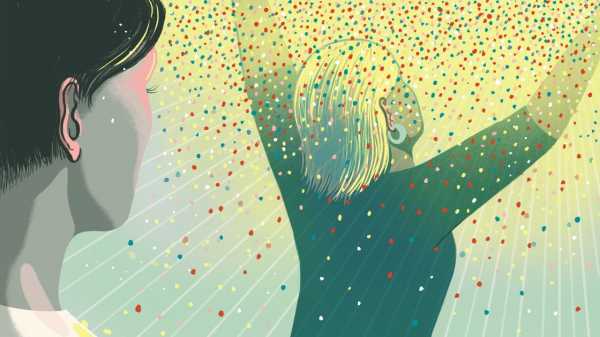 Before the phone call, it was an ordinary Sunday morning at our home in Los Angeles. I was sitting at the kitchen table with my youngest son, Felix, who had come shuffling out of bed at the crack of dawn. I poured a bowl of Honey Nut Cheerios and we made calls on speakerphone. We started with family on the East Coast, where the hour was less ungodly. I expected my sister Faith to be up with her daughter, but on this particular morning she wasn’t answering the phone. We tried Grandma next, in Chicago, but she was already out and about. So we were left calling Grandpa.

My dad also lived in Chicago, our home town, and was saddled with a pervasive melancholy not uncommon among Jewish men of his generation. The kind of guy who, if it started to lightly drizzle outside, would raise both arms to the sky like Tevye and cry out, “Why me?!” When Faith and I were kids, he was hiding out, depressed, or working. We spent most of our lives swerving out of his lane to let him pass. I remember his long working hours, getting home grumpy, the drawn curtains, the Don’t wake your father, the Oh, shit, I think you woke your father, rages followed by tearful apologies. One of my greatest inheritances felt like it could be that sadness that lived somewhere inside him, unexpressed and untended. After Faith and I left home, he and my mom got divorced. She let him go, and it was easy enough for us to let him go, too, because this is what we had always done.

Over the years, Dad and I had found our way into an easygoing détente of benign weather talk. It was in that spirit that Felix and I dialled. I put the phone on speaker, like I always do. Felix ate his cereal, and my dad, the six-foot-tall Jewish bear, said, “Hi, Jilly,” just like he always did. We talked for a few minutes, and then I asked how his weekend had gone. My dad said he had gone to a holiday party and I asked, “Whose party?” “Do you really want to know?” he said, and I said, “Of course.” “Jilly?” he said. “Are you sitting down?”

I realized that if I needed to be sitting down then I should probably turn off speakerphone so that Felix wouldn’t hear. Both of my parents could be counted on to casually blurt out a report of a gruesome death of someone on the news, a local kidnapping or Amber Alert, or the description of a bowel movement. I snatched the phone off the table and held it to my ear.

His voice was gentle. My chest went hollow.

I marshalled Felix to the TV room, put on “Dinosaur Train,” and raced back to the kitchen table. My dad started by telling me about a group called Chi Chapter that he’d been a part of for years, a support group that sometimes had conferences. I Googled it as we spoke, thinking that the Internet could help me understand. I encountered a Web site with strong Angelfire vibes, “Victor/Victoria” clip-art graphics, and descriptions of yearly daylong boat events called FantaSea. My dad told me about a Hyatt in the Chicago suburbs where the girls (What girls?) would get rooms, change into femme clothes, then head to the restaurant for Caesar salads and Chardonnay.

All of these people did this in secret, he said. Most were married and straight. He gabbed on excitedly while I dropped in and out, listening and Googling and spinning. There was a nice woman at Nordstrom, he said, who had been helping him pick outfits for years. (Nordstrom? Did I remember him going to Nordstrom?)

That morning, I thought my dad was telling me about his odd hobby, but now I know that he was introducing me to a woman who had been living in our house throughout my entire childhood. I had the wrong pronouns then and have only some of the right pronouns now, but I’ll use the wrong ones so you can see how wrong I had it.

Even though my brain was trying to jump out of my skull, I knew to listen and be present, to speak with reassuring words: “I hope you know that I love you forever, unconditionally.”

I took some deep breaths. “Do you have a new name?” I asked.

When the call ended, I ran upstairs. My husband, Bruce, was sound asleep. I ran at him, pushed him awake, then did an OH MY GOD dance.

“He’s trans,” I said. “Or, I guess more like cross-dressing, which is different than transsexual or transgender, I mean, he said he’s part of a group. . . .”

“Does your mom know?” Bruce asked.

Bruce finally got out of bed. He tried to collect me in his arms, but neither of us was sure if I needed comforting. What had just happened? I paced, trying to figure out what to do. Whom to call. Did Faith know by now? What about my mom? Everything would get more real once they knew.

“So I should just go downstairs and act normal?” This is what we do, right, get on with our Sunday? Is this what a parent is, one face for your kids, to hide your inside face from them?

I went downstairs to check on Felix. I texted my therapist: Can you talk later? When Bruce finally came downstairs, he was wearing a dress from my closet. He didn’t say anything, just acted all natural and talked about whether we were going to the farmers’ market. We cracked up.

One day, two months later, Faith sent me a text.

“Okay so I finally have a picture of her.”

I waited for the photo to come up on the phone. It was a picture of a lovely, mature woman who had my dad’s face. She was wearing a blond wig, chunky curator jewelry, a striped tunic-ish shirt. Carrie. There was a plate of food in front of her. It appeared that she’d had quite a delightful meal. Is that a chicken bone on the side of the plate? I kept enlarging the photo to really get a good look at her.

Who is this person? She looked related to us. Maybe like one of my aunts. Big, huge smile on her face. I’d never seen my parent smiling quite like that.

“Does she dress this way all the time now? Will it always be this wig? Is she dressing up or is this her?”

“She has a few different wigs. She’s just trying on different personalities. Like when you’re in high school. It’s normal when you first come out. That ebullience. It’s called the ‘pink fog.’ ”

I wondered what I was supposed to think about the old version of my dad that I remembered. The big one with the beard that wasn’t actually dead, but was—where, exactly? When I told my friend Nicole about my dad, she said, “Oh, she must be so relieved, to get that big old monkey suit off.” But where was that monkey suit that used to contain my dad? Was it on the floor somewhere, deflated? The notion got me thinking about my own lifetime of bodily disconnect.

Not long after, I got word that Carrie’s sister, my aunt Ruth, was nearing the end of her life. My mom had also scheduled hip-replacement surgery and needed us for support. I decided to go to Chicago to say goodbye to Ruth, be there as my mom went into surgery, and finally meet Carrie.

Ruth was in her eighties. When I got to her apartment, her hospice attendant opened the door. She was sweet, and the space felt warm and quiet. I went to sit at Ruth’s bedside. She took sips of water. I told her how much I loved her and how good she looked. Her son David, my cousin, would be there soon. But, before he arrived, she wanted something from me. Could I give her my thoughts on a letter she wanted to write to my dad?

“I don’t want him to come to my funeral in women’s clothing,” she said.

My cousin David arrived. She told him what she wanted to say in the letter and he agreed to write it down as she dictated. Once it was done, maybe I could give it to my dad? She, like my mom, saw my dad’s transness as an attention-getting, exhibitionistic ploy. Maybe she didn’t want to be upstaged on her big day by what she saw as a dress-up game, even though she wouldn’t be there to see it.

I wasn’t sure if I could give my dad the card. David said he would.

Then I went back to my hotel room. There was only one way to get through this, and that was to dive back into work. I pulled out my laptop and began working on the script that became my TV series “Transparent.” It came out so easily, like a slippery baby.

The next night, at my mom’s house, while she was resting in the hospital, Faith and I had dinner with Carrie for the first time. We agreed on picking up barbecue. Moments are always less heavy when people have charred meat in their teeth.

“She’s here,” Faith said, and went to answer the door. I tried to calm my breathing. I felt hot in the chest, totally fearful as I heard my dad at the door. Her voice had a lilt, but, then again, it had always had a lilt. Maybe we had always been hearing Carrie.

Faith was jovial, her phone camera held up, imitating a self-important fashion-show narrator, urging Carrie to twirl for us, calling her a supermodel. I felt paralyzed.

We got through dinner somehow. I told Carrie that I would drive her home, and we talked a little, but it was all too much, my throat closing against the thick smell of an unfamiliar perfume.

As soon as I dropped her off, I started to cry.

A few days later, Ruth passed away. Faith, Carrie, and I took a car to the funeral. David confessed to me that he’d never mailed the card. But Carrie seemed to know anyway. She wore a men’s suit, but her nails were pinkish beige and she wore women’s loafers and held a small purse. Not a soul noticed.

This text was drawn from “She Wants It: Desire, Power, and Toppling the Patriarchy,” by Jill Soloway, which is out in October from Crown Archetype.

Number of Confirmed Coronavirus Cases in Singapore Rises to 40 –...

How Larry Sultan Made His Father a Metaphor for Dashed American...