Home Culture Ariana Grande’s “thank u, next” Is the Breakup Song for the Social-Media... 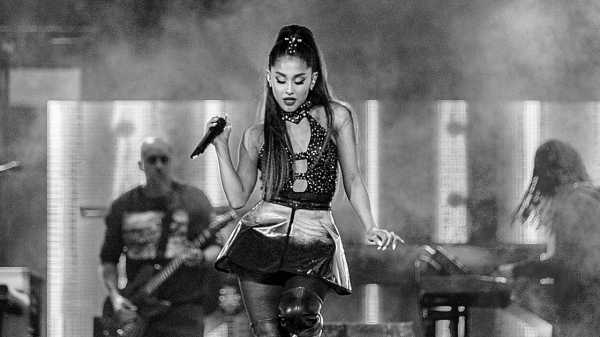 Just before midnight on Saturday, November 3rd, the pop auteur Ariana Grande unexpectedly released a new single, the twinkling “thank u, next.” Unannounced song drops are less surprising than inevitable in pop music these days, and not all of them stick the landing. Grande’s track found immediate resonance. Shortly after its release, scores of memes riffing on the pre-chorus—“one taught me love, one taught me patience, one taught me pain”—featuring, say, photos of the Jonas brothers or three different Shreks, cropped up on Twitter. The song even found its way to the experimental composer Ryuichi Sakamoto’s ears.

It’s telling that Grande released her breakup jam shortly before the airing of an episode of “Saturday Night Live”—the show in which her ex-fiancé, the comedian Pete Davidson, is a cast member. The minutiae of Grande and Davidson’s breathless courtship, from matching tattoos to upstate jaunts, has unfurled in the media since they started dating, back in May. The same can be said for their engagement, which they dissolved a month ago. Leading up to Saturday’s show, Davidson cracked wise on TV about fast proposals. Grande took a notably different approach: “Even almost got married / And for Pete I’m so thankful,” she sings in “thank u, next.”

In the song, Grande pages through her ex-boyfriends before expressing gratitude for them and what they taught her: “I’m so fuckin’ grateful for my ex,” she belts. Her breezy tone makes the inherent punch line that much sweeter: Grande is not losing any sleep over Sean or Ricky, and these past ruptures have now landed her a No. 1 track. (“God forbid something happens, least this song is a smash,” she notes, in a moment of pop premonition.) “I’ve learned from the pain,” she sings. “I turned out amazing.” After her split with Davidson and the death of another ex-boyfriend, the rapper Mac Miller, from an accidental overdose, in September, the lyric is a remarkable affirmation.

Grande was well into the publicity cycle for her latest release, “Sweetener,” when Miller died, and she took a brief recess from social media (and even bore the pain of having many fans blame her for Miller’s death). At twenty-five, Grande is of the generation that intuitively understands how digital platforms act as a vessel for closeness. Promotional content aside, her Instagram is flecked with photos of herself that often tap into fan conspiracies and inside jokes with a self-aware wink. One Instagram selfie, from October, has a crib in the background. “Once again, that is for my pig i still do not have a secret child,” she wrote in the caption.

Grande seems hyper-aware that, in the age of Facebook and Instagram, you can’t ever really break up with someone. Even after the words have been said and the relationship status has been quietly changed, the algorithms have an insidious way of allowing old flames and fallen friends to wriggle back into our feeds and our consciousnesses. Stumbling on your ex flirting with someone else via Instagram comments is just life now. With “thank u, next,” Grande suggests that, if this ache is going to be out there online anyway—especially for her, as one of the biggest pop stars in the world—why not lay it bare for people to see and hear and meme? “There are parts of my life that they would love to know about,” Grande told Myles Tanzer, in a recent Fader cover story, referring to her fans. “And hard times that I have been dealing with for the past year-and-a-half that they deserve to know. . . . I don’t want to hide any pain from them because I can relate to their pain. Why not be in it together?”

A breakup in 2018 can often be coded as a reshuffling of priorities, as someone is demoted from a central role into a supporting player. Over time, the person we used to wake up with fades into an avatar that we inexplicably continue following—a life that reconfigures us again and again every time the name comes up in our feed, until, one day, the person doesn’t have that sway on us anymore. With “thank u, next,” Grande has given listeners an anthem about moving forward when technology often makes it impossible to do so. “No drags…. no shade….. jus love, gratitude, acceptance, honesty, forgiveness … and growth,” she wrote on Twitter, after the song’s release. Offer up gratitude, then barrel on.

Netflix’s ‘Anne With an E’ is a PC Fail