Home Culture At the Border, the TV Networks Find Eloquence in Starkness, Speechlessness, and... 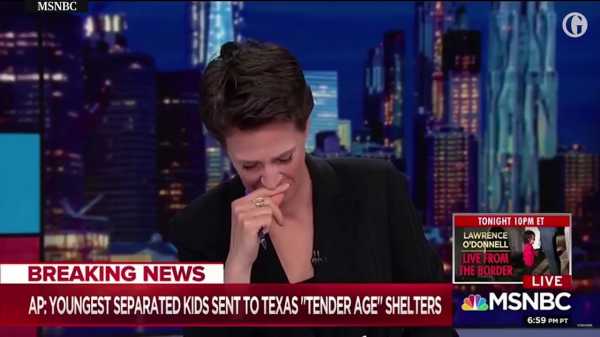 Last night’s edition of “The Rachel Maddow Show,” on MSNBC, collapsed under the weight of the news it was charged to deliver. At the very end of the hour, a story broke from the Associated Press about the “tender age” shelters that are housing panicked young children who have been separated from their families at the border. “Trump administration officials have been sending babies and other young children,” it read. But Maddow couldn’t read it. She pressed through the first sentence with her eyes locked on the page. At “young children,” she choked up and struggled into a prepositional phrase—“to at least three . . . ”—that she could not complete. She asked the control room whether there was a graphic rendering of the report to fill the screen, and spare the camera her crumpled face. There was not. She tried again: officials have been sending infants and toddlers “to at least three tender-age shelters in South Texas. Lawyers and medical providers—.” She could not complete the sentence, in which lawyers and medical providers described “play rooms of crying preschool-age children in crisis,” because she was overwhelmed with personal anguish and national shame. She handed off to Lawrence O’Donnell, live in Brownsville, Texas.

Later, Maddow offered an apology on Twitter, writing, “If nothing else, it is my job to actually be able to speak while I’m on TV.” But the rupture was an honest response to an abomination. The moment of speechlessness was a fair reaction to unspeakable events, and the peculiarity of it indicated the difficulty of the terrain. There is an established televisual rhetoric for reporting on natural disasters, but people are less practiced at covering domestic moral emergencies.

Television journalists began arriving at the border late last week, when the existence of detention camps for children was still a fresh horror. This week, they were joined by more reporters and anchors, and the messiness of the on-air talent—the broken composure, the emotional exhaustion, the eyes blinking back tears and fatigue—told a portion of the story. About twenty minutes after Maddow’s retreat, her colleague Stephanie Ruhle, on the air from Texas, was also visibly shaken and viscerally horrified by the phrase tender-age shelters. She seemed to steady herself by channelling her disgust into a direct appeal to Ivanka Trump, that professed champion of motherhood. “This is a moment,” Ruhle said, that “we must stand together as a nation, as parents, as humans with souls.” Emphasis in the original.

On Monday morning, CBS’s Gayle King appeared outside a border-patrol facility in Texas. As a morning-show anchor, she has been the most conspicuous of the presences stationed across the street from such portentously bland buildings, with the traffic passing by as the world keeps turning. This week, while other network-news programs have been framing the immigration story, broadly, as a “crisis at the border,” “CBS This Morning” has foregrounded the motives of Central Americans who journey toward the U.S. in search of asylum. A typical chyron read “Risking it all,” and it accompanied a segment that took a thoughtful pause to consider, with some immediacy, the horrors these families are fleeing. Turning an abstract abomination into a concrete horror by interviewing asylum seekers, King and her producers at once personalized the crisis and placed it in a global context. They illuminated the stakes with an influential clarity that set an agenda.

When ABC aired the infamous recording, leaked to ProPublica, of children sobbing for their missing parents, it juxtaposed the audio against government-issued images of children in cages—images digitally augmented to look, impossibly, even more sinister—and arranged for the translated transcription to materialize on screen, word by word, as if to gin up suspense. The over-all effect was unpalatably cinematic. By contrast, both CNN and MSNBC illustrated their audio by flashing transcriptions of full lines of text against a black background. The funereal starkness of this presentation is not a natural TV attitude. Nor was Maddow’s inarticulacy, which proved more eloquent than a straight recitation of the facts that she couldn’t bear to face. Fighting its instincts at an awful historical moment, television is finding strange ways to present essential truths.

Virtual doctor visits on the rise amid flu epidemic

Indian Authorities Approve Death Penalty for Rape of Children Below 12...