Home Culture “Bathtubs Over Broadway,” Reviewed: Can a Musical Sponsored by a Toilet Manufacturer... 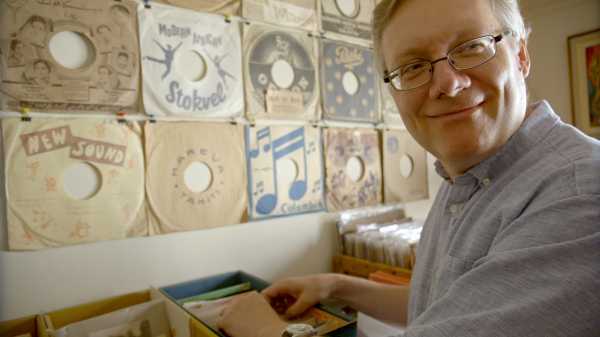 From the title alone, it’s obvious that “Bathtubs Over Broadway,” a new documentary by Dava Whisenant that opens this Friday, will be a delight. Its subject is the industrial musical—plays produced by corporations for their employees to enjoy at nationwide or regional sales meetings and conventions. Steve Young, who was, for more than twenty years, a writer for David Letterman, became obsessed, in the mid-nineties, with these shows—in particular, with LPs of them, which were pressed solely to be distributed to employees as souvenirs. The ostensible subject of “Bathtubs Over Broadway” is the amusement value of these exotic, eccentric by-products of show business, whose kitschy pleasures include celebrations of automobiles, dog food, and disposable blood-absorbing liners for the operating room, in a number that rhymes “hysterectomy” and “appendectomy.” But the overarching and underlying question that the film poses is nothing less than: What is art? And, for that matter, is the conventional definition of good art too narrow to account for the merits of such works as these?

Young admits that he was initially attracted to these records because he found them “unintentionally hilarious.” (This is the quality that led him to work the musicals into bits on the Letterman Show, for the recurring segment “Dave’s Record Collection.”) But, as he devoted himself to collecting the albums more intensively and combed archives and personal collections for memorabilia, whether sheet music or handbills, photographs or reels of film, Young discovered that, alongside the intrinsic element of absurdity and incongruity, there’s often a sincere and authentic spark of creative imagination and ingenuity.

He noted that some of these shows employed major artists (or ones who’d later become famous), both behind the scenes and onstage, including the composers Sheldon Harnick (better known for “Fiddler on the Roof”) and the team of John Kander and Fred Ebb (“Cabaret”); such actors as Chita Rivera, Florence Henderson, Bob Newhart, and Martin Short; and directors including Bob Fosse and Susan Stroman. Young also became fascinated by other performers and composers whose prominence in industrial musicals wasn’t matched by success in public theatre, and he sought to learn more about their art and their lives.

New Yorker writers reflect on their favorite works of art.

“Bathtubs Over Broadway” chronicles Young’s own story, as a writer early in his career who had no hobbies and instead found an obsession—and whose increasing involvement with industrial musicals coincided with David Letterman’s retirement and Young’s own withdrawal from comedy writing. (Fascinatingly, Young describes himself as “comedy-damaged,” explaining that decades of immersion in comedy have left him evaluating the craft rather than responding to it, and his sideline in industrial musicals appears to restore him to a state of unjaded passion.) Yet the central enticement of the documentary comes from the records and films of the musicals themselves. “Bathtubs Over Broadway” springs to life above all when Young puts an LP on his turntable, when he’s in a Library of Congress viewing room and sees a private 16-mm. copy of a production, or when digitized copies of soundtracks and films are excerpted directly into the film. The movie includes clips from the disco-style Johnson & Johnson “sunscreen musical of 1978,” a musical number called “Xerox Spoken Here,” the sheet music for an instrumental number called “Seagram’s Symphony,” and a scene of a kick-line chorus singing a financial ditty about “the extra margins that accrue.”

These clips reveal that many of these industrial musicals offer more than mere curiosities; they’re beautiful. Whisenant’s film catches Young two decades deep into his obsession, which, thanks to the Internet, became a far less lonely one. It enabled him to connect with other collectors, to acquire more recordings, and, above all, to find composers and performers who specialize in industrial musicals—artists whose names would have been otherwise lost to history because their work was explicitly intended not to be seen or heard by the public. Sid Siegel wrote music and lyrics for two hundred and fifty such shows. Michael Brown, who wrote music and lyrics, directed productions, and starred in them as well (in a clip of one show that he did for J. C. Penney, Brown plays the role of the historical Penney himself, an early-twentieth-century small-town shopkeeper with big problems and big plans). The prolific industrial-musical songwriter Hank Beebe delights Young with an on-camera rendition of a twisty and bouncy automotive tune called “Diesel Dazzle.” By presenting the gleeful idiosyncrasy of these artists’ flamboyantly poetic renderings of arch-prosaic subjects, Young and Whisenant confront colossal matters of aesthetic theory with a sly wink.

In terms of theatrical craft, industrial musicals rivalled Broadway both because their artists were themselves Broadway artists and because the companies that sponsored them invested Broadway-type resources into their production. One composer explains that the show that he wrote for Chevrolet in 1956 had a three-million-dollar budget, whereas the Broadway première of “My Fair Lady” the same year was staged for $446,000. (That’s one reason why performers sought work in these shows: Stroman says that an actor could make a year’s living doing four industrial shows.)

The musical that provides the movie with its title was sponsored in the late nineteen-sixties by the American Standard company, which manufactures bathroom fixtures. “The Bathrooms Are Coming,” written by Siegel, featured a song about revolution—“bathroom revolution”—and a lyrical ballad for an actress, titled “My Bathroom” (a woman’s bathroom is “a private kind of place” in which, the character sings, she can “cream and dream”). Young found the actress who performed that scene, Patt Stanton Gjonola—who made her career in industrial musicals—and she, in turn, found her copy of a 16-mm. film of the production. A clip shown in the documentary reveals an intimately imaginative production number, realized by means of special effects, in which Gjonola does a duet with herself. It’s a moment of great theatre that’s heightened to a moment of great cinema (the documentary offers no clue to the identity of the “Bathroom” director). “With melodies so catchy, if they were about something else than bathrooms, would they be standards now?” Young wonders.

Along with the stoking of company pride, the musicals appear to have fulfilled another, extraordinary function beyond that of the sponsoring companies’ dreams. According to several of the actors and writers of these shows, the audiences of salespeople, managers, dealers, and suppliers was authentically enthusiastic. As Young says about these mid-level businesspeople, “Suddenly they were being shown a version of their world in which they’re heroes, and it’s glamorous.” Where the commercial theatre offered the public “Death of a Salesman,” industrial musicals depicted the life of salesmen, albeit in optimistic terms—which nonetheless were carefully calculated to correspond with salesmen’s own dreams, desires, and ideals.

Young’s extraordinary insight points to a glaring absence in Hollywood movies and popular shows: the lack of connection with the experiences of daily life, the failure of many playwrights and filmmakers to depict the lives of ordinary people—both people at work and consumers—with a sufficiently detailed confrontation with the pleasures and problems of workaday details and with a sufficiently far-ranging realm of imagination and fantasy. The tone of these shows may be hectoringly cheerful and goal-oriented, but—at least judging from the brief samples included in the movie—they suggest close ties to material life and its inextricable element of inner identity that most movies and plays can only envy.

These industrial musicals are linked, in this regard, to TV commercials, where the so-called Golden Age of freewheeling creativity, the nineteen-sixties, also overlapped with the prime era of industrial musicals. Many great filmmakers have made commercials; few got their start in commercials (Michael Cimino is one who did, in the sixties). Their brevity limits the scope of individual artistry no less than their mercantile messages and assumptions do. The length and span of these musicals, by contrast, places them on more equal footing with publicly performed plays—which is why it’s all the more urgent, for determining their merit, for the productions briefly excerpted in “Bathtubs” to be digitized and reissued in full.

Many classic works of art are, in effect, commercials, from Pindar’s epinician, or victory, odes to Bach’s church cantatas. For that matter, plays and movies aren’t immune from propagandistic values, whether imposed on the artists or shared by them. It’s a mark of mediocrity, on the part of an artist or, for that matter, of a critic, to judge works by their ostensible subjects rather than by their approach to them. (This is an especially welcome reminder in the heat of Oscar season, as matters of civic importance, often dramatized with numbing banality, dominate attention.) At the same time, the critical-rediscovery industry, the recognition that much work formerly derided as disposable is worth considering as art, has a crucial downside: mistaking mere recognizability for merit. Whether some, or any, industrial musicals are worthy of a place in the theatrical pantheon remains to be determined. But this very question reflects Young’s passionate critical legwork and discernment, along with that of other similarly devoted collectors, and their jubilant preservation in Whisenant’s film.

The Senate’s immigration debate, starting next week, is really at least...

“Honey,” Reviewed: Robyn Has Returned, and She Has What You Want...