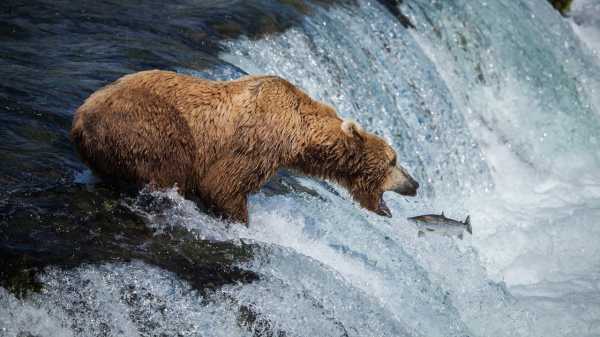 One recent afternoon, I found myself spellbound by the brown bears of Alaska’s Katmai National Park, and spent longer than I care to admit watching them fishing and feasting on the sockeye salmon of Brooks Falls. Several bears stood in the water, facing the falls. They didn’t interact with each other much—at least not in a way that was legible to me—but quietly went about the business of fattening up for winter. I watched these Internet stars through a live stream popularly known as the bear cam, which provides a counterpoint to the hyper-produced prestige nature documentaries that use music, high-definition videography, and delicately placed cameras to turn wildlife activities into dramatic cinema. If “Planet Earth” is a Michael Bay production, the bear cam is not even a home movie—it’s CCTV.

The bear cam, which has been hosted by Explore.org since 2012, draws thousands of viewers each day during the high season, in the months of July and September, when Brooks River is especially flush. (August could be considered the shoulder season, when the salmon are further upstream and Brooks Falls hosts a trickle of bears rather than a throng.) In Washington, D.C., in June, a luncheon for Republican lawmakers hosted by Senator Dan Sullivan, of Alaska, featured two big screens playing the feed from Katmai. Senator Lisa Murkowski told Alaska Public Media that the bears stole the show, with legislators turning away from other conversations to cheer on the fishing bears with cries of, “There! He got it! He got it!” When the salmon run is in full swing, you might see a catch every few minutes—but fishing’s a game of chance and skill, and sometimes the action is slow.

The bears are active during daylight hours. Being on East Coast time, and four hours ahead of the bears, I sometimes check in in the morning and find the falls almost empty, with the earliest arrivals just settling into their fishing spots. At peak hours, as many as twenty-five bears have been seen on the livecam at once. But, even when there aren’t many bears, the cam is still a place of zen, with plenty of swooping gulls, salmon launching their bodies out of the water to make it over the falls, and the white-noise rush of the river itself.

But the best viewing, of course, is when there are plenty of bears. On a recent afternoon, there were around ten bears on the cam, using a variety of techniques to stalk the salmon. Some stood downstream of the falls, upright and staring straight down into the water for fish to grab, almost as a person might do. The most dramatic were those that perched on the rocks at the top of the cascade, grabbing at the airborne salmon attempting to leap over and continue upstream. It’s innately satisfying to see a bear grab hold of a salmon with its mouth and trundle off into the shallows with the fish still flapping in its jaws.

It takes serious expertise to identify individual bears, but you can start to notice obvious differences right away: their coats run from blond to dark, mottled brown; some are fluffy, some shaggy; some are fat and slow, others so lanky they look like giant, furry hounds. “Watching the bears at Brooks River was really an eye-opener to me,” Mike Fitz, a former park ranger at Katmai who now serves as the Explore.org bear-cam fellow, told me. “It really allowed me to understand that wild animals are individuals. It’s very easy to see that on the Web cam—not only in appearance but also in behavior.”

The fishing strategy I most admired was that of a big bear that sat almost fully submerged at the base of the falls, with just his head and neck sticking out, staring with great focus into the foamy water right in front of him, and, from time to time, sticking his face into the churning river and snortling around, often to emerge with a mouth full of fish.

This bear was likely No. 480, a large adult male who regularly claims the plunge pool at the base of the falls, a fishing spot known to bear-cam enthusiasts as “the jacuzzi,” Fitz told me. “He’s a very skilled fisher, and he doesn’t really expend a lot of energy. He makes a living sitting, waiting for the fish to come to him,” Fitz said. Brown bears are asocial—they don’t live in packs—but they converge when there’s a concentrated food source, and, when they do, there’s definitely a hierarchy, with the most dominant bears laying claim to the most productive spots such as the jacuzzi, where fishing is easy. The spots at the top of the falls are also in high demand. Large adult males dominate the pecking order, Fitz told me, followed by females with cubs, leaving younger males to scrabble around, often trying out the more desirable fishing spots during off-hours, when the larger bears are not around. From time to time, rangers and dedicated cam watchers will notice an especially promising bear come onto the scene. This season, the one to watch is No. 503, a young male that, according to Fitz, “is showing potential to be a master angler.” He’s been trying out all of the different fishing spots and methods. His success is owed to a combination of “his individual disposition, being willing to go to all those different spots when the opportunity is open, and also his ability to learn,” Fitz said.

From time to time, the camera moves—following a particular bear or zooming in on a bear that is doing something especially interesting. The camera can be set to shift views automatically, but, for the most part, it is being run by bear enthusiasts from around the country, who can get credentialled to log in and operate the camera remotely. Apart from that, the feed is unedited. And so even watching on a computer screen has the serendipitous feeling of catching a glimpse of wildlife out the window, rather than the on-demand control of queueing up the next episode of guaranteed glamorous sightings. (One day, I opened the cam and saw blond cubs napping and nuzzling in the sun on the riverbank—the delight took on a duller cast as soon as I realized I’d navigated to ae “Highlights” feeds and was not the live footage.)

For a casual viewer, the bear cam is enjoyable as a kind of generic nature film: pretty scenery dotted with busy apex predators, enough action to keep you entertained. But committed viewers share screenshots, photos, and commentary in a thread below the live stream, debating identities (and taking in details even down to the color of different bears’ claws), and speculating about possible mating matches. When a favorite female was spotted with a male known as Walker—No. 151, a lanky adult male with a dark-chocolate coat—who is known to be “particularly playful,” one commenter noted, “Well he’s too old for her, lol but I would suspect that he’s quite the charmer and a gentleman.”

The sharing of photos and sightings has allowed rangers to piece together the stories of these bears in remarkable detail. Fitz told me about a yearling bear that had been seen elsewhere in the park and that “got emancipated at a weird time of the year, and at a weird age, not typically during a season or an age when bears are separated from their mothers.” The ranger assumed the cub would be on his own and that he would “have a rough go of things.” Instead, bear-cam viewers saw that a female, Holly, No. 435, who is well known to Brooks Falls fans, had taken the abandoned yearling in. “When she came back to Brooks River, we could see it was a full adoption,” Fitz said. Holly was offering the stranded youngster protection, nursing him alongside her own cub. That little urchin has grown up to be none other than No. 503, this year’s promising angler. From an unmanned camera on a riverbank in Alaska, a Hollywood ending.

Broadband Internet Services Set to Return in Indian Side of Kashmir:...

US Allegedly Has Financial Data to Support Russia Bounty Claims –...