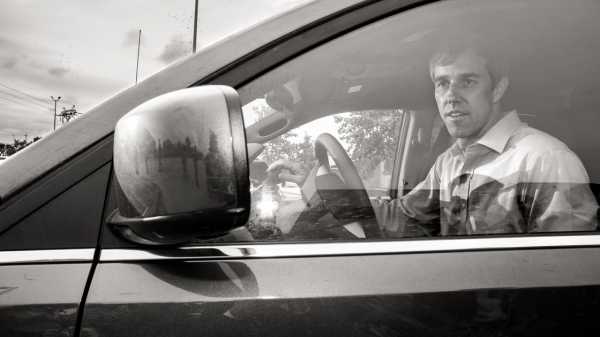 In the days since his loss to Ted Cruz in the Texas Senate race, Beto O’Rourke has not fallen into a twilit, Nordic funk, except in one respect. Here is how he begins a blog post he published on Medium on Thursday. “I woke up after a good night’s sleep. Snow coming down in gentle big flakes. Salud was taking a shower, so I went downstairs to use the basement bathroom. Came back up and put my tights, shorts, long socks, tshirt and overshirt on. Hat and gloves, my running shoes and was outside by 7:45.”

That languid parsing of routine activity, in which no detail proves too insignificant, conjures another lanky father with salt-and-pepper hair. Another dweller of wintry climes. The passage is positively Knausgaardian. (But which bathroom did you use, and why, Beto? Were you at least wearing your long socks?) Unlike a lot of authors, O’Rourke may have the luxury of knowing that his supporters and fans care about his life. There is a confidence to his disclosures: he’s giving the people what they want. In a thank-you note to his devotees that he tweeted last week, the congressman offered a similar lulling density of minutiae. “Amy is watching Last of the Mohicans in the other room with the kids,” he wrote. “We started it last night after Ulysses’s basketball game. Pizza, carrots, Mohicans and then early to bed.”

But O’Rourke is not just channelling Karl Ove Knausgaard, the famous Norwegian writer. He is playing a relatable, nice, normal version of Knausgaard. The narrator of the Medium essay displays a knack for quotidian particulars and mood-setting, but he also seems free of misanthropic grumpiness—he shakes people’s hands and expresses gratitude for “the mystery of being alive.” He is the offspring of two thought experiments: “What if writers of autofiction were not mostly terrible?” and “What if the perfect human-facsimiles that populate Instagram could exist in real life?”

In his blog post, O’Rourke is charmingly, daddishly open to the other runners on the path, one of whom he high-fives at the top of the Lincoln Memorial steps. When his knee stops hurting after he reads the engraving of the Second Inaugural Address, he turns the experience into a metaphor about goodness and healing. “I wondered if the winds had changed too,” he writes, like a starry-eyed Carrie Bradshaw in Asics.

O’Rourke’s granular style is not, at least to this reader, an entitled claim on our himpathy. It feels born of a sweetly documentarian impulse, a sense that the world is fertile with incident. “Cold but not too cold,” O’Rourke specifies, about the weather. It’s riveting. A political candidate affirming his humanity through anecdote is nothing new, but a political candidate affirming his humanity through the total absence of anecdote is wonderful, like a koan spelled out in the toothpaste left in the sink.

O’Rourke’s persona spills over onto other platforms. His Instagram stories suggest a Karl Ove who has traded in low-key domestic malaise for social-media influencing. (Perhaps the only politico better in the genre is Alexandria Ocasio-Cortez, the leftie dreamboat who occasioned a Twitter uprising this week after a reactionary goof mocked her clothes and body.) In a representative post, the congressman slices a flank steak he has marinated with lime, soy sauce, and garlic. (“Tag yourself, I’m the steak,” a follower tweeted.) He munches chips and homemade guacamole while driving. (“It was just the biggest mood,” a follower tweeted.) He cooks up a bowl of slime with his daughter, throwing the camera a look of inadvertently sultry seriousness. (“my HEART,” a follower tweeted.) We knew that the Knausgaardian mode of autofiction possessed a weird magnetism, but maybe it took a confessional Texas politician blowing off steam online for us to see just how much. One almost wishes that certain surly Scandinavians would join Instagram and unveil a series of grayscale compositions, reminiscent of slow TV, depicting various plushly melancholy accents. Cornflakes eddying in a bowl. Cigarette smoke wisping out the window. Otherwise, Knausgaard will let hotshot O’Rourke win the runoff election in our hearts.