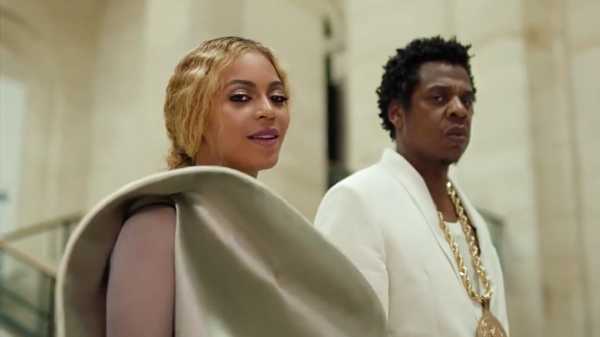 Not even the most ambitious record executive could have dreamed up a pair like Jay-Z and Beyoncé. The couple has secured two of the most storied legacies in modern pop history; independently and as a unit, they have conquered the realms of music, business, celebrity, and live performance. Now, on “Everything Is Love,” the joint album they released, without warning, on Saturday, they wish to note that they have conquered the realm of family as well. “I can’t believe we made it,” Beyoncé rejoices on “Apeshit,” the record’s trap-lite centerpiece. She sounds light, unburdened, as if gazing back at the turbulence that she examined on her previous album, “Lemonade,” from 2016, and breathing a deep sigh of relief.

Jay-Z, in a recent interview with the New York Times magazine T, said that listening to “Lemonade” had made him “very, very uncomfortable,” and that the couple used their art “like a therapy session.” None of that discomfort is palpable on “Everything Is Love,” a breeze of a record that slams shut the book on their marital demons. There are a few references to Jay-Z’s infidelity, but they are cheekily dismissed: “Yeah, you fucked up the first stone / We had to get remarried,” Beyoncé sings on the album’s closer, “LOVEHAPPY.” Jay-Z laughs and says, “Yo, chill!” Beyoncé tore open these issues in grandiose, sometimes gothic fashion on “Lemonade,” and Jay-Z addressed them in his unusually introspective album “4:44” last year. Those were serious, heavy records. “Everything Is Love” is a pointed reversal of that tone; there is no torment, only celebration. You imagine that in five years, when Beyoncé embarks on another arena tour, these songs will be sprinkled in as light, casual refrains.

A collaborative album seems like an obvious move for the couple, but there was plenty of risk involved. Despite their talents, the pair have tended to struggle when working together. Jay-Z provided Beyoncé with turbo fuel for her masterwork, “Lemonade,” but he has more often been a feeble counterpart—a creative inequity exposed on several collaborations, including “Drunk in Love,” the hit single from Beyoncé’s self-titled album, from 2013. (That song was a success despite Jay-Z’s clumsy verse, not because of it.) Meanwhile, when Beyoncé has appeared on Jay-Z’s tracks, she has done so almost as a spectre, careful not to overpower him. Their two collaborations with DJ Khaled, “Shining” and “Top Off,” have been throwaways and commercial flops.

But on “Everything Is Love” the pair finds new, effective ways to reconcile their strengths and weaknesses. Jay-Z, seemingly galvanized by Beyoncé’s talent, raps with an urgency he’s rarely shown in the last decade (with the exception of “4:44” and “Watch the Throne,” his 2011 collaboration with Kanye West.) Most of these nine tracks feel like radio-friendly Beyoncé songs, with Jay-Z brought in to provide weighty ornamentation, but he lends the work a sense of vengeance and pride, rapping forcefully about race and baring his teeth at anyone who dares to still question his bona fides: “I’m good on any M.L.K. Boulevard,” he raps on “Black Effect.” “See my vision with a Tec, bitch, I’m Malcolm X.”

Though Jay-Z raps like a man left with something to prove, the album sees Beyoncé temper her usual perfectionist sensibilities with an air of whimsy. She has dabbled with rapping in recent years, but it’s her primary mode here—she approaches it coolly and casually, like an élite athlete trying a new sport. In the last decade, Beyoncé has moved gently away from her more chaste and polite pop origins, and rapping allows her to be at her most carefree and explicit. “I be balling on these bum whores,” she says on “Boss,” over a lush backdrop of horns and harmonizing. That song, an era-agnostic soul track, is a swaggering proclamation of cultural dominance: “Ain’t nothin’ to it,” Beyonce raps during the chorus. “Boss.” This is a theatrical wink from Beyoncé, whose career has succeeded largely because she shows us exactly how much there is to it: how much blood, sweat, and tears go into staying at the top. If there is anything she has yet to conquer, it is effortlessness.

At this phase of their careers, Jay and Beyoncé have the great privilege of ignoring commercial pressure. “Lemonade” subverted the very idea of what an album could be, débuting as a film on HBO. It showed little reverence for radio formats, aspiring to high art instead. Nor did Jay-Z have his ear to the radio on “4:44,” a quiet throwback album that asserted his role as elder statesman. “Everything Is Love,” on the other hand, is some of the most commercial work they’ve done in years. Pharrell’s fingerprints are all over the album, which takes ambiguously retro shades of neo-soul, funk, and synth pop and fuses them with a modern, Southern-rap sensibility. There’s plenty of fodder for Instagram captions too: “My friends are goals / Your friends are foes,” Beyoncé says on the song “Friends.” She and Jay-Z revel in their material wealth, name-dropping luxury brands and exulting in the comfort of their thrones. (“My crib look like the Soho House,” Jay raps.) But the record’s simplicity doesn’t feel cheap. Contentment, it argues, doesn’t have to be complacence. Beyoncé and Jay-Z have earned hundreds of millions of dollars, countless accolades, and the status of cultural icons. This album is their way of announcing that they’ve also earned the right to be happy.

My First: Liverpool manager Jurgen Klopp reflects on a selection of...