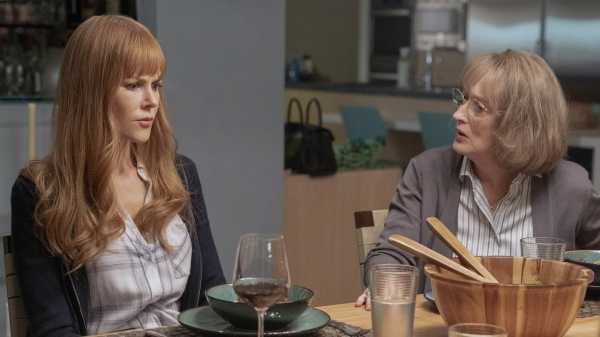 On June 22, 1949, Mary Wilkinson and Harry William Streep, of New Jersey, welcomed a baby girl, whom they named Mary Louise. But, as the child’s personality emerged, Harry decided that the nickname Meryl better flattered her, and Meryl is the name that stuck. Seven decades later, the same Meryl Streep has reassumed her legal name in the role of Mary Louise Wright, the grief-addled mother who comes to Monterey, California, in the second season of the glossy HBO drama “Big Little Lies.” She is there following the death of her son, Perry Wright (Alexander Skarsgård), the abusive husband of Celeste (Nicole Kidman), at the Otter Bay Elementary spring gala. The demise of Perry hasn’t freed Celeste; she and Madeline (Reese Witherspoon), Bonnie (Zoë Kravitz), Renata (Laura Dern), and Jane (Shailene Woodley)—the Monterey Five, as the gossips in town call them—are now bonded in an awful and obsessive grief, and Mary Louise’s arrival curdles whatever shaky peace they’ve achieved. Streep sharing a name with her character is a fourth-wall-breaking genuflection to her demigoddess presence, which might alone persuade us that it was appropriate to revive this story.

Streep reportedly so adored “Big Little Lies” that she signed onto the second season of the show without so much as glimpsing a script. But the eruption of hosannas in response to her casting did not completely silence a note of nagging concern. Why mess with such a delicious thing? When the show premièred, in 2017, “Big Little Lies,” adapted from Liane Moriarty’s novel set in Australia, was presented as a miniseries, not a serialized drama. The depiction of upper-middle-class malaise and sororal suffering earned eight Emmys and four Golden Globes, and status as one of the last monocultural phenomena in an increasingly fragmented, niche entertainment landscape. I am not ill-mannered enough to complain about the heavyweight reunion of Kidman, Witherspoon, Dern, Kravitz, and Woodley. If anything, I’m simply weary. No one in the movies or on TV knows when to end their projects anymore. “Big Little Lies” ’s graceful economy and narrative containment had seemed like such a wise decision. Beginning Season 2, I was worried that I’d have to see my beloved, bitchy, balletic “Big Little Lies” become lurching or distended. I hated to think that, once again, greed—of both the financial and the postmodern fan-service sort—had overridden a rare exercise of artistic restraint.

Integral to the anatomy of some ballets and operas is the coda: a last gathering and recapitulation of themes, a pulling of the viewer back into her chair to hear an echo of the story’s conclusion. The beginning of “Big Little Lies” Season 2 (I’ve seen three episodes so far) seems to me that way, as an extended finale of the first season, though drawing on a differently calibrated momentum. In Season 1, a Greek chorus of nosy parents and snide school administrators guided our attentions. In this installment, we tread in the artfully stilled waters of psychological aftermath. Summer is over, when the show opens, and the parents swarm Otter Bay for the first day of second grade. The parents are exhorted to sing a cloying song, but Bonnie, broken by her involvement in Perry’s death, sits stone-faced. Everyone except for Bonnie—who was the one to push Perry to his death—has experienced the action as a communal defense, a unanimous exhale. And yet each of them is still suffocating. The police cannot disprove that Perry succumbed by someone’s hand. In the detectives’ glitching interview tapes, which are spliced in to disturb the opening scenes at school, the women, their faces stained with mascara, insist that he slipped and fell. Immediately, this season’s director, Andrea Arnold, who takes the baton from Jean-Marc Vallée (who stayed on as executive producer), submerges us in an atmosphere of guilt, enhanced by a plague of involuntary flashbacks. At Otter Bay today, the colors are vividly sun-bleached; in dreamy flashback sequences, the palette is ink-gray, and dazed women walk barefoot to a turbulent ocean.

The truth about Celeste’s marriage is out to the group. We also now know that it was Perry who raped Jane years ago, and that he is the father of her son, Ziggy. But the women are still caught in so many lies: to their husbands, their children, and themselves. Free-floating despair conforms to each woman’s temper and the beats of her everyday routine. As Madeline, Witherspoon sprints from a coffee shop to a real-estate open house, selling handsome white couples the dream of professional and romantic achievement that is slipping underneath her own feet like sand. Renata pumps a low-pound exercise weight as she poses for the cover of a magazine’s “Women in Power” issue; later, a selfish choice made by her husband, Gordon, proves that she doesn’t warrant the title. “We’re creatures of want,” he tells her, accusingly. Bonnie drifts, mentally and literally; she goes for runs constantly, in these episodes, while her husband struggles to match her pace. Her mother has arrived in Monterey, too. We still don’t know enough about the trauma Bonnie apparently experienced as a child, and whether that trauma matches what happens in Moriarty’s book, and I’m not sure how I feel about the dragging out of the backstory of the show’s only black star. Hippieish Jane, who doesn’t have wealth as an additional burden, seems the most well adjusted. She flirts with a wily-haired co-worker at her job at the aquarium, a philosophical surfer, asking him if he might be on the spectrum.

“Big Little Lies” is a fairly apportioned ensemble vehicle, giving each actor room to shriek, to cackle, to clutch a glass of wine nervously as she stares at the surf. I especially like the space given to the child actors, who, this season, are reproachful and inquisitive. But no character propels scenes quite like Kidman’s Celeste. This season she is haunted. Her eyes are an electrified, inhuman blue. She takes sleeping pills and wakes up behind the wheel of her car. She struggles to discipline her twin boys, who are growing, frighteningly, more and more like the father they grieve each day. Kidman’s nonjudgmental inhabiting of Celeste’s oscillations continues to be exceptional. Sometimes, Celeste sees herself as a victim, sometimes as a co-conspirator, sometimes as the true monster. Her memories of Perry’s beatings blur with memories of their rough sex, mingling in her mind now as they once did in life. Perry controls her, and has warped her definitions of consent, even from beyond the grave. “As dead as he is, sometimes I think maybe I’m deader,” she tells Madeline. Her therapist (Robin Weigert) compares her to a soldier suffering from P.T.S.D., acculturated to brutality. “You miss the war,” she says flatly.

This capsule summary might lead you to believe that the tone of this season is ponderous, or, worse, pandering and dutiful on the subject of women’s trauma. But “Big Little Lies” resists ideals of “responsible media” in the age of #MeToo. The second season is a little rude, and a little raw, and openly indebted to Andy Cohen and his army of Real Housewives. On one level, “Big Little Lies” is like that reality franchise, a social satire driven by a humiliating exposure of the divas of the nouveau riche. “I don’t fucking care about homeless people!” Madeline shouts at her daughter Abigail, who has decided she will skip college in order to work at a socially conscious startup. “I will not not be rich!” Renata wails, as she slams a glass jail divider. There is a boisterous story line about Otter Bay’s bratty parents being inconvenienced by the second-grade climate-change curriculum. The stooge humor of rich women behaving selfishly pleasurably reflects certain recent stories in the news, including the élite-college-admissions scandal. A show that asks us to watch mothers explain to their sons what assault is, and what it has to do with their fathers, demands some freebie levity, and “Big Little Lies” delivers. Our laughter is a relief.

Stalking through all of this is Mary Louise, an unnecessary character elevated to an indispensable one because, simply, she is played by Meryl Streep. Ostensibly, Streep has come to Monterey to help her daughter-in-law take care of the children. Really, she is suspicious, and intent on solving the lingering “mystery” of Perry’s death. She wears a prosthetic overbite and a portentous crucifix necklace, long coats and cardigans swishing behind her like a modern Miss Marple. The character introduces a sociological tension to the show, bringing a fresh conservatism to the sometimes rote liberal politics of “Big Little Lies.” Mary Louise believes her son to have been cherubic. When Celeste and Jane beg to differ, she accuses them of misinterpreting his actions. She is the older woman who thinks that some men may be rapists, but also that some women are temptresses. There are scenes between Mary Louise and the younger women that play like dramatizations of the generational debates that have been taking place in living rooms, op-ed pages, and on Twitter in recent years. But “Big Little Lies” is too smart to use Streep simply as a proxy for plot development and feminist infighting. Socially awkward and wholly unhinged, Mary Louise pops up behind building walls to gaze lovingly at Ziggy, the grandson she has never known, and picks fights with her natural nemesis, Madeline, who reminds her of a girl who bullied her in school. Streep gives Mary Louise a vicious and eerily hilarious maternal edge. She is clearly having a ball. I can’t wait to see how her story line expands.

Gold Slides From Near 7-Year Highs as Trump Appears to Avoid...