Home Culture “Big Little Lies” Season 2 Was a Metaphor for Power in Hollywood... 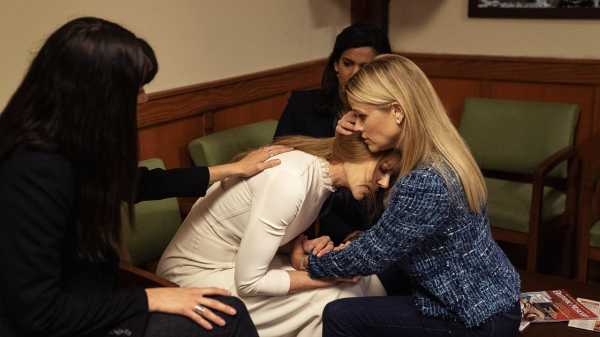 From its inception, HBO’s “Big Little Lies” was about more than the privileged mothers of Monterey, California. The series, based on Liane Moriarty’s 2014 novel, was an experiment in stardom and a metaphor for power in Hollywood. The first season, which premièred in February, 2017, starred two Oscar-winning actresses, Reese Witherspoon and Nicole Kidman, who are not the type of movie stars who typically do serial television (even of the prestige kind), alongside Laura Dern, a child of Hollywood who helped clear the path between movie stardom and HBO with her lead role in the brilliant, short-lived series “Enlightened.” The “Come on in, the water’s fine” era of A-list TV acting was over; being in “Big Little Lies” meant that you were part of an élite club, much like how the Monterey moms regard their children’s enrollment at Otter Bay Elementary School. Welcome to the pack, Shailene Woodley!

The emergent theme of the first season, though, turned out to be not the follies of the rich but domestic and sexual abuse. The finale, which aired on April 2, 2017, ended with a kind of collective murder of the abuser, Perry (Alexander Skarsgård), the violent husband of Celeste (Kidman) and the rapist of Jane (Woodley). The five main characters, previously competitors for social status, unite across race and class lines against the monster and in service of the coverup. The final image, of the women and their children together on the beach, is a dream of feminist solidarity. (A suspicious investigator looks on like a paparazzo, implying that the group won’t escape scrutiny.)

The episode turned out to be remarkably prescient. Just six months later, the Harvey Weinstein scandal brought sexual abuse to Hollywood’s doorstep. Many of its famous names were revealed to be victims, and Weinstein was pushed down the figurative stairs. On the first day of 2018, three hundred prominent women in show business announced the formation of Time’s Up, an initiative to fight sexual harassment in Hollywood and elsewhere. One of its leading members was Witherspoon, who told the Times, “We’re finally hearing each other, and seeing each other, and now locking arms in solidarity with each other, and in solidarity for every woman who doesn’t feel seen, to be finally heard.” A week later, in a striking display of that solidarity, those women (and some men) wore black outfits and Time’s Up pins on the red carpet of the Golden Globes. That night, “Big Little Lies” won four times.

That was supposed to be it for “Big Little Lies,” which had been planned as a seven-episode miniseries, but a second season, which ended on Sunday, extended the saga. Many of its critics, including my colleague Doreen St. Félix, were disappointed with the results. The writing was soapier, the editing choppier. The original finale was so satisfying—did the second season even need to exist? On an aesthetic level, that’s a fair question. But I’d argue that the second season finds its raison d’être as a parable of post-#MeToo Hollywood. This season, the characters confronted not a male victimizer but their own blindness and complicity. “I’m just sorry—I didn’t know he was doing that to you,” Witherspoon’s character, Madeline, tells Celeste in the finale. “I should have known.” It’s not hard to imagine Witherspoon having a similar conversation with, say, Ashley Judd or Gwyneth Paltrow—or someone saying it to Witherspoon, who revealed that she was harassed by a director when she was sixteen. Kidman, like Madeline, may have wrestled with her proximity; even as the first season of “Big Little Lies” was airing, Weinstein was spearheading Kidman’s Oscar campaign for “Lion.” “I purposely kept my distance” from Weinstein, she told Variety after the scandal broke. At the same time, Dern disclosed her own experience of sexual abuse, when she was fourteen, saying that her mother, Diane Ladd, had been the one to help her realize she’d been assaulted. (She later starred in “The Tale,” an HBO movie with similar themes.)

Being a female Hollywood star means something completely different than it did when “Big Little Lies” started, and Season 2 reflected a certain cognitive dissonance. Shouldn’t we have known? Can we disavow even our abusers? Throughout the season, Celeste mourns Perry, flipping through affectionate photos of him and their twin sons, loving him even as she’s liberated from him. Dern’s character, Renata, discovers that her husband is a worse scumbag than she knew (her meltdown scenes are for the ages), and Jane struggles with trust and intimacy when a new guy comes along. Zoë Kravitz’s character, Bonnie, enters a depression under the weight of the lie, and her trauma is traced back to her abusive mother (Crystal Fox), whom she strains to forgive. As various dramas wear on the characters, their unity is tested: What do these women really have in common? “The lie is the friendship,” Celeste tells Madeline.

And then there’s Meryl Streep, who was the season’s archvillain as Mary Louise, Perry’s diabolically passive-aggressive mother. With her prosthetic teeth and bargain-bin spectacles, Mary Louise is a startlingly specific creation (her resemblance to Pauline Kael, who was Streep’s foremost critic, has not gone unnoticed), but she’s also an avatar of denial, a sort of Aunt Lydia figure who upholds the worst of the patriarchy because she can’t bear to see her son as its perpetrator. Streep’s casting reinforced “Big Little Lies” as a top-of-the-A-list prestige project and also complicated its subtext. Streep herself was a beneficiary of Weinstein’s power-mongering; “The Iron Lady,” for which she won her third Oscar, was distributed by the Weinstein Company. After her anti-Trump Golden Globes speech, in 2017, she became the target of sustained alt-right attacks online; people posted video of her giving Roman Polanski a standing ovation at the Oscars and, later, party photos of her with Weinstein. After the Weinstein allegations surfaced, Streep said, in a statement, “One thing can be clarified. Not everybody knew.” Mary Louise is an elaboration: not everybody is capable of knowing.

The season culminates with a custody battle pitting Celeste against Mary Louise. With her mother-in-law on the witness stand, Celeste (representing herself, in one of the script’s soapier excesses) teases out an origin story for Perry’s violence: it all began when Mary Louise crashed the car when he was a kid and blamed him for his brother’s death. Then, without warning, Celeste plays video evidence of Perry’s abuse, taken by one of her sons. Madeline and Renata gasp from the audience. Mary Louise shakes her head, whimpering, “Stop it.” “Mary Louise, look at me,” Celeste says. “This was your son.” I was reminded of the audio recording, captured during an N.Y.P.D. sting operation and made public by The New Yorker, of Weinstein pleading with a woman and admitting to groping her. Such clear-cut, go-to-the-tape evidence isn’t always available in abuse cases, but Celeste’s coup—and the recoiling in the courtroom—conjures the moment Hollywood was forced to tear off its blinders, with some of the same players.

Some critics have said that the custody battle was a wrong turn for Season 2, but it’s as good an analogy as any for the mess that the Hollywood scandals left behind. Who gets custody of the entertainment industry in the Time’s Up world? The question became even more pointed after an IndieWire piece claimed that Andrea Arnold, who was brought on to direct Season 2, was sidelined in postproduction by the showrunner, David E. Kelley, and the executive producer Jean-Marc Vallée. The piece sparked outrage on Twitter, but much is still unknown, including the role that Witherspoon and Kidman (both executive producers) played. Arnold has not spoken about her feelings on the record, and it’s worth remembering that directors have never had much clout in television, even though hiring Arnold to direct the whole season (as Vallée had done for Season 1) suggested more of an auteur role. Still, the story hit a chord, because it raised uncomfortable questions: Are women truly gaining power in Hollywood, or are they being used as tokens? Who, in the end, had custody of “Big Little Lies”?

Forty years ago, Streep took the stand in another custody battle, in “Kramer vs. Kramer,” for which she won her first Academy Award. That film, too, had a battle for creative custody going on behind the scenes, as Streep’s co-star, Dustin Hoffman, used aggressive Method techniques to provoke Streep, ostensibly for the good of their scenes, and resisted her attempts to deepen her character, who had been conceived as a kind of second-wave-feminist bogeywoman. Just as “Kramer vs. Kramer” interrogated the fraught gender dynamics of the late seventies, “Big Little Lies” put Hollywood itself on the stand, cross-examining its complicity in the intervening decades, a period in which stars such as Streep, Kidman, and Witherspoon came to prominence and won Oscars. The underlying theme of Season 2 was guilt, and, in the end, our heroines turned themselves in to the police. “No more bullshit,” Renata tells her husband, after gloriously demolishing his train set. “No more lies.”

White House: US Intel Community to Brief Republicans on Russiagate