Home Culture “Black Monday,” Reviewed: In Praise of Regina Hall and Little Else | 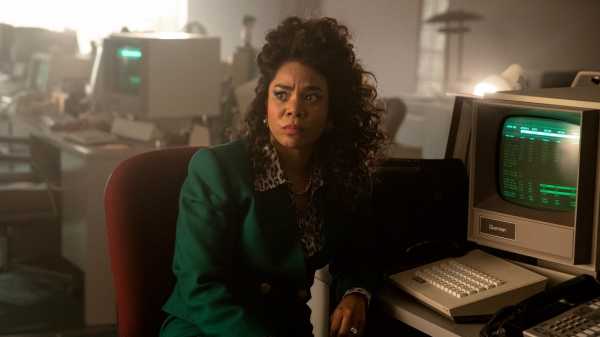 I’m perplexed by the business plan of the Jammer Group, the fictional nineteen-eighties financial firm embodying capitalist venality on “Black Monday” (Showtime). Though the Wall Street Journal hails it as the No. 11 trading firm in town, other characters deride it as a boiler-room operation. For reasons foreign to logic and essential to the season’s arc, its chief executive attempts a hostile takeover of Georgina, a designer jeans company with a Jordache aesthetic and enviable real-estate portfolio. The show, created by David Caspe and Jordan Cahan, counts on its audience to disregard detail and instead to attend to the broad strokes, such as the climate of Jammer’s office, with its stale air, clammy machismo, and ambient belligerence. An employee giving an orientation tour gestures toward a far wall: “That’s the window we throw stuff out of.” (Defenestration is a running theme: in the first episode, which opens on October 19, 1987—the dire trading day of the show’s title—a human soul hurtles from a skyscraper and crushes the roof of a floridly vulgar luxury car.)

The antihero of this scattershot comedy is Maurice Monroe (Don Cheadle), also known as Mo the Marauder, the Billy Ocean of trading, and the Freddy Krueger of Wall Street. Maurice differs from the stock figures of stock-market lore only in being a black man raised in an orphanage. He would be halfway to a provocative spoof of a nineteen-eighties banker if “Black Monday” were engaged in satire, rather than a sloppy sort of frat-bro camp. His patter flows with phrases familiar from “Bonfire of the Vanities” and “Liar’s Poker.” A nebbish with a notepad shadows him to research an untitled Wall Street project for Oliver Stone. And I detect a touch of “American Psycho” gourmandizing when Maurice hears that his takeover target is a “white whale”: “I love whale,” he replies, citing “an off-menu humpback carpaccio that’s to die for.”

Maurice pays an exorbitant amount for the Georgina stake held by Lehman Brothers, here incarnated as twins Larry and Lenny Lehman (each played by Ken Marino as a haughty sack of old money, as if Randolph and Mortimer Duke, from “Trading Places,” had been Winklevossed by David Fincher), and he acquires the services of the scrappy Wharton grad Blair Pfaff (Andrew Rannells) after ruining his other job prospects by framing him for cocaine possession. Cocaine is tediously omnipresent on “Black Monday”: in the Warhol-style society portrait of Maurice with a straw to his nose, in the aggressive grandiosity of his employees, in the restlessness of the camera, in the reiterated invocations of “Scarface,” in the sham euphoria of the rapid gags, in the excess of an aesthetic that produces tasteless period-specific jokes with wild profusion. The Len Bias reference might not feel like such a low blow if it were actually constructed as a joke.

Prefabricated referentiality is the substance of the series, you realize, while moaning at a shopworn visual gag about a cell phone the size of a bread box. When this sort of thing happens on “Pose,” it at least serves a show with sincere ambitions to capture its decade. Often, on “The Americans” and “GLOW,” excavation is evocation. But watching “Black Monday” is like being bludgeoned by a Rubik’s Cube. We are meant to take amusement from the sheer iteration, and increasing abstrusity, of the callbacks to floppy disks, shoulder pads, cassingles, Crystal Pepsi, and Jane Krakowski in the original Broadway production of “Starlight Express.” “Goddamn, this is cool, like a McDLT,” a character says. Pulling a Gatsby at his own birthday party, Maurice fails to make the scene, but he assures us that it will feature tunes by Don Henley and emceeing by Joe Piscopo. At every opportunity, the show indulges in retrograde crassness for its own sake. At one point, Maurice motivates his troops by explaining their field as a zero-sum game: “One guy gets a dope chalet in Vail. Another guy has to tell his daughter that Christmas is cancelled because Santa Claus exploded in the Challenger.”

The Jammer Group would be nothing without the skill of Dawn Darcy, who is Maurice’s top lieutenant and former girlfriend. The same might be said of the show’s reliance on the actor in the role, Regina Hall, who deploys the same talent for performing chagrin that buoys Andrew Bujalski’s “Support the Girls.” The character—scolded by her bohemian parents as an amoral yuppie, patronized by her brain-surgeon fiancé and by everybody else—explores the life of a black woman on Wall Street with an intelligence elsewhere absent. She quavers persuasively as she remembers “all the times I was called ‘hot coffee,’ or was told to get coffee, or asked if I wanted cream in my coffee, which is fucking gross.” Moreover, Dawn functions as the conscience of the show: she groans at the Challenger line before the audience can, and she articulates our objections to the nonsensicality of the plot. Still, she’s just a den mother. Cleaning up this crassness is janitorial work—it’s beneath her to manage such toxic assets.

What tasks will lie ahead for the new Leicester manager?

The public doesn’t trust GMOs. Will it trust CRISPR?

MH370 Hijackers Poisoned People on Board With Laced Tea and Flew...