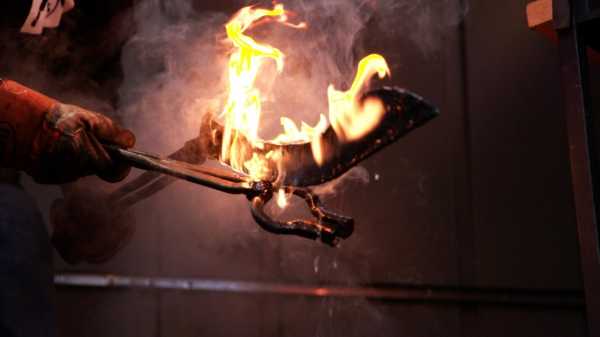 New York City is home to a community of knife forgers who work with the elements to create modern versions of ancient tools.

As the world has become increasingly digital, our culture has lost some of its connection to handicraft. Despite—or perhaps because of—the pressure to spend so much time at a computer, many people want to push back from the desk and create something with their hands. The bladesmiths featured in the new Annals of Obsession video above have all been inspired to pursue the ancient craft—using a forge, a hammer, and an anvil to make knives. And the popularity of shows like the History Channel’s “Forged in Fire” show that they’re not alone.

All of the forgers who we spoke to for the video used the word “powerful” to describe how they felt, both when making and holding the blades they created. Theo Nazz, a teacher of forging, told the story of a ten-year-old boy who took a forging course because his parents lamented that there were no longer shop classes at school. When he held a sword for the first time, he declared that it made him feel strong, though he couldn’t explain why. As a director and producer, I knew the members of our film crew could all relate. Everyone on our team carries a pocketknife; they give a feeling of usefulness, and are a kind of symbol of self-sufficiency—even if we didn’t forge them ourselves.

Mark McCall: Saracens ‘fresh and excited’ ahead of final clash with...