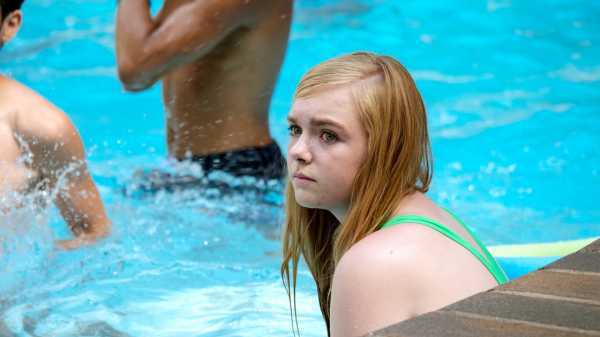 Kayla, the thirteen-year-old protagonist of Bo Burnham’s film “Eighth Grade” (which opens Friday), is burdened with a degree of niceness that not even a saint should have to contend with. The movie covers a few days in Kayla’s life in the run-up to her graduation from middle school—and they’re busy, dramatic days. Kayla (played calmly and thoughtfully by Elsie Fisher, who virtually carries the film on her shoulders) is first seen holding forth volubly on her solo YouTube advice video, but in the school’s final Class of 2017 assembly, she’s named the school’s “most quiet girl.” In spite of that built-in tension, Burnham fails to invest the character of Kayla with any substance, curiosity, interests, particulars, or—above all—impulses that would render her vital, complex, deep.

Instead, Burnham doesn’t so much imagine or observe Kayla as he assembles her, constructing the character out of a batch of traits that she’s created to exemplify. She’s socially awkward, and her nervousness is heightened by her virtual social invisibility; she appears not to have any friends, and she’s treated high-handedly by the class queen bee, Kennedy (Catherine Oliviere). The drama is sparked by Kayla’s chance meeting with Kennedy’s mother (Missy Yager), who, with friendly thoughts of Kayla’s father, Mark (Josh Hamilton), takes it upon herself to invite Kayla to Kennedy’s birthday party. Kayla is well aware that she’s not wanted there; but, taking her father’s exhortation to “put yourself out there,” she overcomes her fear and attends the party. There, she’s miserable—she swims in Kennedy’s lavish backyard pool, ignored by the other partiers, but she finds herself face to face with an openly geeky and idiosyncratic boy named Gabe (Jake Ryan), Kennedy’s cousin, with whom she shares an oddly sympathetic moment and who—ultimately—pursues a friendship with her.

Kayla, however, has a crush on a boy in her class: Aiden (Luke Prael), a tough-talking macho swaggerer who makes sexually aggressive remarks to her when she crawls over to him during a classroom active-shooter drill. Burnham’s comedic conjunction of the two incidents has a sharp symbolic power—given the frequent connection of misogynistic rage and gun violence—and he amps up both its comedy and its significance to Kayla with a glimpse at her temptation to go against her better judgment in an effort to attract and to please Aiden. The incident is a test of her mettle, and it’s followed by another similar scene that takes place under even more stressful circumstances.

Kayla’s entire class is sent to the district’s high school for a day, to “shadow” a student assigned to them. Kayla has the good fortune to be paired with Olivia (Emily Robinson), whose warm welcome extends beyond school: she invites Kayla to join her and her friends on a trip to the mall. On the way home, Kayla finds herself alone in a car with the group’s driver, one of Olivia’s classmates, a boy named Riley (Daniel Zolghadri), who attempts, under a nice-guy and just-fun guise, to manipulate her into a sexual encounter. Burnham writes the scene of attempted seduction intricately, and Fisher and Zolghadri bring out its full measure of tension; it’s the most dramatically urgent and inventively composed moment in the film—and I suspect that it’s no coincidence. In writing the boys’ brief roles, Burnham seems to have let himself go. He sees their ugly motives and doesn’t shrink from showing their evil actions. But they’re not developed characters; they’re in the movie as obstacles for Kayla to face, as tests for her to confront, as crystallized life-experiences for her to learn from. Nonetheless, Burnham seems to have a clearer sense of the boys’ misguided socialization than he does of the large-scale and full-spectrum composition of Kayla’s character.

“Eighth Grade” offers no sense of the world that Kayla lives in, observes, or imagines. She may not have any close friends, but she has, at least, acquaintances, classmates. What does she talk quietly about with her non-friends? Or, for that matter, with her father? Mark, whose wife, Kayla’s mother, he says, left the family, seemingly has no social life. What does Kayla know, or think, about her father, about her parents’ lives? Does she have a relationship with her mother? What she’s seen talking about with Mark is utterly empty; he delivers empty homilies (though she does act on his wise advice) and a climactic scene of paternal warmth is also utterly devoid of substance.

What’s more, for a film by a director who started his career as a YouTube sensation, “Eighth Grade” has, oddly enough, little of substance to say about living with social media. Kayla’s online persona, talkative and confident, contrasts with her quiet timidity in person. The contrast remains schematic, however, because Burnham doesn’t develop her online character any more amply than her in-person one—Kayla’s videos are as reticent, vague, and impersonal as her conversations. Burnham never conveys a sense that Kayla experiences her creation of an online persona as especially liberating; the movie’s perspective on social media is merely a recommendation that kids spend more real-life time together.

The movie doesn’t offer a sense of place, either (what kind of town is it, how does Kayla get around, what does she see, what’s distinctive about it, how does it shape her experience?), but Burnham aptly notes Kayla’s real-estate consciousness—her house is solidly but modestly middle-class, whereas Kennedy’s, with its in-ground pool in the back yard, is luxurious. “Eighth Grade” is filled with such fine-grained perceptions of detail, whether involving wardrobe or gesture or brand-name references, but there’s no big picture—not of Kayla’s world, and not of Kayla’s inner life.

Late in the film, in a scene signalling a moment of friendship, “Eighth Grade” features the same question—“Do you believe in God?”—that turns up near the end of Greta Gerwig’s “Lady Bird.” But the eponymous protagonist of “Lady Bird” is no angel; she cheats, deceives, steals, betrays, manipulates, and has a vigorous and complicated cultural life. The socially awkward fourteen-year-old protagonist of Eliza Hittman’s “It Felt Like Love” is similarly complex, frankly but clumsily confronting the awakening of sexual desire sparked by friendship with a girl who’s a year or two older. Hittman’s film has both a rare, nearly tactile sense of place as well as a wide range of nuanced and tough-minded relationships with family, friends, neighbors. Gerwig and Hittman don’t construct their characters as ideals of virtue but observes them as complex, troubled, and troubling people. Compare the blandness of Burnham’s writing for Kayla with Kogonada’s imaginative text for the protagonist of “Columbus”—and just wait for the release, on August 10th, of Josephine Decker’s “Madeline’s Madeline,” in which Helena Howard plays a teen-age character of astounding originality.

“Eighth Grade” isn’t so much an amiable film as it is a film that yearns to be likable and strives to be liked. Burnham doesn’t dare to give Kayla any trait that might render her humanly complicated. He doesn’t see much of the life surrounding her and he doesn’t see much of her inner life. He doesn’t grant her quiet moments of ambiguous or indeterminate or free-floating introspection, because the loose thoughts and impulsive talk of even the most responsible teen-ager runs the risk of hostility, of rage, of alienation expressed or unexpressed, of impulses that far outleap the bounds of propriety. Burnham might have done better with a character closer to himself, one whom he’d have dared to imagine fully; instead, he admires Kayla uninhibitedly, and he fabricates her to make her unreservedly, artificially admirable. It’s a tribute to Fisher’s powers of performance that she renders such a synthetic character in such a hermetic context vibrantly plausible for the duration of the film.

Pentagon Claims US Seeks No Conflict With Syria After Attacking Pro-Gov’t...