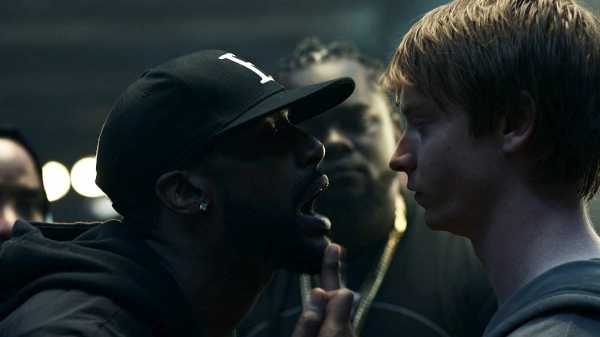 “Interesting” is a curse on a movie—it means that the film functions like a set of talking points rather than as an experience. “Bodied” is an interesting movie, and it’s seemingly interesting by design: it leans hard on hot buttons and, as a result, ends up being merely push-button. It’s neither a rewarding drama nor a substantial set of ideas, but its implications and by-products, suggestions and overtones are far more enjoyable to contemplate than the movie is to experience.

It’s the story of a white rapper—a young man named Adam Merkin (Calum Worthy), a slender, style-free, diffident Berkeley graduate student and also the son of a loud, confident, celebrated Berkeley literature professor and critic (Anthony Michael Hall). At the outset, Adam isn’t even a rapper—he’s a student of rap who’s working on a master’s thesis about the use and semantics of the N-word in battle rap, and he attends battles as part of his research. When the movie starts, he’s taking his girlfriend, Maya (Rory Uphold), to one of these battles, in what looks like an abandoned warehouse. Maya, who’s also white, challenges the rappers’ homophobic and misogynistic lyrics, wondering why Adam, who’s as politically sensitive as she is, would study, let alone condone, them.

At the event, Adam interviews a black rapper named Behn Grymm (Jackie Long), whom he admires. In the parking lot afterward, Adam gets lured into a rap battle against another white fan, and wins it, along with Behn’s surprised respect. Soon he’s invited to take part in another battle, in Los Angeles, but the unhinged crudeness of his lyrics, plus his own growing friendship with rappers, wrecks his relationship with Maya. One of his raps, in which he inventively but aggressively insults a Korean rapper (Jonathan Park), goes viral, and turns Adam into a campus pariah. He become the subject of protests, and he’s expelled from the university and from his father’s home; he becomes better acquainted with Behn and then is offered a hefty paycheck to battle him.

Throughout, the movie (directed by Joseph Kahn and written by Alex Larsen) offers scenes and moments that raise questions regarding the morality of speech: the appropriateness of a white person even quoting the N-word; the social acceptability of insults, even in the ostensibly comedic context of the rap battle, targeting race, ethnicity, gender, or sexual orientation; and the acceptability of a white person taking part in an art that emerges from black American culture.

Yet the movie also conspicuously mocks these questions of appropriateness or political correctness. The swiftness and severity with which Adam is punished for his viral video by the university’s dean, a black woman (Debra Wilson), is a crude satire on her sensitivity and vulnerability to political pressure. Behn’s wife, Jas (Candice Renee), mocks Adam for his oblivious racism (including in his own claims not to be racist), calling him a wannabe-Macklemore, rather, Mackle-less, as well as “m.c. Microaggression.” Adam’s admiration for battle rap lands him in the Catch-22 of political correctness—of ostensible pressure on white people to take interest in the culture of people of color while being pressured not to take part in it—that the movie both mocks and sets up as its crucial dramatic conflict. Peculiarly, “Bodied” is co-produced by Eminem, the white rapper whose life and work—growing up in an integrated community and rapping primordially, from his early teen years, at a time when the genre itself was still young—are exemplary rebukes to the movie’s substance and theme.

Where the movie offers anything close to an engaging experience is in the battle-rap scenes, which feature verbally inventive and physically assertive artists who unfortunately are filmed inattentively, with a camera eye on the creation of artificially forceful moments rather than on the performers’ own flows. (In particular, Dizaster, Shoniqua Shandai, and Vivian Lamolli have scintillating scenes that Kahn reduces to audiovisual boilerplate.) An academic neoclassicist, Adam approaches rap as a kind of imitation based on careful and thorough study. A young white nerdy boy with (the movie suggests) a nearly completely white circle of friends, he’s the diametrical opposite of Eminem: Adam devotes himself to the study of black American culture with zero personal relationship with any black people, zero firsthand familiarity with any aspect of that culture outside what he studies, and (almost) zero background and practice in performance.

On the other hand, the mythology behind Adam’s curious practice is one that’s baked deeply into modern artistic culture, that of nerdy outsiders who through extended study and critical analysis become suddenly as proficient as their artistic heroes. (This happens to be the—largely inaccurate—legend of the rise of the French New Wave filmmakers, who are remembered as cinephilic critics who imitated their models to become overnight successes. In fact, their turbulent and primordially creative path was more like Eminem’s.) This myth is absurdly replicated in Adam’s own impersonality and detachment, his schematic and experientially void approach to the art that he admires.

The movie may be a comedy, even a satire, but it’s both a crude and scattershot one; its dramatic arc is mechanistically determined from the start, even as its catchphrases skitter at loose ends throughout. (Long’s performance is a finely calibrated one, of dramatic intensity, that simply goes to waste.) Its principal voices of earnest insight are two black women, Jas and Dean Hampton, who are depicted as sick and tired of being sick and tired, yet are also, each in her own way, high-handed and sympathetic. The concern of young academics (both white and Asian) for political correctness is depicted as ridiculous, without any depiction of the culture of political incorrectness (not rap battles in city streets but cavalier displays of hatred and contempt in society at large and within the university itself) that it resists.

Kahn, a veteran director of music videos (and a Korean-American man), presents conflicts of conscience and culture that, in the course of the film, he merely checks off but doesn’t confront. The fact that “Bodied” is positioned as a comedy is no reason for it to treat its own themes like a joke. As for its overt subject, battle rap itself, the movie treats it from the outside, with no connection whatsoever to any particular culture. Certainly, it’s clearly a part of black American culture—most of the participants are black—but the movie doesn’t deploy even a footnote of Adam’s earnest academicism to illuminate the sociology and history of the art. It isn’t only Adam who’s detached from the experience of longtime rappers; so is the movie over all. As the drama of “Bodied” intensifies, it seems to move further and further, with increasing abstraction, from the specifics of its story and their implications. It becomes a movie about the fact that American life faces conflicts on the subject of race and ethnicity—a fact that, in those large contours, seems clear enough from the news. “Bodied” wants to be in on the conversation—and in so doing it says almost nothing. In attempting to generate interest, it renders a fascinating and significant subject narrow, dull, and trivial.

Wilder happy to accept points and escape Everton ‘as quickly as...

Fearless and brave as a lion – Solskjaer salutes 19-year-old Brandon...