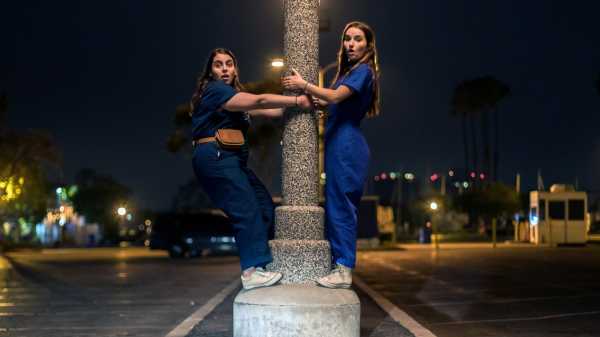 Some films embody the Trump era, some confront it, and still others ignore its existence. “Booksmart,” the first feature directed by Olivia Wilde, is in a stranger category: it’s a counterfactual comedy about a world minus Trumpism, in which ostensible blue-state values prevail, without the slightest whiff of hatreds, enmities, or hostilities, except for those caused by personal misunderstandings that are easily and quickly corrected. As a form of wish fulfillment, it’s fascinating if unpersuasive; as a vision of its subject—high-school life—it’s as faux-sweet and faux-innocent as the films of the Frankie Avalon era.

The tale is set on the last day of school, on the eve of graduation, in a posh suburb of Los Angeles. It’s centered on a pair of high-achieving high-school seniors, Molly (Beanie Feldstein) and Amy (Kaitlyn Dever), who appear to be the only two serious and ambitious students among a bunch of socialites and slackers. Even on the last morning of high school, they noodge Principal Brown (Jason Sudeikis) to join them in some student-government-related administrative work (Molly is class president), prompting him to cheerfully throw them out of his office; they go to a teacher, Miss Fine (Jessica Williams), who’s also their crossword-puzzle companion, and make plans to stay in touch while they’re in college. Molly is heading to Yale and Amy is going to Columbia; both envision careers in public service (Molly has decided that she’ll be the youngest Supreme Court Justice in history). But they don’t know where their classmates are going—the class has agreed not to talk about it amongst themselves, in order not to hurt anyone’s feelings.

That’s why the two best friends discover, very belatedly and very quickly, the extent to which they’ve been in the dark about their classmates. Seniors whom Molly and Amy consider hopelessly frivolous turn out to be high achievers as well—an in-crowd girl is going to Yale, a brilliantly popular boy is going to Georgetown, and someone who resembles the ultimate stoner has been recruited to code for Google. Molly is shocked, telling them, “You guys don’t care about school.” One of them responds, “No, we just don’t only care about school.” This is Molly’s epiphany: she realizes that she and Amy, in the dark about their classmates, have been in the dark about themselves, too, and tells Amy that they’ve been doing high school all wrong. The school’s fun-loving students have bright futures, too. “They did both,” Molly says. “We’re the only assholes who did one.” But they have a chance to get it right—they’ll pack the four years of social life they’ve missed out on into the one night before graduation.

This means, mainly, two things. First, and by design, sex: neither Molly nor Amy has been in a relationship. Amy has a crush on a skater girl named Ryan (Victoria Ruesga); Molly has a crush on the ultra-popular class vice-president, Nick (Mason Gooding); and both of them plan to do something about it quickly, by attending, or, rather, crashing, a big party being thrown by Nick at his aunt’s house. But they don’t even know where Nick’s aunt lives, and so the search for the party becomes part of their journey to maturity. That’s because the second, unsought product of their big night out is knowledge and empathy, and learning to question the disparaging assumptions they’ve made about their classmates who seemingly coasted through high school.

Molly and Amy are not devoid of fun, exactly. They’re full of cheerful whimsy, and they even do a special dance greeting when Amy picks Molly up by car every morning for school. But, at school, they are considered insufferable Goody Two-shoes. Early in the film, there’s a scene set in a bathroom, where a group of students say insulting things about Molly, who, unbeknownst to them, is inside a stall. (It’s the scene that sparks the revelation of her other classmates’ successes.) The parking spot reserved for the “class president” has the “C” and the“L” crossed out. When Molly pulls out her cell phone in class, in defiance of a ban on the devices, another student says, “Exception for ass-kissers.” In turn, Molly and Amy look upon on their classmates with contempt and condescension. The two friends are unimpeachable liberals: Molly has an R.B.G. poster in her room; Amy has a “Warren 2020” bumper sticker on her car. But their love for humanity seems to apply more in the abstract than it does to the actual people around them. During their one big night on the town, they come to realize that their classmates’ showily deceptive or brazenly indifferent public personae are reflections of ambitions and desires, fears and vulnerabilities.

The setup of “Booksmart,” written by Susanna Fogel, Emily Halpern, Sarah Haskins, and Katie Silberman, is built on a substantial idea and a simple, stark dramatic mechanism; it’s adorned with verbal whimsy and brought to life by a vibrant cast (Billie Lourd and Skyler Gisondo are exceptional presences, alongside the two stars). But its substance is scantly developed, its clear and simple premise dismayingly oversimplified. Despite the emotional authenticity of the protagonists’ dilemma, their journey comes off as a fantasy. Its perspective is as Manichean as one might expect to find in a doctrinaire religious or political film: the little world of “Booksmart” is divided into people with decent motives (almost everyone) and sociopaths (one person). It’s a teen drama that, I suspect, hardly any teens will want to see, or, if they do see it, will hardly care about, because it doesn’t at all resemble the high-school snark tank. The movie seems calculated to elicit only “Aww”s, “Yay”s, and “Boo”s, and there aren’t many “Boo”s at all.

There isn’t anybody in school with an actual mean streak or a penchant for causing trouble. There isn’t anybody with a big problem, whether with family, poverty, drugs or alcohol, or with illness, physical or mental. There are no cliques to be seen, nor hardly any variety of tastes and interests among the students (yes, the theatre kids are a beloved group of their own). There’s no shortage of sexualized talk, and there are even some blatantly sexual situations—including a scene in which Miss Fine has sex with one of her former students (Eduardo Franco), who has been brazenly flirting with her—but it’s all portrayed as untroubled, cheerful, and innocent. There’s no religious dogmatism (the only apparently religious people are Amy’s parents, extremely liberal Christians who practice a cheerful brand of extreme tolerance that is itself a source of mildly and warmly satirical comedy). The school is predominantly white but unquestioningly tolerant of the diversity in its population—not that its diversity ever asserts itself in any conspicuous way. The milieu is also conspicuously moneyed, and it’s exemplary of the movie’s class politics that the only true villain is a workingman in a service job. (By contrast, the movie’s show-offy rich kid turns out to be a model of benevolence and philanthropic virtue whose big problem is that his classmates make mistaken assumptions about him based on his family’s absurd wealth.) As for Molly herself, she lives in a modest apartment complex, but her parents—and her family story—are completely absent from the film.

This is all very far from the poignancy and complexity of “Lady Bird,” the unhinged adventures of “Superbad,” and the acerbic insights of “Mean Girls.” If “Booksmart” intersects with the latter film, it’s through the character of the Cool Mom, who gushes over her daughter and her daughter’s friends and completely overlooks their nasty side—exactly as “Booksmart” does over all. There is one directorial choice that sums up the movie’s way of sweetening even its harshest experiences. Molly and Amy come to bitter disagreement in the midst of their big night (this, too, sparked by an unexpressed virtuous motive) and they say some hurtful things to each other—which their classmates are recording on their cell phones and surely preparing to post online. But, as the two girls’ invective sharpens, the dialogue cuts out and is replaced by the blare of music. It’s as if Wilde can’t bear to hear the protagonists say things that they’d have any trouble getting over. The film gives no sense that the event becomes an actual social-media spectacle, or that there’s any residual embarrassment, shame, guilt, or anger—in the end, the characters seem incapable of experiencing any strong, lasting, painful emotions at all.