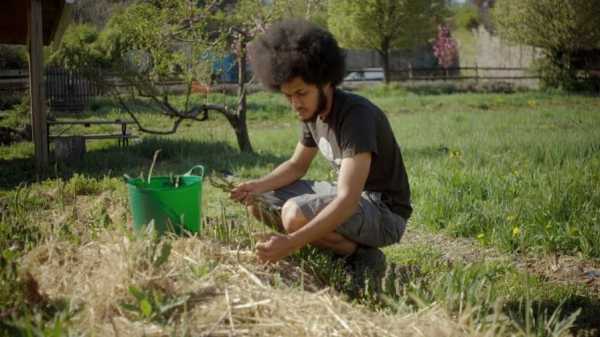 The short documentary series “Braddock, PA,” which was directed by Rosie Haber, and came out last week, on Topic.com, is a portrait of a working-class American town which feels both emblematic and quietly surprising. In four episodes, each of which lasts just a few minutes, the series gives us a vivid sense of place and politics; watching it this summer, in this anxious pre-midterms moment, might just fire you up even more. Braddock, east of Pittsburgh, on the Monongahela River, is marked by natural beauty and industrial decay. Centered on the Edgar Thomson Steel Works mill, it was once a thriving company town. The mill is still going—the film tells us that it’s been running twenty-four hours a day, year round, since it was built, in 1872—but Braddock has been struggling for decades, economically, environmentally, and otherwise. Some of the images of the town’s buildings, overgrown with weeds, remind us of the ruins we’ve seen in Detroit.

As the first episode, “Poison,” opens, we see trees, a train, a steel mill, and steelworkers. Several locals, unidentified until the end, tell us about their home. “This is the town that essentially built America,” a woman’s voice says. “Our steel is the steel that catapulted the United States into the industrial revolution.” The color palette is close to realistic—East Coast vegetation against blue-gray buildings and industry—but only just. What appears at first glance to be a gorgeous fuchsia-pink proliferation of spring flowers turns out to be something else. As the shots of Braddock continue—smokestacks, crumbling edifices, aging wooden houses—the locals describe dangerous working conditions and pollution-related respiratory problems, and we’re mesmerized by the visuals, which teem with that same pink vegetation: grasses, hillsides, vines growing over abandoned buildings. All this pink is an effect of Haber’s infrared photography, which suggests the effects of pollution—nature gone wrong—without feeling overly literal. “I don’t want our town to be a ghost town,” the woman says. We see her standing in a field of roaring pink, under a sky of smoky clouds. She’s young, African-American, serious, confident. With a hint of a smile, she raises a fist. This is Summer Lee, a progressive Democratic candidate for the state legislature; she returns later in the series.

The rest of the episodes focus on a character or two, in the style of traditional documentary. In Episode 2, “Roots,” we learn a bit about Braddock’s history through moving archival footage and the stories of two locals, Tony Buba, a white documentary filmmaker born in 1943, and Isaac Bunn, a younger black community organizer. “Braddock was always declining, ever since I remember,” Buba says. In the twenties, the town had a population of twenty thousand; in the fifties, it was down to about twelve thousand. (Now it’s about two thousand. It would have been helpful if the film had clarified that more directly, and also that several other nearby mills and plants have closed down.) Buba and Bunn are sons of Braddock steelworkers, but they grew up under very different circumstances, which were heavily determined by race. Black people tended to live in the Bottom, the area of town near the mill; white people tended to live on a hill, and then left for the suburbs, aided by housing loans that were denied to black people. Black workers at the mill were given the least desirable jobs—what Bunn refers to as “man-killing jobs.” Cancer rates are markedly high in Braddock, as are asthma rates. Buba and Bunn have multiple close family members who have had cancer, and some have died from it.

In the third episode, “Land,” we meet a young urban farmer, Robert Grey, who grows food in Braddock. The soil is carefully and frequently tested, he says, and the produce should be relatively safe to eat. But he worries about his respiratory health. Grey and his girlfriend met in an abandoned blast furnace that local youths like to explore and be weirded out by; the couple is sweet and quietly idealistic, and we see them holding sparklers and looking out at lights of the city. The final episode is a love letter to local politics, with notes of the Alexandria Ocasio-Cortez story. It follows Summer Lee as she knocks on doors and runs her campaign for the state legislature from within a local barbershop. Her opponent is Paul Costa, a longtime Democratic incumbent from an established white political family. Lee is passionate about Braddock and its economy, and about social justice and environmental issues. “I wanted to be a civil-rights activist when I grew up,” she tells the camera at one point. “I mean, you don’t get paid to be like Malcolm X. I would’ve done that if that was a job, though.” She laughs and thinks for a second. “But I kind of am, in a sense.” She’s funny and casual—“they trying to record us talking and stuff, and you’ve got this lovemaking music on,” she says to her mother, amused, during a scene in a car—but also focussed, confident, and bracingly smart. The fact that Haber caught this tiny but dramatic race at its crucial points feels like a coup, and it’s exciting to watch.

In a media climate seemingly dominated by sympathetic portraits of the white working class, “Braddock, PA” feels like a refreshing corrective. The town’s been extensively covered before, but the series, in a little more than thirty minutes, supplies a deft primer on a diverse, mostly black working-class community whose struggles touch on issues of national interest. These include questions about old industries versus new economies; about housing, health, and the environment; and about progressivism versus centrism. The series isn’t in-depth enough to tell Braddock’s whole story, or even its full outline; it’s a bit like a more poetic “Better Know a District,” the old “Colbert Report” segment. There’s barely a hint of Braddock’s unconventional and much publicized mayor, John Fetterman, who is now running for lieutenant governor, but it does include observations about some of his initiatives (which also have parallels with the recent history of Detroit). The series doesn’t tell us about Andrew Carnegie, who founded the Thomson mill and named it after the president of the Pennsylvania Railroad, or the fact that the mill’s fortune came in part from train rails, though there are many beautiful shots of trains snaking alongside the Monongahela River. But, if you were previously unfamiliar with this piece of the American puzzle, it’s engaging enough to make you care about it with some personal investment. (It might even inspire you to dig into more work about the area, such as an accompanying photography series and essay on Topic, “In the Shadow of the Steel Mill”; Sue Halpern’s profile of Fetterman, in the Times Magazine; or Eliza Griswold’s New Yorker writing on Summer Lee and Pennsylvania politics.) In its beauty and brevity, “Braddock, PA” functions as a pro-community, pro-democracy stimulant; it urges us to participate, with the quiet resolve of Lee’s smile and raised fist.

Republicans were supposed to run on their tax cuts. Instead, they’re...

Defexpo India 2020 Exhibition to Open in Lucknow on Wednesday