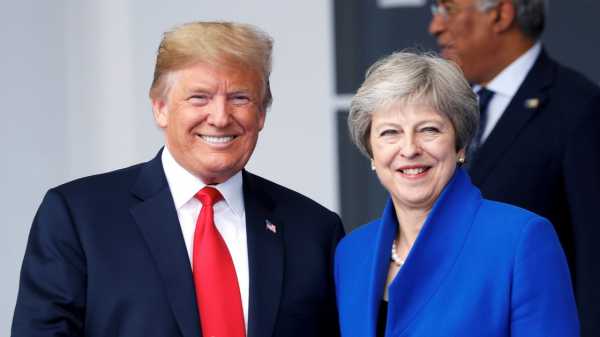 On Thursday, Donald and Melania Trump arrived in England for a working visit with the British Prime Minister, Theresa May. Before their arrival, the BBC reporter James Robbins described the trip as “the most controversial visit ever made by an American President to Britain.” The First Family has not been received with much enthusiasm. Sizable protests have been planned in London, Glasgow, and dozens of smaller cities, and a twenty-foot balloon depicting Trump as a chubby, diapered baby clutching a smartphone will soar over Westminster for two hours on Friday. Meanwhile, a mischievous grassroots campaign is afoot to place Green Day’s “American Idiot,” a hit from 2004, at the top of this week’s British pop chart. (This is a dissent tactic the British citizenry have deployed before: in the week following Margaret Thatcher’s death, “Ding-Dong! The Witch Is Dead” made it to No. 2.)

“American Idiot” is the title track from Green Day’s seventh record, a concept album inspired in part by George W. Bush’s Presidency and the Iraq War. Its songs follow the political awakening of a young, lower-middle-class antihero named Jesus of Suburbia, who sits around watching television, drinking Cokes, and doing drugs in some sleepy American hamlet, until he finally can’t take the tedium and loneliness anymore and splits for the city. The record, like much of Green Day’s discography, is about the emotional turmoil of coming of age, and how to best harness wild, gnawing adolescent rage. The band’s vocalist and lyricist, Billie Joe Armstrong, sings in a burly, nasal voice that’s often tinged with a deep longing.

“American Idiot” represented the final stages of a cultural sea change for Green Day, which was vilified for disavowing its punk-rock roots when it released its third LP, “Dookie,” through a major label, in 1994. By the end of the next decade, indignation about corporate interference into independent art had, for better or worse, slackened, and in 2010 an adapted version of “American Idiot” made its Broadway début, a move so flagrantly mainstream it nearly felt punk-rock again. That the single is now being used as a protest tool—manipulating a sales chart to situate Trump on a continuum of American Idiots—feels satisfyingly true to the band’s pugnacious roots.

Righteous and agitated, “American Idiot” chiefly indicts the twenty-four-hour news cycle and the way in which it has ushered in the apparent end of free thought:

In 2018, it’s unclear whether media addiction is still (or ever was) a uniquely American problem, but the lyrics do feel oddly applicable to the present Administration—both to Trump’s crusade against journalists and his ability to manipulate and entice his constituents using tactics seemingly gleaned from reality television. The idea that the average American—or any regular consumer of mass media—has somehow lost all ability to receive, process, and judge information purely on its own terms, without filtering it through a Twitter feed or some comparable thought-sieve, is terrifying. The Brits might be pushing the song onto the charts purely for the salience of its title, but the world Armstrong describes in the track feels more familiar than ever.

It’s too soon to tell whether the campaign will succeed in pushing the song to No. 1, or, more importantly, whether doing so will actually irritate the President. Trump is, of course, easily needled by inane gibes. While he will stay oddly silent about tens of thousands of terrified teen-agers thronging the capital to demand safer schools, he will get supremely steamed at, say, Jimmy Fallon, when he expresses mild regret about having once tousled Trump’s hair on television. Though Trump’s personal yardstick for embarrassment remains inscrutable to many of us, it’s clear that certain kinds of public humiliation do make him itchy. Ergo, if you live in the U.K., and have got ninety-nine cents to toss to the wind—there’s still time to purchase the single.

China is installing a secret surveillance app on tourists’ phones