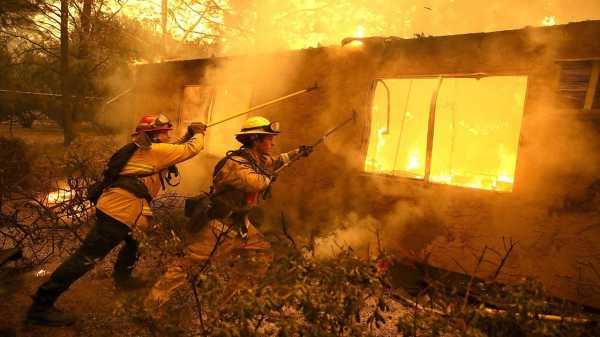 Hopeful stories were not in abundance this past fall, when the Camp Fire, in Northern California, all but erased the small town of Paradise, killing eighty-six people, and the Woolsey Fire consumed nearly a hundred thousand acres between Thousand Oaks and Malibu and sent a quarter of a million people running for their lives. During the Woolsey Fire, I checked in with my friend David Hertz, an architect and sustainability expert who had, about a year before, sold his Venice home—made famous house on the TV show “Californication”—and, with his wife, Laura Doss, bought a ranch in Western Malibu. They named it Skysource Ranch; Hertz had recently won the X Prize to develop a system, called Skysource, for creating water from the air and energy from biomass. When the Woolsey Fire came, he was better prepared than most. For months, he had been rebuilding homes devastated by the 2017 Thomas Fire, which he and Doss had seen lighting up the next ridge to the west. He made Skysource Ranch his resiliency lab, using his eighty-thousand-gallon pool and twenty thousand gallons of water stored in tanks and also spraying all of his trees and buildings with a flame-retardant coating that was developed by NASA as a heat shield for the space shuttle. The property had some special considerations. In the nineties, after the Green Meadow Fire destroyed his home, the Hollywood set designer and decorator Tony Duquette had taken refuge there, bringing along sets that he had made for “The King and I.” While staying at the property, Duquette built a series of fanciful pagodas: Hertz and Doss felt a responsibility to keep them from becoming high-end, historical kindling.

For several hellish, windy days, fire whipped around Skysource Ranch—even after firefighters had drained the tanks in their effort to put out surrounding fires, leaving Hertz to rig a pump to extract water for his own hoses from his swimming pool—but, in the end, the place was spared. (Right now, Hertz and Doss are hosting less-lucky friends, including the artist Lita Albuquerque, whose studio, containing fifty years’ worth of work bound for the Smithsonian, burned.) Like others, Hertz has turned with urgency to the question of how to build now, in the context of increasingly extreme weather. In the above video, “Fireproofing the Future in California,” residents return to their homes after the recent wildfires. Many have been destroyed, but the architects John Davis and Lorrie Brown return to find their house in the fire-vulnerable chaparral almost “pristine,” thanks to construction details including metal barn doors to protect against flying embers and a gravel buffer separating the house from the surrounding grass. With more homes being built in fire-prone ecosystems, and wildfires increasing in frequency and intensity, such measures may need to become more common.

When I spoke to Hertz again recently, he told me that he has been researching composting soils that quickly break down leaf and pine litter, suppressing fire, and biodegradable flame-retardant foams. Hertz does not advocate defying evacuation orders but knows that it’s inevitable that some will stay behind to defend their homes. For them, he is designing structures for sheltering in place. “It’s necessary, especially for architecture and design professionals, to understand how to live in a much more extreme world,” he told me. “If the past is prologue, the feds may not be coming with FEMA help, and the fire department might not come. You’re on your own. Resilience is the key.”