Home Culture Can President Trump Be Held Accountable for the Whistle-Blower Complaint? | 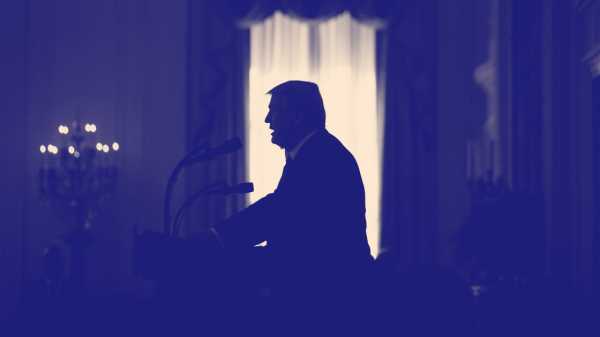 This week, a whistle-blower complaint from a current or former U.S. intelligence official about President Trump developed into a major political controversy. The complaint reportedly concerned Trump’s interactions with a foreign leader, who was later identified as the Ukranian President, Volodymyr Zelensky. Under the Intelligence Community Whistleblower Protection Act of 1998, intelligence officials can report an “urgent concern” to the Office of the Inspector General, who is in turn required to transmit “credible” concerns to the Director of National Intelligence (D.N.I.). He or she, in turn, has seven days to “forward such transmittal to the intelligence committees, together with any comments the Director considers appropriate.” The goal is to insure that Congress learns of the complaint and can carry out appropriate oversight of the executive branch. In this case, the inspector general, Michael K. Atkinson, deemed the complaint worthy of investigation. But, after consulting with the Justice Department, Joseph Maguire, the acting D.N.I., did not release the substance of the complaint to Congress, refusing to deem the complaint an “urgent concern” because it had to do with someone not under the “responsibility and authority” of the D.N.I. This prompted outcries from Democrats, with the House Intelligence Committee chairman, Adam Schiff, saying, “there is no privilege that covers whether the White House is involved in trying to stifle a whistle-blower complaint.”

Meanwhile, the President’s attorney, Rudolph Giuliani, admitted that he had pressured the Ukrainian government to open an investigation into former Vice-President Joe Biden and his family. And, on Friday, the Wall Street Journal reported that Trump had personally asked Zelensky to do so “about eight times,” encouraging him to work with Giuliani on the investigation. This immediately raised questions about whether Trump was trying to leverage the Presidency to gain information about a political opponent, and in the process sparked the whistle-blowing complaint. (Trump replied on Twitter, “Strange that with so many other people hearing or knowing of the perfectly fine and respectful conversation, that they would not have also come forward. Do you know the reason why they did not? Because there was nothing said wrong, it was pitch perfect!”)

To discuss the legal issues involved in the Administration’s refusal to hand over the substance of the complaint to Congress, and possible wrongdoing by the President, I spoke by phone with Stephen Vladeck, a law professor at the University of Texas and an expert on national-security law. During our conversation, which has been edited for length and clarity, we discussed the remedies for Presidential misbehavior, the debates over executive power in the Trump era, and what the next Congress should do to prepare for a future President like Trump.

Is there any way that a President could break the law by making either a promise or a threat to a foreign leader?

This gets us back to the whole debate over whether Presidents are subject to criminal prosecution for anything. My own view is that the answer is yes, there are things the President can do that would be illegal. I am just not sure there are criminal as opposed to political consequences for it.

Let’s put aside the idea of impeachment versus prosecution. Given the broad executive powers we afford Presidents, rightly or wrongly, how could a President break the law?

Let’s say, pulling two scenarios out of a hat, that the President is only going to follow through on giving aid to a country if the country either investigates his political opponent or pays him a bribe, by, say, spending a night at his resort in Scotland. How would you evaluate those two issues?

I think the latter is a more straightforward legal problem because of anti-bribery statutes and because of a statute called the Foreign Gifts and Decorations Act, which clearly applies to the President. The former is messier, but, to me, this is the big category error everyone is making, which is that, criminal or not, that is certainly impeachable.

Until this episode, I don’t think that anyone has read the intelligence-community statute to be limited to unlawful conduct by the subject of the complaint, or that you have to identify a specific law that the subject of the whistle-blower’s complaint has arguably violated. The question at the bottom of this whole episode is whether what the President allegedly did falls in the scope of something that would give rise to a valid whistle-blower complaint. I think there are a lot of folks who are arguing that the answer is no because the President is allowed to say whatever he wants in this context. I think the statute doesn’t limit whistle-blowing in this context to identifying specific federal statutes that the subject of the complaint has transgressed.

Jack Goldsmith, the conservative legal scholar, tweeted, “I don’t think there is a legal avenue to correct such a betrayal of national trust by the Chief Executive and Commander in Chief. That is one of the accommodations the Constitution makes for the benefits of a vigorous Presidency who can conduct foreign policy in secret.” What is your response to this argument?

[Laughs.] I think that is a pathway to authoritarianism. Jack is jumping from no prosecution to no oversight, and I think that is a distinction that the law actually reflects. It may be that the President is not breaking the law when he does that. That doesn’t mean that Congress or at least the intelligence committees don’t have a right to know what he is doing.

Right, but as a purely legal matter, how do you view that idea of executive power?

I think it is a pretty scary view of executive power.

Would one response be that it is unfortunate but true that the Constitution, or the way it is interpreted, give a pretty scary view of executive power?

I think the short version is: yes. There are plausible ways to read the Constitution to give the President a scary amount of executive power. We have seen a lot of that, regardless of your politics, whether it is Democrats looking at Trump and [George W.] Bush or Republicans looking at Obama. Where I think Jack and I really diverge is on the constraints and the checks on that power. Jack thinks the principal check on that power is the ballot box. And I think the Constitution and the relevant statutes contemplate a meaningful role for Congress, not in prohibiting the President from doing all of these things but in holding him politically accountable when he does.

What is your reading of the intelligence community’s refusal to turn over this information to Congress?

I think it is just wrong. It would be one thing if the reason that they are refusing to turn this over to Congress is because they believe that turning the complaint over to Congress would violate some constitutional privilege. But the actual argument they have made, at least in the two letters they have made public, is a very counterintuitive reading of the statute.

If the D.N.I. continues to refuse to submit this to Congress, are there any legal remedies for the congressional committees?

What did you make of the D.N.I. going to the Department of Justice to seek legal counsel on submitting the report to Congress?

I am not troubled by that, because the statute does contemplate that the acting D.N.I. is allowed to share his own views on the complaint. And so, if the acting D.N.I. went to D.O.J., the D.O.J. says these things, and the D.N.I. writes a letter to Congress in which he transmits the report and says, “I disagree for the following reasons, in consultation with D.O.J.” To me, this is the system actually working fine. The problem is not that Maguire went to D.O.J.; the problem is that when D.O.J. told him not to transmit the report, he listened. I think D.O.J. is misrepresenting his legal obligations under the statute.

That’s obviously a huge question. I think there are two levels of response to the Trump phenomenon. One is to make much clearer the ability of courts to decide some of these inter-branch disputes. So, as opposed to all of these political impasses over subpoenas, or whistle-blower complaints, or emoluments, where there are questions about whether the court can play any role, the first thing Congress could do is to make it much clearer that Congress wants the courts to play a role in these contexts. So that whatever the merits of these disputes are, there is a greater likelihood that the merits will be reached and resolved.

And the second thing—and this wouldn’t really help us in this scenario or get us out of the sticky wicket in the whistle-blower context—but, more holistically, there are all kinds of contexts in which Congress has granted the President power that Congress can also only claw back with a veto-proof supermajority in both houses: The border wall, A.U.M.F. [the Authorization for Use of Military Force, from 2001], court vacancies. It seems to me that Congress ought to get more in the habit of imposing sunsets on authorities—where, whether we are worried about Obama or Trump, we think Presidents have gone far past what Congress ever could have intended. It seems like Congress can preserve a role for itself in these same contexts going forward, if it has more and more of these authorities sunset.

‘Pharma Bro’ gets 7 years in prison in securities fraud case

New Pennsylvania congressional map could impact balance of power in the...