Home Culture “Can You Ever Forgive Me?,” Reviewed: Melissa McCarthy Finally Gets the Dramatic... 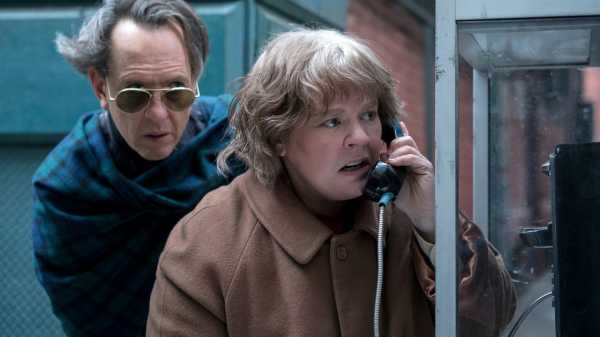 Melissa McCarthy has been in need of a substantial dramatic role for quite a while, and in “Can You Ever Forgive Me?,” which opens on Friday, she gets one—and makes the most of it. But it’s clear, from the very first scene, that the movie, directed by Marielle Heller, is far more than just a showcase for McCarthy’s artistry. The film tells the story of the real-life writer and literary forger Lee Israel, and is based on Israel’s memoir of the same title. It is a fiercely composed, historically informed, and richly textured film, as insightful regarding the particularities of the protagonist as it is on the artistic life—and on the life of its times..

The action begins in 1991 and is set in Manhattan. Lee, a proofreader working an overnight shift in a law firm and an object of her younger colleagues’ derision (which she repays in sarcasm), is fired on the spot, not for drinking on the job (which she’s brazenly doing) but for cursing out the young supervisor who reproaches her. Lee brusquely finishes her tumbler of Scotch, dumps the ice cubes into the garbage can under her desk, and puts the glass into her tote bag before leaving. The gestures have a pugnacious elegance; the text (from a script by Nicole Holofcener and Jeff Whitty) is rich in epigrammatic flair. Above all, Heller achieves an extraordinary, tense balance of moods and tones that yields sharp dramatic insight. Lee’s playful inventiveness and flamboyant attitudes do more than fuse with recklessly self-destructive behavior; they also incite and inspire it.

“Can You Ever Forgive Me?” is set at the crossroads of money and art. Lee was once a biographer who appeared on the Times best-seller list, but she can no longer find a publisher for any of her projects of cultural history from a woman’s perspective. Her main plan, a biography of Fanny Brice—the comedian who was portrayed by Barbra Streisand in “Funny Girl”—comes to naught. She’s never held a day job before, and her acerbic, cantankerous demeanor gets in the way of her keeping one now. In any case, as the movie makes clear, the research-heavy, travel-based work of nonfiction requires both time and money. The new, celebrity-heavy world of corporate-merger publishing has little room for her. No advances are forthcoming. Lee can’t pay her rent, nor can she pay the veterinarian to care for her aging cat. She even steals toilet paper (and other, more lavish commodities) from a publishing party. When she’s compelled to sell a prized possession—a letter Katharine Hepburn wrote her when she was working on a profile of the actress—a lightbulb turns on in her mind.

After finding, by chance, a letter from Brice between the pages of a library book, Lee steals it and tries to sell it. Learning that its value would be increased if its contents were spicier, she spices it up with a flourish of a P.S. that seems to emerge from her own mind-meld with her cherished subject. Lee quickly morphs from a biographer into impersonator, relying on the same skills that she used to enter into imaginative sympathy with the people she wrote about. She becomes, in effect, a writer of docufiction, setting up a cottage industry of fabricated letters from celebrities she “gets,” including Marlene Dietrich, Noël Coward, Edna Ferber, and Dorothy Parker—writers whose identities are plotted on the dimensions of womanhood, gayness, Jewishness, sharp wit, and artistic talent. (The movie revels in the material specifics of her deceit, involving old manual typewriters, replicated letterheads, signatures that she forges by using an upturned TV set as a lightbox, and paper that she ages in her oven.)

Lee is single, but is still in close mental proximity to her ex, Elaine (Anna Deavere Smith). She’s also back in touch with a former acquaintance, Jack Hock (Richard E. Grant), a gay man who’s H.I.V-positive, homeless, free-spirited, defiant, and—like Lee herself—quietly and proudly desperate. As their friendship grows, he takes note of Lee’s sudden and unwarranted solvency and asks about it. “Can you keep a secret?,” she asks. “Who would I tell?,” he replies; “All my friends are dead.” The devastation of the AIDS crisis is also at the center of “Can You Ever Forgive Me?,” and Heller, pointedly and surely, creates a work of mourning for its victims and of gratitude for the community of activists who fought for rights, respect, and treatment—and cared for the stricken among them.

The movie is sharply historically informed, down to its urban geography. The bar that Lee frequents, and where she meets Jack, for the first time by chance and later by design, is Julius, a longtime gay bar in the West Village and the site, in 1966, of the Sip-In, a historic protest against the city’s anti-gay laws and the bar’s own discriminatory practices. It’s not expressly a story of activism; Jack is depicted as an apolitical hedonist (he also gets involved in Lee’s criminal scheme), but he, too, is in his way an artist (also a heedless and sometimes destructive one)—an artist of life, whose ardent vitality contrasts cruelly with his fate.

The decimation of the gay community marches alongside the decimation of the city’s artistic culture. “Can You Ever Forgive Me?” is a movie of endings, a mournful film, suffused with an air of doom, in which the sort of genteel literary poverty that kept Lee going can no longer be sustained. Even the core of her art, her caustically aphoristic brilliance, comes off as a defense mechanism, not merely against the usual buffeting winds of life but against prying and suspicion from an age when L.G.B.T. people were the subject of severe legal discrimination and social prejudice. The scintillating verbal inventiveness that’s essential to her art, and to her personal allure, is also an electrified fence that enforces privacy, even at the price of desperate solitude.

Heller’s geographic specificity includes appealing glimpses of some of the borough’s most picturesque bookstores—happily, ones that survive to this day, such as Argosy, Westsider, the Housing Works Bookstore Café, and Logos. With their venerable charm (filmed lovingly by Heller, with incisive, nearly matte-seeming cinematography by Brandon Trost), they nonetheless have the fragile air of survivors of a series of storms—and Lee’s own fraudulent sales of fabricated memorabilia turn out to be among the threats that these businesses face.

These sales, and the confidence game that she plays with dealers in order to make them, are dramatized in outrageously careful criminal detail—as well as in their personal implications, both for Lee and for the buyers. In particular, a woman named Anna (played by Dolly Wells with a tremulous grace), who admires Lee’s voice and bearing, falls further under her spell, with painful results. The entire cast performs at a perfect pitch of slightly heightened tension that lends their range of emotions—confrontational worldliness, brave-faced struggle, solitary pride—a striving pitch of urbane intensity. In particular, Grant, as Jack, seems to bear a vast history of pleasure and trouble with a breezy flair, and, as Lee’s agent, Jane Curtin delivers hard wisdom with a devastating deftness.

Above all, McCarthy infuses the role of Lee with many levels of imagination. McCarthy is one of the most verbally inventive actors of the time and, playing a person of learning, imagination, and experience, her verbal inventiveness is no mere comedic adornment but the core of the character’s identity, and she flaunts it with a pathos that suggests the essential doubleness of art, its element of gaudy artifice as well as of intimate self-revelation. The pivot of the action is Lee’s unwillingness to expose her own life and character to the scrutiny and criticism of readers, and the gap that her inhibition—one born of her fortress of privacy—makes between her artistic soul and her artistic voice.

The movie never excuses or minimizes Lee’s crimes (which eventually include the theft and sale of authentic letters); yet it considers them in the paradoxical light of her own talent, which, she asserts, was revealed more definitively in those forgeries than in her prior avowed works. The confessional book itself, on which the movie was based—and in which Israel cites and discusses these fraudulent works of her authentic artistry—provides a fascinating nonfiction view of these fictions. But the movie adaptation reaches beyond its source to broaden its backdrop and evoke resonant depths of mood, context, history, and perspective. It’s one of the rare movies that give a cinematic identity to literary creation, that virtually bursts with the athletic pleasure of imagination. Heller’s images are simple and poised, lucid but weighty—they vibrate with the expressive force that they condense and contain.