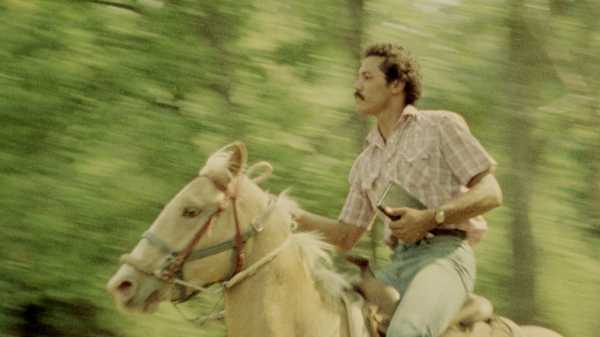 The cruellest strains of contemporary American life are inseparable from the cruellest aspects of American history. Many of the best works of modern American cinema dramatize that history in the hope of resisting and overcoming its insidious power. One such film, “Cane River,” the only feature by Horace B. Jenkins, from 1982, was nearly lost—Jenkins died soon after completing it, the film went undistributed, and no archival print survived. The negative turned up in 2014, however, and “Cane River” was restored, thanks to a campaign by IndieCollect (which also recently brought Jan Oxenberg’s film “Thank You and Good Night” back from oblivion). It’s being shown January 18th and January 31st at MOMA, as part of the series “To Save and Project,” and its rediscovery plants another missing beacon in the history of cinema, one which ought to have been an exemplary guide to other filmmakers in the meantime.

“Cane River” is the story of a young man named Peter Metoyer (Richard Romain), a recent college graduate and college football star who has turned down the N.F.L. draft (and the New York Jets) to return to his home town of the title, in rural northwest Louisiana, to work on his father’s farm and write poetry. (The moment he steps off the bus, he’s greeted by a crowd of relatives, friends, and neighbors as a returning hero.) He’s a black man in a predominantly black community, but it’s an unusual one—he’s descended from mixed-race Creoles, whose skin color tends to be lighter than that of other African-Americans. (Jenkins, a black filmmaker, based the story on the family of his partner, Carol Balthazar.) Because of their French heritage, members of the community are Catholic and were relatively prosperous property owners and socialites of sorts—and the Metoyers are among the most prominent of these families.

Upon his return home, Peter visits a local attraction, a well-preserved eighteenth-century estate that was owned by his distant ancestors. There, Peter encounters a tour guide named Maria Mathis (Tômmye Myrick), a scholarly woman of twenty-two who’s about to head off to college, in New Orleans. She lives in the town, too, but is desperate to escape and, as she puts it, “see the world.” Peter and Maria become fast friends; they bond over a book that she’s reading, a history of the estate, which Peter borrows. Despite the quickly burgeoning, sweet, and mature romance that develops between them, Peter’s family history presents an obstacle: as Maria knew and Peter learns, the estate was founded by an enslaved African woman who married a French man and then herself owned slaves. Peter’s ancestors collaborated with the Confederacy in the Civil War, and, to this day, the Cane River Creoles keep apart socially from poorer, mostly darker-skinned black people, who are, in turn, wary of them. Maria’s mother (Carol Sutton) is especially distrustful of Peter and insistent on separating the pair.

Jenkins, working with the cinematographer Gideon Manasseh, films the couple with an ardent lyricism that catches their youthful high-spiritedness, smart banter, and physical grace in vigorous motion. “Cane River” is very much an outdoors movie that deeply inhabits its landscapes. Peter’s father and their neighboring friends raise horses; Peter is a skilled and experienced rider, as is Maria, and Jenkins shows them on plein-air adventures through the countryside, along the river, and at the lavish grounds of Peter’s cousin’s homestead near New Orleans. Even their walks in town and their rides in Peter’s convertible sports car have a hearty, sun-drenched swing—but it’s a dialectical swing, in which much of the fast talk is also heartfelt, historically informed, deeply principled, and pain-filled.

For Peter, the countryside is a heritage as well as a literary inspiration. (His idea is to write popular poetry, i.e., songs; his heroes are Gil Scott-Heron and Earth, Wind & Fire.) For Maria, it’s something different: for all its evident beauty, it’s also a mark of oppression, of deprivation. Her mother, a widow, works as a house cleaner; her brother (Ilunga Adell), a former star athlete, holds down a deadening job at a food plant and drinks heavily; and her dream of an education, which, years after her high-school graduation, she’s finally about to fulfill, is also a dream of escaping her family’s tight supervision and the burdensome traditions and norms of the town. Even more important, she’s in conflict over romance itself—her main plan is to prepare for a career that will render her financially independent. She views cavalier men who leave their families and her own father, who died through no fault of his own, the same way: as abandoners whose departures leave their wives desperate and destitute.

But Peter’s view of the land is also a matter of money, of real estate, and of family legacy, and, upon his return home, he finds these circumstances changed. While he was away, a piece of land that had belonged to his grandmother (and where he’d lived as a child) ended up in the hands of a white businessman. His widowed father (Lloyd La Cour) and his elder sister (Barbara Tasker), who’ve fallen into their settled ways, are resigned to the loss, but Peter intends to dispute the terms of the deal. Jenkins (extending a cinematic tradition that enfolds such Hollywood films as Jacques Tourneur’s “Stars in My Crown” and Otto Preminger’s “Hurry Sundown”) depicts the inextricable bonds between racist oppression and the economic subjugation of black Americans—and, here, he does so without reference to white saviors or even sympathizers. The drama of “Cane River” is embodied in the concept of independence—here, specifically that of African-Americans, and of women—which is inseparable from a confrontation with, and an overcoming of, the burdens of personal and collective history.

“Cane River,” for all its plain-spoken gracefulness, is a drama of the word made into image—of bodies and landscapes, houses and cities, rivers and roads given a new dimension of existence by way of active thought, spoken in intricately confrontational dialogue, written in a notebook, read from a scholarly tome, even slipped on a scrap of paper into a waiting hand. It’s filled with the constraining power of the past—of family tribulations, local traditions, exhausting memories of pain, and blindly borne and unexamined identities—and the frozen resignation and benumbed passivity that it instills like an inner permafrost. It’s a drama of remaking the present by reclaiming the past—not by bypassing or dismissing it but by revealing its silent presence and bringing it to the fore, as if with artistic X-rays, and by reimagining a personal past in the light of political and social history. In its modest, forthright warmth, “Cane River” is a work of visionary artistry and progressive imagination.

Iran Takes Steps to Create Bank for Transactions With EU –...