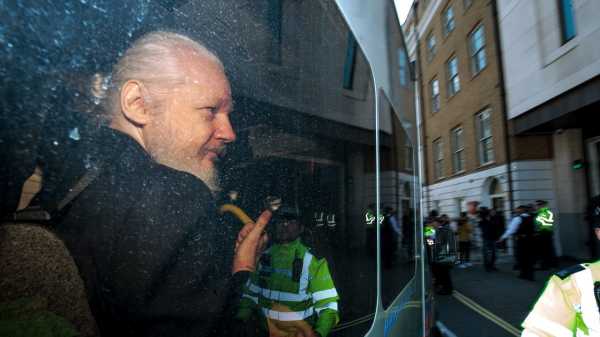 After seven years spent holed up in the Ecuadorian Embassy in London, Julian Assange was arrested by U.K. authorities on Thursday, on charges of failing to surrender to the courts and also on a U.S. extradition warrant. Footage of the arrest was dramatic, like something out of a John le Carré novel: a cloudy morning, a quiet London street with a red postbox on the corner, a struggling man dragged bodily into a police van as he shouted about the unlawfulness of what was happening.

When the footage circulated on social media and news outlets around the world, much of the immediate commentary centered on Assange’s evident physical decline. He was described as “haggard,” “dazed,” “disheveled,” and “frail-looking.” While a focus on his appearance may have seemed trivial, given the wider issues at stake, it wasn’t necessarily unusual or out of keeping, since Assange’s style choices—the leather biker jackets, the severe part given to his prematurely gray hair—have always been a statement of one kind or another. Before his retreat to the Ecuadorian Embassy, and throughout much of the seven years he spent inside it, he exuded a faintly paint-by-numbers “edginess,” a hacker-hipster straight out of central casting with a rotating selection of complicated-looking jackets.

While the grainy video of his arrest did not allow for much analysis of the clothes that Assange was wearing, the book in his hand sent a message that was clearly legible. He was carrying, face up, a copy of Gore Vidal’s “History of the National Security State.” The book was published in 2014, two years after Vidal’s death, and consists of a transcribed discussion between Vidal and Paul Jay, the editor of the Real News Network, a nonprofit news organization. Per the back cover, it concerns “the historical events that led to the establishment of the massive military-industrial-security complex and the political culture that gave us ‘The Imperial Presidency.’ ” The back cover also features a quote from Vidal: “I think everybody should take a sober look at the world about us, remember that practically everything you’re told about other countries is untrue.”

As I watched Assange, I thought about another widely circulated image of a man on his way to the police station with a book in his hand: the photograph, taken in February, 2018, of Harvey Weinstein turning himself in to the authorities and carrying three books under his arm. The title of one of the books was unidentifiable, but the other two were clear. One was Todd S. Purdum’s “Something Wonderful: Rodgers and Hammerstein’s Broadway Revolution,” and the other was Richard Schickel’s “Elia Kazan: A Biography.” What was Weinstein trying to imply? Opinions varied, but it seemed that he was conveying something along the following lines: I am a showman and a throwback to Hollywood’s Golden Age. I am one of a dying breed, a larger-than-life man whose eccentric behaviors are a constitutive feature of this colorful industry. Like Elia Kazan, I am not without my considerable faults, but, like Kazan, my contributions to the culture are such that I will ultimately be exonerated by the likes of Martin Scorsese.

Assange’s choice of text required far less interpretative legwork, at least at first. There is no mystery about why he would brandish a book about the annihilating dangers of the security state, written by a man who, in 2004, said, “The United States is not a normal country. We are under—we’re a homeland now, under military surveillance and military control.” On the surface, the message is very straightforward, but acts of interpretation don’t really stand still, and other questions soon arose. There are hundreds of books about the establishment and maintenance of the military-industrial complex and about imperialist states securing legitimacy by invoking imaginary existential threats. Vidal’s is not the best-known, nor the most well-received. Assange could have been carrying Noam Chomsky and Edward S. Herman’s “Manufacturing Consent,” or J. M. Coetzee’s “Waiting for the Barbarians.” Is there some coded message? Another twist in the plot?

Assange and Weinstein are, of course, not the only prominent figures to use a book as a prop that says a great deal in a very short space of time. Cherished historical examples include Marilyn Monroe and “Ulysses” (message: My astounding beauty occasionally obscures my ferocious intelligence, but it should not); Britney Spears and various Danielle Steele novels (I am an approachable and sensual woman); Britney Spears and “Candide” (I contain multitudes), Lindsay Lohan and the Quran (I am protractedly and publicly toying with the idea of converting to Islam); Liz Hurley and Dick Francis (I am a fun-loving legend); Justin Bieber and a book about Christian marriage (I am a Christian who just got married); Paris Hilton and “The Power of Now” (I am working on it); and, most recently, Bella and Gigi Hadid, with Stephen King’s “The Outsider” and Camus’s “The Stranger.” The jury is still out on the meaning of those last two, with a number of commentators ungenerously attributing the intended message to be something like I can read and I love it.

These book choices are a little message in a bottle, an Easter egg for the discerning viewer, a request to be understood and reconsidered. Whether the public accepts that invitation is another matter. Watching Assange with that book in his hand, I wondered what story he imagined he was telling and how he was feeling as it spun right out of his control.

The White House met with House Democrats about the shutdown. Nancy...

The Latest: Judge to rule later on ‘troll storm’ lawsuit