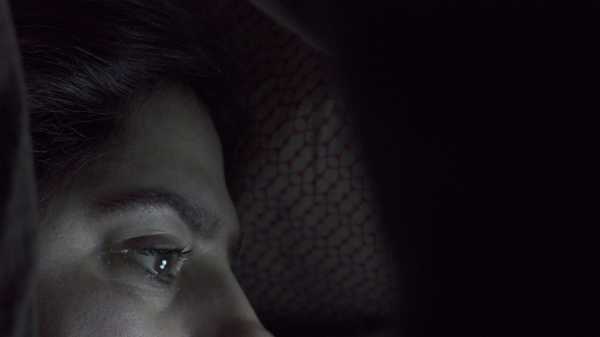 The distribution of world cinema in the United States is better now than it has been in a long time, maybe better than ever. But it’s far from perfect, and many fine films are never released here. One of them is Sara Fattahi’s 2016 documentary, “Coma,” a film that she made in her home town of Damascus, Syria, with members of her family, in the midst of the war. Now Fattahi, who is living in Vienna, has made another film, “Chaos,” which premièred, in August, at the Locarno Film Festival (and won a prize there), but which, astonishingly and dismayingly, has no American screening or release scheduled.

With images, near the beginning of “Chaos,” of a silent, still woman at a window accompanied by a voice-over of her talking about the time when she knew that people near her were being killed, Fattahi faces the participants’ efforts to find a voice with which to speak the unspeakable. With the next image, a closeup of the same woman, with the camera’s aperture opening and closing—as if Fattahi were struggling to find a proper exposure—until the frame goes dark, the filmmaker confronts her own uncertainty about how to film the unfilmable.

Too many recent documentaries feel like push-button filmmaking, where filmmakers push the buttons on their cameras and also those on the participants, who seem to disgorge their reflections and experiences on cue. Fattahi’s film is drastically, essentially different: it’s composed of elements that reflect back on the process of making the film, of questioning her own procedure even as she relentlessly presses ahead in its creation, as if fulfilling—calmly, coolly, methodically—both a terrifying duty and a furious inner need.

For that matter, the disjunction between the calm in which “Chaos” was made and the urgency that it embodies is part of the movie’s effect. Fattahi shows fragments of her own life in Vienna—in the kitchen, in the courtyard, in the street—where she undertakes the exposure of the Syrian war’s machinery of death. The film’s participants, Raja and Heba (which is how they’re identified in the credits), are living with death and summoning the strength to speak of the presence of that destruction in the apparent order of their new daily lives—even as the war continues.

The calm is only apparent. In their efforts to speak, Heba and Raja give stifled voice to their despair. Their acts of memory are also reënactments of loss, and the poisoning of memory by war is also a shattering of their very identity. Raja is possessed with a rage against her son’s killer that seems to wrench her apart, even as she speaks with poised precision. Fattahi films Raja’s hand emerging sculpturally from the room’s sepulchral shadows—the hand with which she mimes the gesture of an official who, with his “ugly hand,” offers to shake hers while bringing the news of her son’s death (and who, she believes, killed her son himself). Heba, an artist, working on drawings and collages, discusses the disappearance of her teen-age brother, the specifics of his murder, and, while in exile in Sweden, the onset of her bipolar disorder, which led to her hospitalization and which she attributes entirely to the war.

There’s also an actress in the film, Jaschka Lämmert, who mainly wanders through Vienna and, in her rounds, reflects its daily life and cultural environment. With the actress’s presence (which reminds me of the presence of the actress Zhao Tao in Jia Zhangke’s 2010 documentary “I Wish I Knew”), Fattahi sets the movie into the context of the history of art, showing her walking through a museum and stopping before Caravaggio’s “David with the Head of Goliath,” a painting of a political murder. Through the Lämmert’s presence, Fattahi also introduces audio clips of an interview, from 1971, with the Austrian writer Ingeborg Bachmann, whose statement of artistic principle and purpose—joined to images of Fattahi, at home, attempting to call her own mother—portrays the filmmaker’s own ambition:

In “Chaos,” as in “Coma,” Fattahi’s depictions are radically different from those of society’s familiar documentary habits. Her subject is one of the pressing subjects of contemporary life: the refugees of war who seek to make new lives in countries at peace, and the countries where many residents, and many officials, don’t want them. With images that are both intimate and elusive, discussions that are both confessional and fragmentary, gestures that are both banal and weighty, she approaches life as a torment and testimony of history, and of cinema as the desperate and urgent recovery of those lives as they slip away in real time. With “Coma,” Fattahi made the only film I have ever seen that reflected the heritage of the art of Chantal Akerman. With “Chaos,” Fattahi extends that heritage, those reflections, still further.

The Open Secret of Thanksgiving, and a Recipe |

A leading Holocaust historian just seriously compared the US to Nazi...