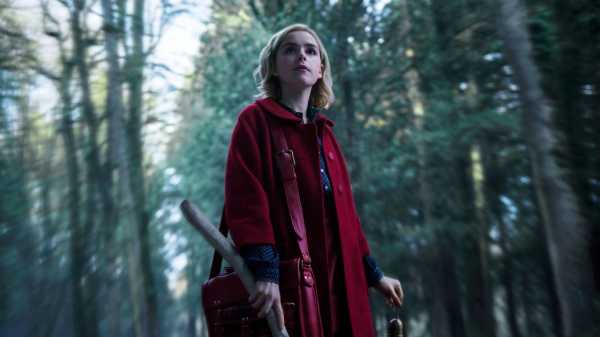 After the success of the CW’s darkly absurd “Riverdale”—on a recent episode, cheerleader Veronica rooted for Archie’s team at the Leopold and Loeb Juvenile Detention Center—we now have another stylish and sinister take on the “Archie” universe, “Chilling Adventures of Sabrina,” on Netflix. Here, in a televisual realm in which teens say things like “You’re talking necromancy, right? What time?” Kiernan Shipka, late of “Mad Men,” faces challenges even more harrowing than being Don and Betty Draper’s daughter. Shipka plays our old friend the teen-age witch, of Riverdale’s neighboring Greendale, where “it always feels like Halloween,” she says. In the pilot, Sabrina turns sixteen and endures something called a Dark Baptism. So do we. For fans of “Riverdale,” her chilling adventures might be a thrill a minute; for loyalists of earlier Sabrina incarnations, they are merely one more sign that the world is officially off its rocker.

Since Archie’s first appearance, in Pep Comics, in 1941, he, Sabrina, and the gang have lived lives of amiable teen-dom, enjoying benign adventures in a clean-line suburbia. When I was a kid, I devoured “Archie” and “Sabrina” comics, though they weren’t funny, exactly. They created a mild impression of fun, like “Bazooka Joe” or “Hi and Lois.” (Until recent decades, they were also very white; I was unnerved to discover, on a visit to the Library of Congress, that an old “Archie” tag line was “THE MIRTH OF A NATION!”) Much of their appeal was in the drawing, and in the exoticism of the bygone Americana that they evoked. Jughead, known mainly for his asexuality and love of junk food, wore a whoopee cap—a fashion trend that can be seen on a 1929 New Yorker cover; Archie’s “jalopy”—baffling in the seventies, incomprehensible now—is an ancient Duesenberg-looking thing with a rumble seat and running boards; Veronica’s wealth is Rockefeller-like, involving mansions and butlers; Sabrina rides a broom. The comics didn’t always seem to understand kids, or to have our best interests at heart. The ads tried to sell us shady products: X-Ray specs, Sea Monkeys, Charles Atlas’s dynamic-tension program. And though they had a significantly female readership, their story lines could be sexist: Betty and Veronica eternally compete over Archie, and shallow Veronica usually wins.

Two shows improved on the comic books: the danceably fab 1970 cartoon “Josie and the Pussycats” and Nell Scovell’s terrific “Sabrina the Teenage Witch,” from the nineties, starring Melissa Joan Hart. “Sabrina” was a Friday-night staple for millions of tweens and at least two beer-swilling twentysomethings, my roommate and I, who enjoyed it devotedly, with Miller Lite and garlic pizza. It was innocent yet happily weird, with a variety of comedic talents—Paul Feig as Sabrina’s science teacher, Caroline Rhea as an aunt, Nick Bakay as the wry, middle-aged voice of Sabrina’s cat, Salem, an animatronic model that looked like moving taxidermy. “Sabrina the Teenage Witch” had cleverness and heart, and may be the only “Archie” product that achieved genuine humor.

Which brings us to the gritty reboots. I was flummoxed by the “Riverdale” phenomenon, and ignored it until “Chilling Adventures of Sabrina” came along, at which point I decided to investigate. I went whole hog: some thirty-seven hours of “Riverdale,” ten hour-long “Chilling Adventures,” a refresher course on “Sabrina,” and a stack of comic books from my local purveyor, who did not laugh at my choices. Archie Comics, I learned, is now run by Roberto Aguirre-Sacasa; he developed both “Riverdale” and “Chilling Adventures” from the Archie-horror comics he created, beginning with the successful, and disgusting-looking, “Afterlife with Archie,” and including “Jughead: The Hunger” and “Vampironica.”

Aguirre-Sacasa gave the “Archie” realm a fresh point of view, at once glib, glam, heartfelt, and horrifying. In “Riverdale,” everyone is constantly being murdered, but the town’s economy centers on maple syrup. No disrespect to Aguirre-Sacasa, but it seems possible that if a showrunner happened to be a serial killer and an “Archie” obsessive, “Riverdale” would be the result. Co-executive-produced by Greg Berlanti, it combines the aesthetic of “Blue Velvet” with the plot of “Dawson’s Creek”: as the series begins, Miss Grundy is a sexy pedophile, sleeping with Archie. The only thing the show likes as much as gore, abs, Gen X stunt casting, and teen sex-army dance numbers (“Milkshake,” on the roof of the Chok’lit Shoppe) is the coy deployment of Archie tropes: Jughead, still wearing his whoopee cap, has become a moody writer; Moose, still wearing his varsity jacket, is now attracted to men. I was wistful about the lack of a jalopy—they can’t possibly work a jalopy into this, I thought—until, late in Season 2, Archie leads his dad, Luke Perry, into their garage, and whips a dustcloth off something that resembles a Model T. “She needs a lot of work,” he says. Luke Perry tears up, and the “90210” theme plays in my head.

Unlike the comic books, the show takes teens seriously—their passions, friendships, and frustrations are intense and fully felt—but everybody is so busy trying to avoid being brutally slaughtered that it’s hard to devote much time to affairs of the heart. To get my bearings, I talked to an expert: my thirteen-year-old cousin, Elle. As I suspected, she and her fellow “Riverdale”-devotee friends have no prior knowledge of “Archie” and are more interested in, say, Betty and Jughead’s romance (!) than in serial assassinations. What they will think of the cheerfully satanic “Chilling Adventures” remains to be seen.

“Chilling Adventures” begins each episode with a comics-inspired sequence, which features jagged fonts, eerie, propulsive music, and illustrations of witches, ravens, skulls, and the like; it’s long and entertaining, and should probably get a development deal of its own. As our tale begins, we zoom in on Sabrina and friends at an old-timey movie theatre, enjoying “Night of the Living Dead.” It’s almost Sabrina’s sixteenth birthday, which is when she will have to choose between “the witch world of her family and the human world of her friends.” She lives with her aunts, Hilda and Zelda, and her cousin, Ambrose, in an imposing gabled manse that’s also a mortuary, where they occasionally harvest things from corpses. Her adorable human boyfriend, Harvey, has no idea that she’s supposed to pledge her allegiance to the Dark Lord, signing the Book of the Beast with her own blood during a freaky ritual in the woods. Worse, she’s expected to change schools. Worse still, she might have to do it before she sets up an intersectional club called WICCA, to stand up for her nonbinary friend Susie. Later, at a pumpkin patch with Harvey, she takes a bite of a malum malus—an evil apple—and has a vision of witches hanging from a tree. What a week!

This is only a fraction of the plot of the first episode, and the plot seems to expand exponentially as the series continues, but it does ground us in hamfistedly ooky dialogue at all times. “Succubitches!” Sabrina mutters, after three “Heathers”-inspired bullies put a curse on her. “Penny dreadful for your thoughts, cousin?” Ambrose says. The music, too, errs on the side of pointed muchness. I sat bolt upright during Episode 7, when I heard the unmistakable sound of John Cale’s electric viola: this teen drama was playing “Venus in Furs,” to accompany a scene that would make the Velvet Underground recoil. “Chilling Adventures” hurls everything it can into its narrative cauldron, including a cave like a Hellmouth and a prep school like a satanic Hogwarts, replete with cloven hooves and pentagrams. (Interestingly, Aguirre-Sacasa went to Georgetown Prep.)

Like “Riverdale,” “Chilling Adventures” is populated with appealing, complex teens, well acted and ably written, who are smothered in genre: in this case, lace collars, gables, and goat’s blood. Sabrina’s choice between worlds becomes an operatic drama, and recalls “Harry Potter” structurally, too—not only does she have dead parents, and magical peers who spit that she’s a “half-breed,” but a mighty weight that rests on her shoulders. The series encourages our suspicion that Sabrina is more important to the Mephistophelian realm than she understands, which explains everybody’s jockeying for her soul. This is perhaps a more narcissistic world view than is necessary, and it does not make the series more interesting.

I binged “Riverdale” and “Chilling Adventures” while surrounded by “Archie” and “Sabrina” comics, which had so many cereal ads that I ended up getting Captain Crunch delivered to my house. Watching, I was often caught in a strange purgatory of being bored by the darkness of the shows and by the dopiness of the comic books; only the cereal was giving me any pleasure, but eating it made me hate myself. I didn’t feel better until I returned to “Sabrina the Teenage Witch.” In the show’s first episode, Sabrina accidentally turns the most popular girl in school into a pineapple, then turns to her wise aunts for help. “I can fix this,” Hilda says, picking up a knife. “Chunks or rings?” Reader, I laughed. It’s good seeing Sabrina have a little fun with her magic, without having to worry so much about Satan.

Over 40 Skeletons With ‘Hands Tied Behind Their Backs’ Reportedly Unearthed...