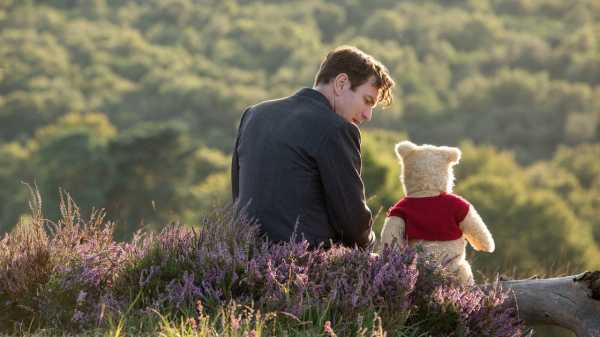 The first script of Disney’s new movie “Christopher Robin” was written by Alex Ross Perry, one of today’s most distinctive young independent filmmakers. (His most recent film, “Golden Exits,” premièred at Sundance, in 2017, and was released earlier this year.) Perry’s films are marked by characters facing humiliation with aggression and self-scourging; they’re often sharply funny but are always streaked with pain and frustration. It’s not clear how much of Perry’s work is present in the final version of “Christopher Robin”—the story is credited to Greg Brooker and Mark Steven Johnson, and the screenplay to Perry, Tom McCarthy, and Allison Schroeder. Disney was taking few chances, and hedged even more by choosing Marc Forster to direct. Nonetheless, there’s an unusually, and refreshingly, abrasive aspect to “Christopher Robin” that raises it above the usual run of children’s movies, and it’s matched by the abraded surfaces that the movie presents onscreen.

The action starts with young Christopher Robin (Orton O’Brien), whose adventures in the Hundred Acre Wood are about to come to an end. He’ll soon leave for boarding school, and he’s enjoying a sentimental farewell lunch with Pooh (voiced by Jim Cummings) and the other fantastic animals. His coming-of-age, or, rather, his forced march into a maturity that he didn’t seek, is marked by the very appearance of the animals. The movie is a blend of live action and C.G.I., and the creatures, far from the familiarly abstracted and colorful drawings, look like living stuffed animals that have been used and worn out; they’re shaggy, scruffy, faded, and threadbare, with the backing and the seams showing through their washed-out and nearly colorless fur. Leaving these living toys is like leaving the frivolous things of childhood behind, and Christopher is soon pushed far from them—he meets and marries a woman named Evelyn (Hayley Atwell), they have a child, Christopher goes off to fight in the Second World War, and then he returns home wounded.

Most of the movie is set in postwar London and is the story of a midlife crisis. The grown-up Christopher (Ewan McGregor) is an efficiency expert in London at a luggage company that’s in financial crisis. He's already something of a workaholic, whose long hours strain his relationship with Evelyn and with his daughter, Madeline (Bronte Carmichael), who seems to be about ten or eleven years old, but then he’s forced by his boss, Giles Winslow (Mark Gatiss), to work through a weekend that he’d planned to spend with his family at their country cottage, in Sussex. The grimly determined Christopher (whose cost-cutting assignment is meant to save the jobs of his colleagues) pushes ahead alone, driven further into annoyance by his nosy and importunate neighbor, Cecil (Paul Chahidi). Meanwhile, Pooh suddenly finds himself alone, too; he can’t find his friends in the Hundred Acre Wood, and he passes through his tree and comes out the other side in London—in fact, in a garden outside the Robin-family home, where he and Christopher meet again.

But Christopher is none too happy to see him; a quick surge of sentiment is instantly balanced by frazzled irritation. Brought into the Robin house, Pooh quickly wreaks havoc, and Christopher decides that the easiest way to get rid of Pooh is to take him back to the Hundred Acre Wood. There ensues a train trip, in which Pooh innocently mocks Christopher’s earnestness, labors, and lack of childlike pleasure, and a return to the country, where Christopher ultimately loses patience with Pooh and vents his anger. The movie then trudges through two acts of reconciliation: first, between Christopher and Pooh (along with the other animals), and then between Christopher and Evelyn and, above all, Madeline, who, against her wishes, is about to be sent off to boarding school—and who proves to be quite the intrepid adventurer herself. The story’s overarching theme, of course, is Christopher’s recovery of the joy, wonder, and freedom that inspired his childhood.

It would be disingenuous to say that the movie’s specifics of plot are entirely foreseeable, but the film’s twists and turns fit within a narrow path that leads toward its built-in destination with an inevitable obviousness. Nonetheless, “Christopher Robin” offers the pleasures of its eccentric textures—both the (synthetically) visual ones of the animals and the dramatic ones of some chattery and spiky dialogue that spices the smoothed-out action like cloves stuck in an apple. Pooh’s eternally youthful, impulsive enthusiasm gives rise to some blithe comedy (as well as a perky homage to “The Red Balloon”), as when he asks Christopher, about a train-station ticket clerk, “Why is he in a cage?,” or when Pooh suddenly starts blurting out the words for objects that he sees through a train window.

The secret star of “Christopher Robin,” however, is Eeyore (voiced by Brad Garrett), who, with his sour and cynical asides (“Looks like a disaster; why wasn’t I invited?”), does more than steal the show—he undergirds the action with his heightened sense of doom. The movie’s overarching vision of a return to childhood is about free time and musing—Pooh’s mantra is “Doing nothing often leads to the very best something”—and Eeyore’s dyspeptic sideline carping, his essential negativity, is as much a part of doing nothing as is cheerful and giddy play. (It’s also as much fun.) The familiarly dour donkey is more than a critic; he’s a self-critic. I have no idea whether Eeyore’s dialogue is Perry’s work or that of another writer, but there is an unmistakable resemblance between the donkey and some of Perry’s prime characters. (I’d be curious to know what Perry’s script was like before undergoing rounds of rewrites by Schroeder and McCarthy.)

The movie’s historical context (including a sharp reference to Britain’s endurance of the deadly German bombing campaign) and portrayal of postwar economic hardship lend the action a noteworthy series of talking points that can only be salutary for children whose parents (and even grandparents) were likely too young to remember the Second World War. But the brightest point of political light comes late in the action, and is too central to the dénouement to spoil. Suffice it to say that Christopher offers, in microcosm, a vast political lesson in macroeconomics that was matched by actual and epochal trends in European (and, for that matter, American) postwar society—and that, today, remains a lesson in need of repetition.

Congress is on the verge of a bipartisan opioid package. But...

Trump claims California officials admitted he was “right” about wildfires. That...