Home Culture “Coco” Is the Definitive Movie for This Moment | 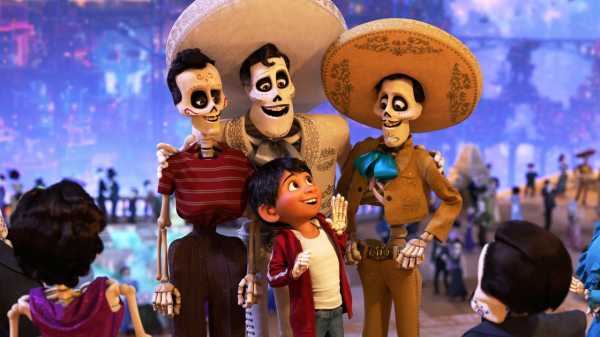 One weekend last fall, my boyfriend, Andrew, whose favorite movies include “Deliverance” and the original “Texas Chain Saw Massacre,” went off to go see the Pixar movie “Coco,” by himself, and came back in a delirium of happy, wistful tears. “What’s going on with you?” I asked, watching him wheel his bike back into the living room. I hadn’t moved from my permanent station behind my computer monitor, a hub for the ongoing erosion of my belief in human good. “You have go to see ‘Coco,’ ” he croaked. “You have to. It’s, like, the best movie of all time.”

I assumed that he was being hyperbolic, until a night in April when I invited three friends over to watch “Coco,” all of us first-time viewers with high expectations. People we knew—people in their twenties and thirties, few of them with children—had been freaking out about “Coco” in group texts and random conversations, saying things like, “I cried so hard I started choking,” and “I’ve watched it five times this month on airplanes.” “Hey ppl over here getting drunk and watching Coco just fyi,” I texted Andrew, who was still at the office. In return, I received a series of panicked instructions to not start without him. “You have already seen it….” I texted. “I DON’T CARE!!!!!!!” he texted back. “DON’T START WITHOUT ME!!!!”

We started without him. Andrew came home a third of the way into the movie, cracked a beer, and silently sat down on the floor of the living room to watch. By the end, every one of us was crying through a manic grin. “I told you,” he said. “It’s the best movie of all time.”

In the weeks since that viewing, “Coco” love has continued to spread among my demographic—thanks, in part, to the movie’s release on Netflix in May. “Coco” is unlike any film I can think of: it presents death as a life-affirming inevitability; its story line about grudges and abandonment makes you feel less alone. The protagonist, Miguel, is a twelve-year-old boy in the fictional Mexican town of Santa Cecilia—named for the patron saint of musicians—and he is trying to get out from under the shadow of his great-great-grandfather, who left his family to pursue a career as a musician. His wife, the ferocious Mamá Imelda, was left to take care of their young daughter, Coco. She instituted a permanent household ban on music and started making shoes.

We meet Coco as an old woman. Her daughter, Miguel’s grandmother, now runs the family and its shoemaking business with an iron chancla. Earnest, sweet Miguel teaches himself to play the guitar in the attic, watching and re-watching tapes of the bygone star Ernesto de la Cruz. On the Day of the Dead, he accidentally shatters a framed photograph on the family ofrenda, then spots a hidden detail in the picture, one that makes him suspect that his wayward ancestor was in fact de la Cruz himself. He sprints to the town mausoleum, hoping to borrow de la Cruz’s guitar and prove the value of music to his family. Instead, the guitar turns Miguel invisible, and whisks him across a skybridge covered in thick, soft marigold petals that glow like lava. He falls to his knees in the petals, and then looks up to see a grand floating metropolis, confetti-colored in the darkness: the Land of the Dead.

The second and third acts of the movie are mostly set in this city of jubilant sugar-skull skeletons, where you exist only as long as you are remembered by the living. (You can cross over to the living world on the Day of the Dead, but only if your photo is on display.) Miguel joins up with a raggedy show-biz hustler named Héctor, who’s desperate to get his picture back up on an ofrenda, and who says he can bring Miguel to de la Cruz. Héctor lives in a waterfront shantytown filled with people who are about to be forgotten; at one point, he begs a guitar for Miguel off an ill-tempered cowboy named Chicharrón, who vanishes as soon as Héctor finishes singing an old dirty song.

Our staff and contributors share their latest enthusiasms in books, music, podcasts, movies, TV, and more.

Eventually, Miguel realizes that Héctor is his real ancestor, and the movie sprints to a conclusion that’s as skillfully engineered to produce waterworks as the montage at the beginning of “Up.” But until the end, “Coco” is mostly, wonderfully, a mess of conflict and disappointment and sadness. Héctor seems to have failed everyone who takes a chance on him. Miguel’s face, painted in skeleton camouflage, often droops as if he were a sad little black-and-white dog. “Coco” is animated by sweetness, but this sweetness is subterranean, bursting through mostly in tiny details: the way that both Mamá Imelda and Miguel’s grandmother brandish shoes when they’re angry; or how the daffy Xolo dog that accompanies Miguel on his adventure is named Dante; or how the skeletons return to their city through the Day of the Dead’s efficient T.S.A. system, declaring the churros and beer that their families gave them for their journey home.

Before “Coco” hit theaters, it was easy to doubt that the movie would present Mexican culture as expansively and gorgeously as it does, with such natural familiarity and respect. It is Pixar’s nineteenth movie, but their first with a nonwhite protagonist; Lee Unkrich, the director and creator of the initial story, is white. The movie’s working title was “Día de los Muertos,” and, in 2013, Disney lawyers tried, absurdly, to trademark that phrase. But Unkrich and his team approached their subject with openness and collaborative humility: they travelled to Mexico, they loosened Pixar’s typical secrecy to build a large network of consultants, and, after the trademark controversy, they asked several prominent critics to come onboard. “Coco” is the first movie to have both an all-Latino cast and a nine-figure budget. It grossed more than eight hundred million dollars worldwide, won two Oscars, and became the biggest blockbuster in Mexican history.

“Coco” is also a definitive movie for this moment: an image of all the things that we aren’t, an exploration of values that feel increasingly difficult to practice in the actual world. It’s a story of a multigenerational matriarchy, rooted in the past—whereas real life, these days, feels like an atemporal, structureless nightmare ruled by men. It’s about lineage and continuity at a time when each morning makes me feel like my brain is being wiped and battered by new flashes of cruelty, as though history is being forgotten and only the worst parts rewritten. It feels like myth or science fiction to imagine that our great-great-grandchildren will remember us. If we continue to treat our resources the way we are treating them currently, those kids—if they exist at all—will live in a world that is ravaged, punishing, artificial, and hard.

This world is hard enough already: its technological conditions induce emotional alienation, and its economic ones narrow our attention to questions of individual survival. As it is, I haven’t assembled the ofrenda I ought to. I barely feel like I’m taking adequate care of the people I love right now, and I mean the ones I know personally. I feel certain that I’m failing the people I don’t know but that I love nonetheless—the people in our national community, and the people who are seeking to become a part of it.

“Coco” is a movie about borders more than anything—the beauty in their porousness, the absolute pain produced when a border locks you away from your family. The conflict in the story comes from not being able to cross over; the resolution is that love pulls you through to the other side. The thesis of the movie is that families belong together. I watched it again this week, reading the news that Donald Trump is considering building an unregulated holding camp for migrant children, that ICE showed up on the lawn of a legal permanent resident and initiated deportation procedures, that a four-month-old baby was torn away from her breastfeeding mother. If justice is what love looks like in public, then love has started to seem like the stuff of children’s movies, or maybe the stuff of this children’s movie—something that doesn’t make sense in the adult world, but should.

Munster and Leinster make 12 changes each for Thomond Park clash

Clive James Got It Right |