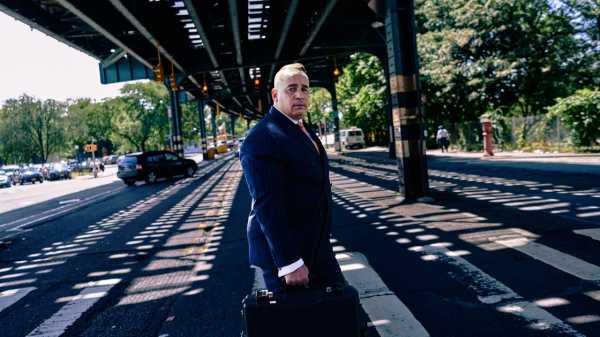 A private investigator named Manuel Gomez is the central character in the first season of Gimlet Media’s new investigative podcast series, “Conviction,” about criminal justice in the Bronx, which was released in its entirety this month. Gomez, a former police officer, sees himself as a kind of Robin Hood of justice, and when we meet him two things are clear. First, he’s a character, in the hoo-boy sense of the word—entertaining, colorful, eager for attention and control. “Is this guy kiddin’ me? You breakin’ my balls or what?” he says, when the host, Saki Knafo, asks Gomez to introduce himself—he protests that he and Knafo already know each other. Second, he’s a little exhausting. When Knafo asks Gomez to tell us what he does, he replies, with breezy pride, “I hunt down bad guys, I prove people innocent, I bring in rapists and murderers and serial killers.” He says this in a slightly canned way, as if he’s said it many times before. Knafo prods him a bit—this podcast isn’t about serial killers. “I see myself as a punisher for the wicked,” Gomez continues. “I see myself as a bringer of justice for the good. I protect the weak.” We begin the series knowing that its lead helps “the good” and “the weak”—and that he has a bit of a messiah complex about it. It’s an opening that says something about our justice system, and also about podcasts.

Gomez is what journalists call a good talker: a highly quotable subject, and therefore an irresistible one. (Especially, I imagine, to audio journalists.) As a private investigator, Gomez often works with young people of color from poor neighborhoods who get swept up in a web of draconian arrests, plea deals, sentencing, and incarceration. New York is one of four states with a blindfold law, which means that only the most basic information about the prosecution’s evidence is shared with the defense; Gomez doggedly seeks missing information and also becomes an advocate for defendants and their families, sometimes to the point of meddling, or complicating. He can be endearing—at one point, describing doing some research, he says, “You know the ‘Ghostbusters’ library, on Forty-second Street?”—but he’s a protagonist who we don’t instinctively trust, because he can be as self-aggrandizing as he is altruistic. That tension is central to “Conviction,” which traces the story of Gomez’s role in a contentious, high-profile case in the Bronx, that of a young man named Pedro Hernandez, whose story, after Gomez took his case, in 2016, became a cause célèbre for bail reform.

As a sixteen-year-old, in one of the most highly policed neighborhoods in the country, Hernandez was charged in connection with a shooting that took place—several months earlier—during a street fight between rival groups of kids. Though Hernandez said he was not involved, and though his lawyer pointed out that his client had been arrested several times before, on charges that were later dropped, the judge set his bail at a quarter of a million dollars and sent him to Rikers, where he remained for more than a year, awaiting trial. We hear from Pedro’s mother, Jessica Perez, a committed and compelling advocate for her son’s case; from neighborhood teens who tell emotional, detailed stories about police harassment; from a neighborhood woman who won a settlement from the city for ending up in jail after she went to the police station to ask about her son’s arrest. The series’ great strength, which is considerable, is in such tape, and in the presentation of it. (The show was produced by Meg Driscoll, Chris Neary, and Saidu Tejan-Thomas.) It outlines particular problems and zooms in to show us the lives of the people involved, and then does the same from opposing perspectives, with similar results.

The chief focus of our ratcheting sympathies is David Terrell, a zealous N.Y.P.D. detective who was working in the Forty-second Precinct, in Hernandez’s neighborhood. Terrell stands out for the high number of arrests he’s made and for the number of complaints that civilians have filed about him. In Hernandez’s case, a key witness claimed that Terrell coerced him to lie about seeing Hernandez commit the crime. (Terrell denies personal involvement with the witness; his lawyer has said that the witness’s claims were false.) When we first hear Terrell talk, though, in Episode 3, it’s hard not to like him. Terrell, who is black, grew up mainly in Bedford-Stuyvesant, where he and his peers felt terrorized by a tough cop who they nicknamed Rambo; Terrell believed that the police treated black people unfairly. His natural, unguarded manner, his thoughtfulness, and his evident caring might surprise us after the previous episode, in which heartfelt interviews lead us to believe that he’s a bully, a menace, a sleaze. Hearing him, we can’t quite believe that he’s a monster. Then he accuses Hernandez of being vicious, a gang member targeting justice-seeking cops who were about to take the gang down. Now we don’t know what to think.

Into this thicket saunters Manny Gomez, in a double-breasted suit. Knafo, who reported the story for two years (an accompanying piece for the Times Magazine ran in January), makes uncertainty about Gomez and his methods central to the narrative of “Conviction.” Hernandez’s story, and stories like it, may seem to cry out for a savior, and Gomez, who does seem to care about his clients, is all too eager to fill the role. (Other outside actors, including the Robert F. Kennedy Human Rights organization and the activist Shaun King, also play parts in Hernandez’s story.) Knafo indicates that Gomez seems to be caught up in a romantic narrative of his own imagining, or several—motifs that the series somewhat tepidly incorporates, for art’s sake. One of these is the detective story. “Manny Gomez, private eye, lives alone in a small apartment in a quiet part of the Bronx,” Knafo says. “He’s got this watch that’s really a camera, and he has a pen that’s really a knife.” Later, less successfully, Knafo invokes noir. “A lot of detective stories start with a blonde,” he says, referring to Hernandez’s mother, Jessica Perez. “Manny’s happens to be one of them.” Another motif is the Icarus story, suggested by Gomez himself, who, startlingly, keeps a painting of Icarus in his apartment to inspire him. Knafo has a subdued presence—he’s an obviously skilled reporter who asks good questions, and he doesn’t foreground himself unnecessarily, which I appreciate. But there’s also something marshmallowy about that presence—a softness in his voice and an evenness in his tone that suggest he could stand to be roused a bit, and which doesn’t help convince us when he goes for something poetic in the narration. The Icarus imagery seemed like a somewhat obvious ploy, if an irresistible one, to elevate the story with metaphor.

Until the end. By the final episodes, I couldn’t tell what “Conviction” was going to be saying about this ever more complex story, and I wasn’t optimistic about the central role of Gomez in delivering that message; I worried that it had taken the spotlight away from the system and its problems. Good talkers, as we well know, can lead us astray, distracting us with humor and verve while sucking all the oxygen out of a room. But, in the final episode, Knafo’s narration about Gomez and his efforts to help his clients came together in a way that nearly stunned me with its power. We hear about how Gomez’s work helps one client’s case and hurts another’s, painfully, and Knafo reminds us that Gomez is a study in grays, not in black and white, like all of us. “While working on this story, I sometimes heard the phrase ‘no angel,’ ” Knafo says. “We’ve all heard it. It’s the phrase that people trot out when cops are accused of shooting someone or violating someone’s rights. The phrase people so often use to talk about young black and Latino men, about kids like Pedro Hernandez. ‘He’s no angel,’ they say, as if only an angel is entitled to a fair trial, entitled to see the evidence that’s going to be used against him . . . As if basic rights are only for angels.” He gets Icarus in there, too, but I’ll let you hear it for yourself.

Are Man City better with Gabriel Jesus instead of Sergio Aguero?

Pilot of US F-15 Fighter Jet That Crashed Into North Sea...