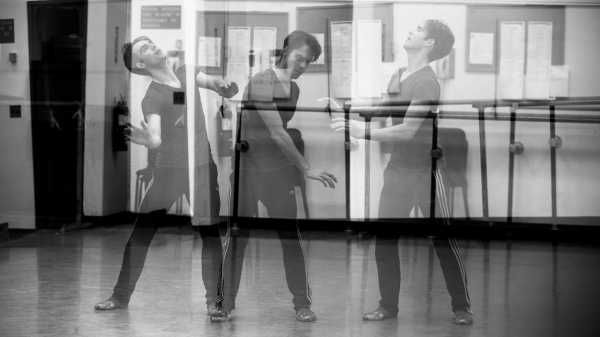 In 1992, when the choreographer Jerome Robbins began to work with the ballet dancer Mikhail Baryshnikov on a collection of solos that would eventually become “A Suite of Dances,” Robbins was going through a dark period in his life. He had just lost his former lover and dear friend, Jesse Gerstein, to AIDS. Leonard Bernstein, his collaborator on “Fancy Free” and “West Side Story,” had died not long before. Robbins was in his mid-seventies and not feeling at the peak of health. He was beginning to wonder whether he had come to the end of the road as a choreographer.

It was Baryshnikov who pushed him back into the studio, offering the ultimate lure: himself. Baryshnikov, or Misha, as he’s universally known, was forty-four, no longer the wunderkind who had electrified the world with his bravura—the stratospheric jumps and the multiple turns he could speed up or slow down with uncanny control, leaving the audience gasping for air. But, as Amanda Vaill puts it in “Somewhere,” her vivid biography of Robbins, “he was still Baryshnikov, and the invitation to use him as an instrument was like offering a Stradivarius to a violinist.”

What Baryshnikov had to offer was his prodigious musicality, his intelligence, and his deep understanding of movement. By then, he had given up classical ballet and was exploring modern dance with his ensemble, the White Oak Dance Project. His dancing had become more relaxed and plainspoken. He was interested mainly in exploration. This made him the ideal partner for a choreographer unsure of what to do next; Baryshnikov became almost an extension of Robbins’s choreographic imagination. They worked on the series of solos for two years, on and off. The final work is like a series of snapshots of that collaboration.

For about sixteen minutes, a cellist is alone onstage with a dancer. She watches the dancer, and he listens. As she—and it’s always a she—raises her bow to begin playing the first of four movements from Bach’s cello suites, he takes his first step, pauses, waits for a few beats, and then takes another. The third step becomes the beginning of a phrase of movement. By the fifth step, his whole body is moving, his arms forming casual arcs. He looks at his hands, as though thinking of what to do next.

When danced well, “Suite” never loses that improvisatory feel; like many of Robbins’s dances, it lies on a knife’s edge between naturalness and an uncomfortable ersatz quality. Its success depends on the dancer’s ability to be in the moment, to find that perfect synthesis of self-knowledge and unself-consciousness. When it happens, the audience feels that it is seeing who that dancer really is, watching him think and react in real time rather than execute well-rehearsed choreography. That’s the trick.

Gonzalo García is the latest New York City Ballet dancer to perform “A Suite of Dances” in New York; he dances it on Saturday, May 4th, and again the following week. Like most dancers who’ve taken it on, he’s not at the beginning of his career, having danced at City Ballet for eleven years and, before that, at San Francisco Ballet for nine. He’s thirty-nine and recently recovered from a serious foot injury that kept him offstage for almost a year. But dancers often have a second blossoming late in their careers, and García seems to be experiencing that now. “I have this desire and this understanding that time is precious now,” he said last week, referring to the past few months.

In the studio last week, he was still refining details; should he stomp the floor here with his heel or slide his foot forward? Should he throw his arms down or place them more carefully? Over the course of an hour’s rehearsal, his T-shirt became drenched with sweat. “Suite” may look easygoing, but it’s not. Most male ballet roles come in bursts of virtuosity, but this is a slow burn, with long, looping phrases that unspool in a continuous stream. “You have to be in such a zone,” García explained. “It’s something very honest and pure. Which is hard to create. You have to have experience, and you have to be vulnerable.”

The rehearsal was led by Jean-Pierre Frohlich, a former dancer with an encyclopedic knowledge of Robbins’s choreography who is now in charge of keeping the Robbins ballets in shape at the company. He kept reminding García of the little details. Some observations were incredibly precise—when to initiate a movement, or the position of the back in a moment of suspension while balancing on one foot, or the height of an arm. A certain walk had to feel “hot, hot, hot,” as if the dancer is walking on coals. García would try different approaches, then stop to think for a moment. Much of the rehearsal was about negotiation between the way Frohlich remembered Robbins’s instructions and what looked most natural on the dancer in front of him.

At about the half-hour point, the cellist, Ann Kim, started to play the slow, melancholy sarabande from Suite No. 5 in C Minor. García listened for a moment, walking around the studio, and then toward Kim, as if lost in his own thoughts. Slowly, he began moving his arms; they seemed to carry the full weight of the

melody in the span between his shoulders and his fingers. This section is all about the arms; they initiate and complete each musical phrase. You can almost see Bach’s thoughts translating into one sweeping shape after another.

“At that point in the solo, you’re already tired,” García told me later. “You’re ready to go home. And then she starts playing. Something happens onstage. You hear the music, and your body is tired, so you’re more relaxed, and everything becomes heavier. You almost forget that there are people there and that you’re performing. And then you finish that solo, and all of a sudden you let go of something or someone and you look at her and you’re like, back to the show.”

The moment is a turning point in the ballet, a switch between the private and the public, between thought and action, death and life. Watching García’s long, heavy arm movements and his rapt expression was like seeing a sleepwalker find his way through the darkness. And then it was time to dance again.

What has gone wrong for on-loan Liverpool forward Divock Origi at...

Eminent domain, the big-government tactic Trump needs to use to build...