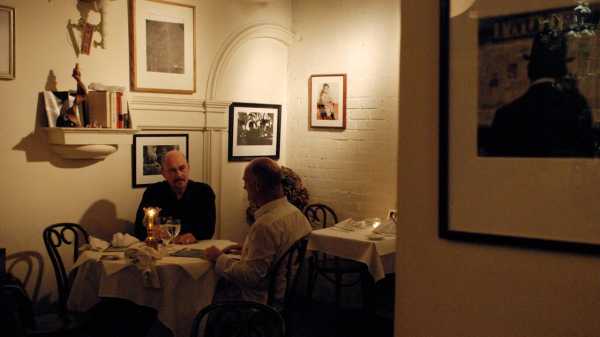 A couple of days ago, word started to spread: someone walking down Thirteenth Street near Sixth Avenue had discovered a “SEIZED” notice on the doors of Café Loup, the beloved bar-café that has quietly played host to generations of New Yorkers. The space has been dark ever since. On Wednesday morning, Eater reported that the restaurant has several hundred thousand dollars in unpaid taxes; it’s not clear yet whether the closure will be permanent. (My phone calls to the restaurant went unanswered.) As the news travelled, R.I.P. messages flooded social media: of disbelief, of sadness. Everyone wants to claim a piece of Café Loup’s history; it was—is?—the sort of place that makes one feel proprietary. “New York really is winding down,” a friend texted me.

In the course of its forty-one-year lifetime, Loup was a Village stalwart, a favorite of the late Christopher Hitchens, the food critic Seymour Britchky, and others in the ever-dwindling print-media scene. Despite its decades of service, it never became an in-joke, like the Upper West Side institution Barney Greengrass, or an exclusive club, like Rao’s, where customers literally own tables, or a glitzy media scene, like the late Elaine’s. It wasn’t one of those venerable spots that made your heart hurt because every visit could be your last. You didn’t feel you needed to keep it “secret,” if you were the sort of person who likes to hoard restaurants, and it didn’t have the obscure, ironic cachet of its neighbor, Spain. It was that much rarer New York luxury: a place that allowed itself to be taken totally and completely for granted.

Long, dim, and varied enough in its layout that repeat customers could have strong table preferences, Loup was a place with serious regulars; neighbors who dined and drank there literally every night, poets and publishers who held down favorite banquettes, older people who were treated with kindness and respect. I know one middle-aged man who had been going there since he was twelve. People got married there. You were greeted with familiarity but not fussed over; you didn’t feel excluded if you’d never been before.

“What qualities, once found, make one think of a bar as in some way one’s own?,” Hitchens wrote in a tribute, in 2001. “At different times, I have wandered in for mid-morning coffee and newspaper while the bar is being set up and the deliveries are taking place, and been the only customer while not being made to feel it. I have had long lunches in the near-deserted bar area, being allowed a big round table for only a few guests. I have dined by candlelight (I took a good friend there the night he’d had all his teeth extracted, because the light was so comfortingly low and sparing) and stayed at the bar until the small hours debating with newly-met fact-checkers from glossy or obscure magazines, or grizzled MittelEuropa exiles.”

It’s been some years now since Loup qualified as a true vestige of any sort of bohemia. But, because of Loup’s location near the New School and the ever-encroaching N.Y.U., and its proximity to several publishing houses (fewer by the year), it continued to attract a bookish crowd; by tacit tradition, everyone repaired there after the National Book Critics Circle Award, which gives a pretty good sense of its place on the international glamour scale. And, because of its location between uptown and downtown, east and west sides, it was as convenient to Carroll Gardens as to Claremont Avenue.

No one went there for the food. It wasn’t dramatically terrible, but, by the time I started going there, at least, everyone knew that the fries were the best thing on the menu. (The burgers and the cassoulet also had their defenders; Hitchens’s regular order of oysters seems, in retrospect, a bold one.) Serious drinkers were well represented, certainly, but a lightweight could nurse a glass of the house white without shame, and the occasional sophisticated child kept things genteel. The drop-ceiling and urinal-cake-perfumed hall to the bathroom were crummy, from an objective point of view, but the sight lines were somehow perfect; you could hide there—it was the sort of place that offered the frisson of unexpected and awkward encounters—and you could read in peace, or mingle as the mood took you.

Any collection of people is marvellous in its way, but how often do you get the chance to learn that? Many of Loup’s servers, bartenders, and runners stayed for decades. They knew our histories and secrets and eccentricities, and we knew theirs. Over the years, I started more than one lasting friendship there. I learned which regulars didn’t tip, and who’d been discreetly eighty-sixed. I had fights with friends and run-ins with exes, and was discovered by acquaintances to be in a secret love affair. And I didn’t even go there that much.

In the past five years, there were changes: one pair of owners divorced; one suffered a tragic accident. After the business changed hands several years ago, some longtime servers left. Sides were taken. In retrospect, maybe we should all have been less shocked that this could happen. I sort of thought I’d become inured to treasured places closing in New York. But this one hurts. I loved Café Loup, not more than anyone else but the way a great number of people did. If it is really gone, where will we meet instead?

German Leaders to Seek Waivers From US Sanctions on Russia –...