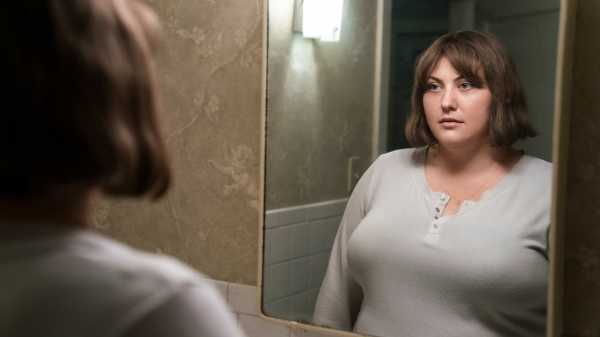 Some animated scenes in “Dietland” (airing Mondays, on AMC) figure its protagonist as a downcast lump. This is not precisely an image of the plus-sized heroine, Plum Kettle—it’s more like a rendering of the woman’s self-loathing self-image. Drained of the charm shown by the actor in the part (Joy Nash), the animated caricature is bloated with the malaise instilled by the makers of modern beauty myths. Every week in the title sequence, this avatar scales a mountain of sweets—a great heap of Candyland topography—dragging herself into slimness as she ascends its sugar-frosted face until, at the summit, she collapses, gaunt and haggard. This morbid sort of comic-strip surrealism bleeds through the new adaptation of Sarai Walker’s satirical novel. Giddy and bleak, the series proceeds as if exhausted by exploitation and misogyny, to the point of delirium.

Early and often, we see an image of the illustrated Plum, who lives in Brooklyn, as she sees herself in the cityscape. She says that she conducts most of her life within a five-block radius, shuttling between her apartment, a café, and her waist-watchers meetings, and we see her conveyed endlessly around a Penrose triangle, cycling through this circumscribed life as if running a Sisyphean hamster wheel. At the coffee shop, she occasionally bakes scones when filling in for a gay best friend who, three episodes in, serves mostly as a handsome plot device. More often, she sits there with her laptop, ghostwriting an advice column for Daisy Chain, a glossy magazine for teen girls.

The sorrows of readers—disordered eating, chaotic thinking, florid inferiority—fill up her in-box, and she responds with glib wisdom attributed to Kitty Montgomery, the editor responsible for Daisy Chain and all the other women’s titles at her company. Broadly played by Julianna Margulies, Kitty is introduced with a letter-writer’s insult that she looks like “skinny wax Dracula,” which is one way to get at the idea that her monstrous enterprise feeds on the life force of the innocent. Plum is too pure to victimize her fellow-woman by abetting this bloodsucking. But she needs the money, not least because she wants to finance a gastric-bypass operation and the skin-removal procedure that her memorable ninny of a weight-loss counsellor states is its necessary accompaniment.

Lured down to the beauty closet of this media company, amid the potions and salves that promise salvation, Plum discovers a woman who is working to sabotage “the dissatisfaction-industrial complex,” as she calls the fashion, cosmetics, and other big businesses of feminine ideals. Believing that Plum’s contact list of advice-column correspondents—fifty thousand disgruntled younglings—is rife with potential recruits to this cause, she solicits Plum for a copy of it. There is a tangential connection between the good witch in the beauty closet and Verena Baptist (Robin Weigert), the apostate daughter of a prominent diet guru. In a further step toward recalibrating her self-improvement plan, Plum takes a meeting with Verena, who leads what is either a benign cult promoting body acceptance or a strange clique advancing shadowy agendas.

Meanwhile, a feminist extremist group—named, simply and wonderfully, Jennifer—has been killing men presumed guilty of sexually assaulting girls. First, Jennifer members drop two soldiers accused of harming a thirteen-year-old from a freeway overpass. Next, they rain the bodies of wrongdoers onto the streets of Manhattan, starting with a Terry Richardson-ish fashion photographer formerly employed by Kitty, who knew what kind of creep he was.

I don’t generally condone the vigilante murder of criminals by hurling them from airplanes onto city sidewalks. In reality, you might squash a dog; in fiction, you might flatten a satirical tone. But on “Dietland”—which was created by Marti Noxon, who honed a style of incisive grotesquerie as a co-creator of “UnREAL”—it’s fairly appealing. The turn of events is both proportionate to the intensity of its cultural critique and appropriate to a narrative propelled by dream sequences, waking nightmares, and lavish hallucinations. Soaps suds and bloodlust mingle effervescently when a police officer explains to Kitty that, in light of the bodies falling from the sky, “the mayor’s declared a state of emergency, and cancelled Fashion Week until further notice.”

A look at the reasons behind West Brom’s disastrous season

Lennon confident Celtic have fended off Arsenal’s interest in Tierney

OxyContin maker Purdue Pharma is being held accountable for the opioid...

Brexit Party Leader Says Denmark, Poland, Italy Could Be Next to...