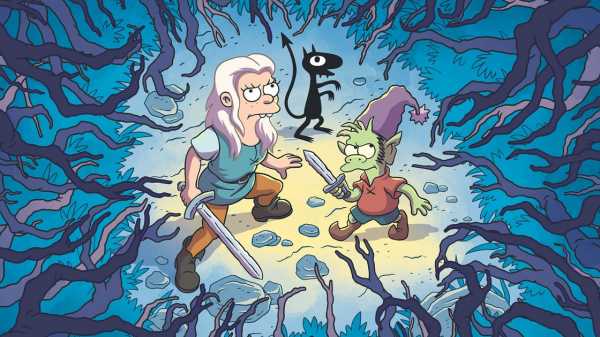 “Futurama,” created by Matt Groening, was a speculative fiction, set amid thirty-first-century technology, with a generous range of good gags and interstellar shenanigans. Each week’s adventure deployed the emblems of “Buck Rogers”–derived space operas in the service of an animated workplace sitcom about laboring through the future. The cryopreserved hero, a twentieth-century pizza guy named Fry, was the lieutenant and love-struck admirer of an interplanetary delivery pilot; his sidekick was a sozzled and cynical robot.

“Disenchantment” (Netflix), developed by Groening and Josh Weinstein, is “Futurama” ’s fantasy analogue, a medievalist tale redrawn as a buddy comedy. Where Fry, goggling at technological progress and dystopian hopelessness, was the likeness of the viewer waking to present-day folly each morning, the protagonist of “Disenchantment,” a princess named Bean, represents a modern sensibility confronting crudeness as practiced in the Middle Ages, or any old time. She’s the drunken cynic.

Bean (voiced by Abbi Jacobson, of “Broad City”) is acting out against her father, King Zøg of Dreamland (John DiMaggio), a vulgar autocrat who grouches like a dyspeptic car-dealership overlord. He plots to marry her off to the inbred heir to another throne. She acts out in alehouse uproars and horse-thieving escapades, as egged on by Luci (Eric Andre), a demon of the sort that contemporary medical science would dispel by applying leeches. He’s an imp as inky as Felix the Cat, with a pointy tail and a silver tongue counselling self-destruction. On Bean’s opposite flank, like a perilously pure angel, is an elf named Elfo (Nat Faxon). In the first of this season’s ten episodes, this pointy-eared idealist flees his constrained life in the cloying safe space of Elfwood, a forest community of candy makers that exceeds Smurf Village in its jolly innocence.

The storybook phantasmagoria of the background art—the spires and turrets of King Zøg’s castle hover atop a bluff and a wondrous waterfall—introduces a sense of sublimity. The addition of mythic beasts, of giants and sorcerers and sirens signing sailors to their doom, encourages fleeting feelings of awe. And all of that magic is swiftly and ridiculously corrupted by mortals and their profane antics. Outside the walls of Dreamland, heads on pikes smile like lawn ornaments. A sailor submitting to sirens’ song fails to embrace any mermaids but achieves carnal joy with a number of adorably ugly walruses.

The jokes arrive with the same profuse variety and impressive deep geekery that Groening has trained a spoiled audience to expect since the début of “The Simpsons”: anachronistic puns, ye olde sight gags, poised ripostes, and throwaway lines ranging from subtle references to art history to blunt-force allusions to heavy-metal bands. Playing against the seriousness and self-glorification of so much sword-clanging fantasy, it makes the most of slapstick pestilence and the absurdist misery of peasants, revisiting history as farce.

The scenes are quick and punchy, yet the episodes, unfolding serially, are long and sometimes sluggish. It is as if “Disenchantment” is designed to emulate a daylong Dungeons & Dragons jag. Each episode is called, with mock portentousness, a “chapter.” The season is perhaps most satisfying if consumed in a binge, so that its questing convolutions feel like the motions of a languorous epic. It may be more interested in philosophy than in history: I’m tempted to understand each of Bean’s companions as representing an advance guard of Enlightenment thought. Luci, a blasphemous champion of absolute freedom, resembles an emissary of the Marquis de Sade, and Elfo, guided by an unsupportable optimism and shielded from evil primarily by dumb luck, cruises through the season’s grotesqueries like Voltaire’s Candide. Two sidekicks play like spokespeople for opposite poles of human nature, and the princess, hilarious amid armor-clad misadventures, is like the changeless soul of human folly.