Home Culture Do Walls Change How We Think? | 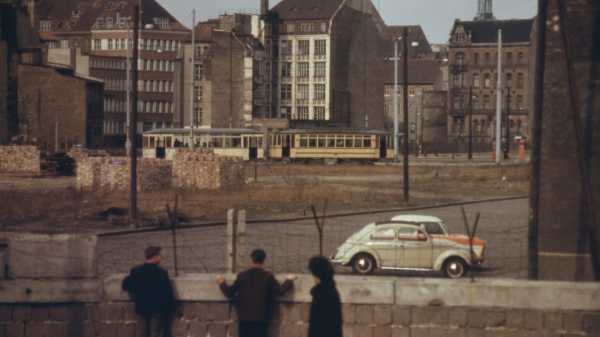 In the summer of 1962, an East German woman suffering from a locked jaw arrived at a psychiatric clinic in Leipzig. Weeks earlier, she’d had an infected wisdom tooth removed; even so, the doctor who referred her called her condition “inexplicable.” At the clinic, she was described as despondent and excitable. Within a few months, she was suicidal.

By the late nineteen-sixties, a German psychiatrist named Dietfried Müller-Hegemann had noticed a spike in such cases. A dentist waited at the shores of the Baltic Sea for a boat that would take him to China; a civil servant claimed he was being spied on; a seamstress thought that lesbians were trailing her. Müller-Hegemann noticed that these patients, and dozens of others, had something in common—they all lived close to the Berlin Wall. In his 1973 book, he gave the syndrome a name: Mauerkrankheit, or wall disease.

The fall of the Berlin Wall, in 1989, inspired hopes for a borderless world. But the construction of such barriers never stopped. If anything, border walls have proliferated. India has walled off Bangladesh with seventeen hundred miles of barbed wire; a five-layer fence stretches about six hundred miles between Saudi Arabia and Iraq. Anti-immigration barriers mark the borders of Bulgaria and Turkey, South Africa and Mozambique, Hungary and Croatia, and the United States and Mexico. All told, there are at least seventy border walls in the world today. Their construction has inspired an entire field of research dedicated to studying their effects. Psychologists, economists, geographers, and other specialists regularly publish reports in outlets such as the Journal of Borderland Studies, and much of their research suggests that border walls may be affecting the people who live near them in unforeseen ways.

A few years ago, Aideen Maguire, an epidemiologist at Queen’s University, in Belfast, began wondering whether Northern Ireland’s “peace lines”—walls and blockades built to separate Roman Catholics and Protestants during the Troubles—might play a role in the country’s abundant mental-health problems. (According to the Mental Health Foundation, a U.K. charity organization, “Northern Ireland is reported to have a 25% higher overall prevalence of mental health problems than England.”) Maguire compared the locations of the peace lines with the health records of more than a million citizens. She found that people residing near a wall were nineteen per cent more likely to be on antidepressants and thirty-nine per cent more likely to be taking anti-anxiety medication. Even those who grew up after the conflict was resolved experienced these effects. “Living in an area segregated by a ‘peaceline’ is detrimental to mental health,” she and her co-authors concluded, in their 2016 study, published in the Journal of Epidemiology and Community Health.

Correlation isn’t causation; Maguire’s data doesn’t prove that the walls cause anxiety. But her ongoing research, which examines more forms of data—psychiatric-hospital admissions, deaths by suicide—is slowly yielding the same associations. “Everything would suggest that they’re not any different from the rest of the study population,” she said, earlier this winter, “except for the fact that they have a wall at the end of their street.”

In the nineteen-sixties, Dietfried Müller-Hegemann wrote as though the physical presence of the Berlin Wall were itself the cause of wall disease. But most psychologists who study borders today see a more abstract relationship between those structures and mental health. Christine Leuenberger, a sociologist at Cornell University who has studied walls around the world, says that barriers are best thought of as part of a “wall system.” That system includes both physical markers, such as no-go areas and checkpoints, and ripple effects, such as job loss and the breakdown of social networks.

Leuenberger remembers meeting a Palestinian man in Bethlehem, near the West Bank barrier. He had been a nurse with a job in Jerusalem, but could no longer travel there for work. “I’m in prison in my own land,” she recalls him saying; he had resorted to selling soda by the roadside. Before the barrier, Israelis crossed the Green Line to buy produce in Palestinian towns, and Palestinians sewed fabric for Israeli textile companies. But an attempt to create a market at the border was stopped when the barrier went up. In this straightforward sense, walls can cut people off from sources of stability and happiness. (The lock-jawed woman in East Germany was trapped on one side of the wall while her husband lived on the other; her doctors insisted that the best therapy would be to let her join him.)

Experiences at the wall can be stressful: checkpoint interrogations, Leuenberger writes, can lead to feelings of “humiliation, demoralization, denial, anger, or aggression.” But the aggregate effects of border walls can be surprisingly subtle. Now that the Troubles are over, politicians in Northern Ireland have proposed removing the peace lines. But a 2012 survey of eight hundred and forty people who live near them found that only forty-four per cent thought they should be dismantled; more than twenty per cent agreed with the statement, “I would like things left the way they are now.” Maguire, who grew up outside Belfast, believes that the peace lines have become both a source of fear and “a security blanket” to assuage it. The continued existence of brick walls and concrete barriers dividing back yards and streets perpetuates fear of “the other”; it also reinforces the persistent segregation—a child of Catholics may not meet a Protestant until college, and vice versa—which keeps both fear and the walls alive.

Élisabeth Vallet, a geographer at the University of Québec, in Montreal, was the first researcher to attempt a systematic count of border walls around the world. During a recent trip to the southern Texas county of Hidalgo, where barriers are currently under construction, she was struck most by the numbness she encountered. “Nobody speaks about it,” she said, apart from anti-wall activists. In Brownsville, Texas, near a former Walmart where children are now detained, diners at a McDonald’s ignored the calamity next door; residents throughout the region had lost track of whether the monitoring towers above them, designed to track movements on the ground, were operative. At the same time, the sense of being watched was pervasive. Locals warned her not to speed because, they said, the area was crawling with law-enforcement officers. “The mental illness related to the wall is also related to the surveillance that goes with it,” Vallet told me. Such surveillance is part of the dystopian atmosphere that walls create.

A few years ago, Tobias Vogt, who studies public health at the University of Groningen, in the Netherlands, decided to investigate whether the fall of the Berlin Wall had extended life expectancy. Vogt compared how long East Germans would have lived if the wall had not fallen with how long they were actually living, two decades later. His study, published in Gerontology, in 2013, found that reunification had extended life expectancy among East German women by four years, and among East German men by nearly six years.

Vogt emphasizes that this dramatic difference is likely due to improved health care and higher standards of living, not to the disappearance of the wall, as such. After the wall fell, people who were sixty and over—the age group mainly responsible for the extension in life expectancy—had access to better medical care. But Vogt also thinks that freedom from oppression mattered. “A feeling of liberty, opportunities to travel, all contributed to the well-being of East Germans,” he told me. He is a living example. As a child, he loved Greek mythology, but his parents told him that, as an East German, he’d been unlikely to travel to Greece. He collected maps of the world believing that he’d never see it. When we spoke, he was in India. “For me, this is a great gift,” he said. “I am always grateful that the wall came down.” (Reunification also created economic hardship for former East Germans, of course, and Vogt is now studying whether East German children born before 1989 showed better cognitive development than those born after. The “wall system” is only one of the systems that shape our lives.)

And yet border walls may continue to cast a shadow even after they’re gone. In the years after German reunification, psychologists there realized a new syndrome had replaced wall disease: die Mauer in den Köpfen, or “the wall in the head.” Claus-Christian Carbon, a psychologist who studies perception at the University of Bamberg, asked eighty-three people to estimate distances between eleven German cities, all in different states. Six cities had been east of the Berlin Wall and five had been west of it. According to his study, published in Psychonomic Bulletin & Review, in 2005, the participants consistently overestimated the distances between cities that had once been on opposite sides of the barrier. Participants who disliked reunification performed the worst, believing that formerly East German cities were much farther away from formerly West German cities than they really were.

“Psychology is very often stronger than physics,” Carbon wrote, by e-mail. The results rhymed with something he had observed anecdotally: though the wall is gone, Berlin drivers often follow inefficient routes to avoid the area where it once stood. “Even if border walls end up falling, they stay in the minds of people,” Élisabeth Vallet told me. Demolish a wall, and its ghost remains.

In 1969, the British psychoanalyst Donald W. Winnicott called the Berlin Wall a manifestation of a “manic-depressive psychosis.” The structure, he said, allowed Germans to postpone resolution of their internal conflict. “Exactly at this spot is the place where if there is no wall there is war,” he wrote. The barriers in Northern Ireland had a similar goal: stanching the violence that had left thousands dead. Israeli psychologists, meanwhile, have told Leuenberger that the security barrier makes the Palestinians invisible. “It makes a problem that people don’t want to deal with go away,” she said. The murals that are sometimes painted on border walls end up deepening the effect of the mirage.

“Basically, their purpose is psychological protection,” Vamik Volkan, a Turkish Cypriot psychiatrist with a special focus on international relations, said, of border walls. (For a time, Volkan was the president of the International Society of Political Psychology.) The structures promise to answer the question, “Who are we now?” But, in this respect, Volkan went on, they are “a psychological illusion.” Often, they only emphasize and worsen the identity crises that they are meant to resolve.

An entrenched sense of crisis, of course, may be exactly what wall-builders hope to create. When she conducted her global count of border walls, Vallet found that they had been built for three main purposes: establishing peace; preventing smuggling and terrorism; and stopping immigration. Almost all of the fifty or so structures built since 2002 have been designed for the latter purpose: keeping “others” out. A political agenda built on nationalism is well served by suspicion and paranoia about the motivations of foreigners. Arguably, the mental-health problems that walls exacerbate also benefit nationalist leaders. Despondency can weaken our ability to resist; depression and anxiety may affect how we vote. A citizenry grown numb to the inhumane treatment of detainees is less likely to fight a leader who uses fear of “the other” as a political platform. It takes a siege mentality to build a wall. Once it’s built, those in its shadow end up feeling more besieged.

Journalists from CNN and the Des Moines Register will moderate the...