Home Culture Do We Write Differently on a Screen? | 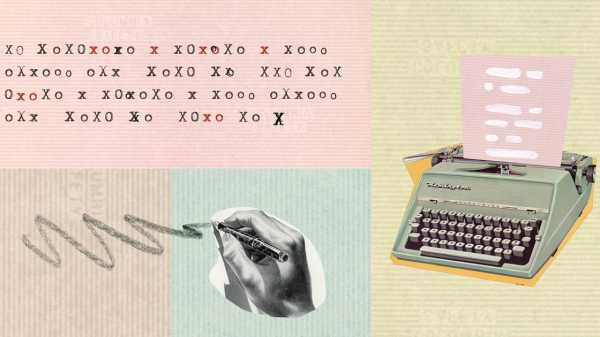 I wrote my first story in a university library, in Boston. It was 1978, and I was bored to death with structuralism and post-structuralism. I wrote with a cheap ballpoint pen in the exercise book that I used for lecture notes. I noticed at once that the time passed differently when writing a story. It wasn’t quicker or slower, simply absent. You moved into a dream space. You didn’t know whether it was early or late.

When I finished, I typed up the story on a small manual typewriter. I have to thank America for teaching me how to type fast, with all fingers and never looking at the keys. In England, you gave your weekly essay assignments to professors handwritten. In the States, they had to be typed. Walking back through the campus, late on spring evenings, you could hear a clatter of typewriters from open windows. I bought a book called “Teach Yourself Typewriting.”

When a story was typed, you let it rest, then reread it and made handwritten corrections. Then reread it again. Then again. Then typed it up again, hopefully without mistakes. A lot of paper was thrown away. A lot of Wite-Out was used. You were a craftsman, producing pieces of paper with neat black signs. After making photocopies, you sent the story, by post, to a magazine, and it came back, months later, with a rejection and perhaps some suggestions how to improve it. You rewrote and retyped and re-sent.

It was many years before I had a story published. Meantime, I moved back to the U.K., then, with my Italian wife, to Verona, where I began to translate. Here, typing skills were invaluable. You rode your moped into town in the morning, picked up a piece of work—perhaps a description of a marble-quarrying machine—rode home and had to translate it onto camera-ready paper for evening delivery and immediate printing. There was no time for rough drafts. You read each sentence, thought it through, produced an English version in your head, and typed it out perfect the first time. It was a fantastic discipline. And hugely stressful.

In the early eighties, we bought an electric typewriter that could memorize about half a page before printing it out. To read the page, you had to scroll it from right to left, on a single line of display, between keyboard and print roller. It cost the equivalent of a thousand euros in today’s money and wasn’t satisfactory. A year or two later, we spent double that for a machine that could memorize a fantastic four pages on an audiocassette and offered a yellowish monochrome screen where you could read as many as fifteen lines at once. That was the machine on which I translated Roberto Calasso’s “The Marriage of Cadmus and Harmony.” On more than one occasion, the audiocassette jammed and four pages of work were lost.

But, before that, I published my first short novel, “Tongues of Flame.” I continued to write fiction by hand and then type it up. But, at least, once it was typed, you could edit on a screen. What a difference that was! What an invitation to obsession! Hitherto, there was a limit to how many corrections you could make by hand. There was only so much space on the paper. It was discouraging—typing something out time after time, to make more and more corrections. You learned to be satisfied with what you had. Now you could go on changing things forever. I learned how important it was to keep a copy of what I had written first, so as to remember what I had meant in the beginning. Sometimes it turned out to be better than the endlessly edited version.

Despite the introduction of this technology into the writing process, feedback on what you wrote was still slow. Long-distance and international phone calls were expensive, and editors and agents tended to communicate by letter. Post from London took at least a week to arrive in Italy. When it came to reviews, English newspapers were hard to find and expensive if you did find them. You had to wait, sometimes months, for press cuttings from London. Every day, I listened for the postman, passing on his scooter, and rushed downstairs to check the mail when he passed. Nothing. Just when the price of fax machines fell to something affordable, we bought a flat in a new development on the edge of town. The phone company made us wait eighteen months for a line.

But this slowness was positive. You concentrated on the next piece of writing or the next translation. You learned not to worry too much what people were saying about you. What did it matter, so long as your publisher was more or less happy? We had personal computers at this point, but I still wrote fiction by hand. The mental space feels different when you work with paper. It is quieter. A momentum builds up, a spell between page and hand and eye. I like to use a nice pen and see the page slowly fill. But, for newspaper articles and translations, I now worked straight onto the computer. Which was more frenetic, nervy. The writing was definitely different. But more playful, too. You could move things around. You could experiment so easily. I am glad the computer wasn’t available when I started writing. I might have been overwhelmed by the possibilities. But once you know what you’re doing, the facility of the computer is wonderful.

Then e-mail arrived and changed everything. First, you would only hook the computer up through your landline phone a couple of times a day, as if there were a special moment to send and receive mail. Then came the permanent connection. Finally, the wireless, and, of course, the Internet. In the space of perhaps ten years, you passed from waiting literally months for a decision on something that you’d written, or simply for a reaction from a friend or an agent, to expecting a reaction immediately. Whereas in the past you checked your in-box once a day, now you checked every five minutes.

And now you could write an article for The Guardian or the New York Times as easily as you could write it for L’Arena di Verona. Write it and expect a response in hours. In minutes. You write the first chapter of a book and send it at once to four or five friends. Hoping they’d read it at once. It’s impossible to exaggerate how exciting this was, at first, and how harmful to the spirit. You, everybody, are suddenly incredibly needy of immediate feedback. A few more years and you were publishing regularly online for The New York Review of Books. And, hours after publication, you could know how many people were reading the piece. Is it a success? Shall I follow up with something similar?

The mind becomes locked into an obsessive, manic back-and-forth. When immediate confirmation is not forthcoming, there is a sense of failure. Suddenly, the writer, very close to his public, is tempted to work hard and fast to please immediately, superficially, in order to have immediate gratification for himself in return. Curiously, the apparent freedom of e-mail and the Internet makes us more and more conformist as we talk to each other unceasingly.

While you sit at your computer now, the world seethes behind the letters as they appear on the screen. You can toggle to a football match, a parliamentary debate, a tsunami. A beep tells you that an e-mail has arrived. WhatsApp flashes on the screen. Interruption is constant but also desired. Or at least you’re conflicted about it. You realize that the people reading what you have written will also be interrupted. They are also sitting at screens, with smartphones in their pockets. They won’t be able to deal with long sentences, extended metaphors. They won’t be drawn into the enchantment of the text. So should you change the way you write accordingly? Have you already changed, unwittingly?

Or should you step back? Time to leave your computer and phone in one room, perhaps, and go and work silently on paper in another. To turn off the Wi-Fi for eight hours. Just as you once learned not to drink everything in the hotel minibar, not to eat too much at free buffets, now you have to cut down on communication. You have learned how compulsive you are, how fragile your identity, how important it is to cultivate a little distance. And your only hope is that others have learned the same lesson. Otherwise, your profession, as least as you thought of it, is finished.

What’s wrong with the Mercedes?

Parent as a Verb: The Hormones, They Are A-Changin’ |