Home Culture Does Anyone Remember the Spirit of ‘76? 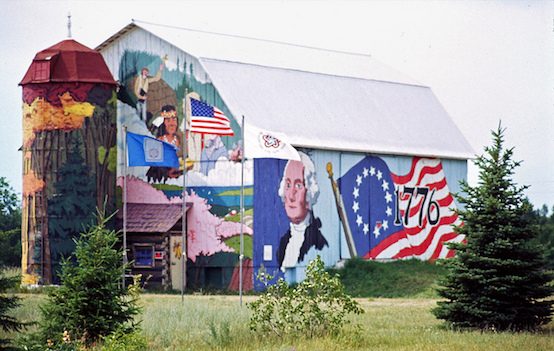 As spring turned into summer, 1976, I was age 9, living in what I then presumed the norm for America, the rather idyllic and medium-sized Kansas town, Hutchinson (affectionately known in Kansas as “Hutch”).

My neighbors were loving, caring, and intelligent. My parish—one of three in town—was led by a devout priest who had immigrated from Ireland in 1950. When I later became an altar boy, he even knighted me. I loved my school, but especially my teacher, Miss Mackey. I had wonderful friends who helped me explore the surrounding wheat fields and nooks and crannies of a prosperous area, filled not only with the raising of agricultural products of all types, but also the harvesting of the abundant local natural commodities of oil and salt. Indeed, my home town boasted the world’s second longest grain elevator (the Soviets built a slightly bigger one just to spite us), and we sat atop the (then) world’s second largest salt deposits. Our high school mascot was even, appropriately and creatively, the mythical “Salt Hawk.”

When it came to entrepreneurship, we were quite excellent as well. The headquarters of Farmarco/Farmland resided in Hutch, and, even more impressively, the truly upscale and innovative grocery chain of Dillons and Kwikshop (now owned, for better or worse by Kroger; not so upscale) began and was headquartered in Hutch. The president and vice president at the time were even Ph.D students who had worked with Milton Friedman. The town also hosted the state fair, an excellent public library (my second crush—after Miss Mackey—was Miss Canfield, the reference librarian), some of the finest city parks in America, and a planetarium that would soon grow into the world famous “Cosmosphere.” We even had, at one point, three different book shops in town, and my mom—ever gracious—encouraged me to read from as far back as I can remember. Yet, she was also “hands-off,” and, in typical 1970s fashion, she free-range parented me. Who wanted to watch TV when I could bike throughout the town and countryside, exploring, observing, discovering, and uncovering? Saturdays were always the same, as were summer days. Up by 7, getting my own breakfast, and off to find friends and friends. The only rule—I had to be home by dinner time.

Yet, even at age 9, I knew that not all was right with the world, especially for those not privileged to live in Hutchinson. Several images haunted me at the time: our betrayal of the South Vietnamese (I can still see in my mind’s eye the Vietnamese women throwing their babies into the departing American helicopters) and the Cambodians; the fear of a Soviet strike on American soil; and the devastating demoralization that accompanied Watergate. I even vaguely understood that inflation and the energy crisis were harming America at home and abroad. Believe it or not, one of my first political letters ever written (yes, I was nine) was a letter of complaint and concern to President Gerald Ford, who graciously responded with a form letter. And, just to make sure that those of you reading this don’t think me too high brow, I also wrote letters to Bill Gaines of Mad magazine, who responded far more graciously than had President Ford, sending me not only a personal letter, but photographic images of Alfred E. Newman and some rare and unusual publications from his company.

I must—if not clear from my narrative so far—point out something that many Americans don’t know or, even if they do, don’t understand. Kansans are as proud to be Kansans as Texans are to be Texans. Kansans, in typical humble fashion, just aren’t quite as loud about their pride as are Texans. To Kansans, Kansas is not “flyover country.” Rather, it is a place where generations upon generations of immigrants have broken the soil and made it the breadbasket of the world. Kansans not only wave to every other driver on the backgrounds of the state, they plant and mark historical spots about every two or three miles. To Kansans, Kansas is a place where everybody helps everybody else, and class distinctions make little to no difference. A Kansan is a Kansan is a Kansan. Though I had no idea how unusual this was as a child, Hutchinson even boasted a very sizable Mexican community and a somewhat sizable black population. No doubt, on average, the whites of Hutchinson lived in the central and northern (that is, nicer) parts of town, but the various peoples got along rather well, especially given the kind of conflict that one found in other places in the 1970s. And, as with so many good communities in the 1970s, we graciously welcomed those who had made it out of South Vietnam.

Before getting to the actual heart of this piece, I must note one other thing about Kansas. Kansans are deeply conservative, broadly defined. I have a close high school friend who once began a joke by stating, “You know how Kansans are divided into two types of folks: conservative and really, really conservative.” She nailed it, perfectly. My mother—already praised above—still regretted the loss of Barry Goldwater’s presidential run in 1964. She was (and remains) pretty diehard about this. I can still see our family room with perfect clarity. On the bookshelves just to the left of the hearth and fireplace sat Goldwater’s books, the Encyclopedia Britannica Great Books (all of them), The Fountainhead, Dr. Zhivago, and the family bible. The mix pretty much represented everything we believed.

Kansans are so conservative, they even call boxelder bugs “democrats.” No joke! I had no idea that the bug had any other name than “democrat” until my first year in graduate school. I was on a walk with my beloved advisor, Anne Butler (RIP), and a boxelder bug jumped on one or the other of us, and I exclaimed in pure innocence, “Oh, sheesh, I hate democrats.” Anne, being rather left wing, just laughed and laughed, especially as I explained to her that—and I was certain—that was the proper name for the bug. I now know better. And, while I did know a few actual Democrats when growing up, they mostly lived in Wichita and Kansas City, not in respectable towns like Hutchinson. The division in Hutch was not Republican and Democrat, but Republican and Libertarian.

As skeptical as my family was about the war in Vietnam and Richard Nixon (even before the Watergate scandal), we knew the communists to be almost pure evil. My mom still remembered her own childhood of processing with the priests, the nuns, the Blessed Sacrament, and her neighbors around Hays, Kansas, praying for the end of communism, the greatest force of evil in the world.

When I wasn’t off with my friends, looking for adventure in the environs in and around Hutchinson, I would spend hours upon hours setting up my plastic army men, always having the U.S. take out the Vietcong. After the hours of patient placement and encampment, I happily blew up my VC with firecrackers in a mere matter of minutes.

All of this brings me to July 4, 1976. Kansans, by and large, were more than disgusted with Washington, D.C., New York (especially the UN), and California (Hollywood) that year. There was a feeling—not inaccurately—that our leadership had not only failed us and the world, but had failed so miserably that it might take generations to get back to a true understanding of the original intent of the founding. There was no doubt—though it was more in humility than smugness—that Kansans thought the world should look much more like Kansas. To be frank, there’s an entire history of the patriotic summer of 1976 that has yet to be written. It was, at least to those of us who lived it, an awakening to the good, the true, and the beautiful of American constitutionalism and republicanism. It was real, it was deep, and it was organic.

Three events stick out—clear in my memory—even after 42 years. First, many of my neighbors began framing and hanging in their homes copies of the Declaration of Independence. Even as a nine-year-old, I remember the discussions in the neighborhood, at a friend’s house, and even in church about the meaning of that august document. It was treated—by all—with a deep awe and reverence, a text long forgotten but eternally true.

Second, and whether other cities in America did this or just Hutch, I don’t know. A group in town—with the permission of the fire department and the city government—not only allowed but actually encouraged every child in the town to claim a fire hydrant and paint it as one of the founding fathers or mothers. While this might sound hokey to the modern reader, it was a powerful symbol of patriotism throughout the entire community. Every single fire hydrant—at least as I remember it—was a celebration of the founders.

My older brother, Todd, and I claimed at the end of our neighboring street, Bannock Burn. At the time, it was a dead end, but it’s now become a link to a recent housing development. Regardless, at the end of that street, rather proudly, stood our version of John Hancock, wearing the powdered wig of the time and a yellow frock coat.

Third, one of the men in town I respected most—and I still miss dearly—was a great intellect, patriot, and gentleman, Bob Gottschalk (RIP), the manager of the Kansas State Fair. On the evening of July 4, thousands upon thousands of Kansans descended upon the fairgrounds. The local rock radio station, KWHK 1260-AM, provided the soundtrack over loudspeakers. My family and I arrived early, laying out our beach towels and claiming a prime spot before twilight hit. The show, once it began, lasted for an hour or two, and I still remember rather clearly hearing Kansas’s (yes, the rock band) “Song for America” (I’m not sure we realized how critical of America it actually was) and Styx’s “Suite Madame Blue” being played. Gottschalk and the radio station lit the fireworks, timed rather perfectly to the music.

It was a night I will never forget, and the day itself will always be deeply ingrained in my soul.

Something profound happened that summer in the middle of a little appreciated state. The citizens of Hutchinson, Kansas, tired and sick and angry, took the celebration into their own hands. It was no mere social barbecue that year. Rather, with a fierce determination to express ourselves, July 4, 1976, was a meaningful and abiding display of love for what the founding fathers had given us.

Truly, we understood and lived out the “Spirit of ’76.”

Arsenal in talks with Aaron Ramsey over contract extension