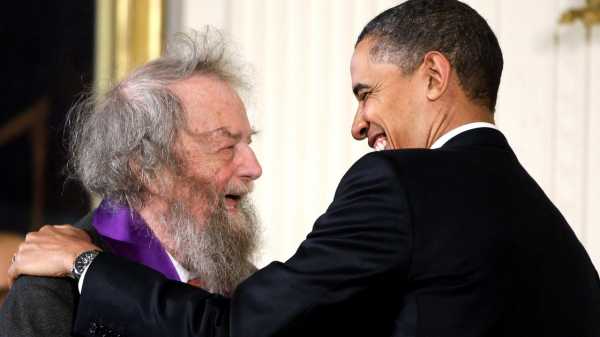 In 2011, the poet Donald Hall—who passed away at his home in rural New Hampshire, on Saturday, at age eighty-nine—received the National Medal of Arts from President Obama, the highest award granted to an artist by the American government. For several years, I have kept the above photo of the ceremony, which takes place in the East Room of the White House, saved to my phone. Looking at it makes me instantly glad: Hall appears pleasingly nuts, with scraggly wisps of gray hair sticking out every which way. Obama has such a wide and earnest grin. They are both laughing, as if to say, “What a wild and beautiful thing!”

Hall, who was the first poetry editor of The Paris Review, beginning in 1953, and the Poet Laureate of the United States, from 2006 to 2007, published more than fifty books in his lifetime, across several genres. He had fixations: baseball, loss, devotion, New England. He spent much of his later life at Eagle Pond Farm in Wilmot, New Hampshire, in a white clapboard house with green shutters—the same house where his grandmother was born, in 1878, and his mother, in 1903. “Only in the rural south, and in rural New England, do American houses willfully contain the history of a family,” he wrote in the introduction to “Eagle Pond,” a tender and elegiac book.

Much like the poet and essayist Wendell Berry, Hall had deeply held beliefs about how our attachments to our native places were being systematically cleaved, at great spiritual and practical cost. Hall, too, could be a little crabby. I always loved this about him—the earned misanthropy of a person who has witnessed too many absurdities, and endured the relentless commodification of what was once pure. He was especially agitated by the existence of Vermont. (I understood this to be a delightful interstate spat, in the grand tradition of New York vs. New Jersey, or any other number of semi-inscrutable regional feuds.) In an essay titled “Reasons for Hating Vermont,” he cites the state’s urban pilgrims—born-rich city-dwellers who voyage north on long weekends to get their hands dirty, but not really—as loathsome, a plague on the landscape. “In Vermont when inchling trout are released into streams, a state law requires that they be preboned and stuffed with wild rice delicately flavored with garlic and thyme,” he writes. Touché, Hall!

Hall’s essays are often polemical, and frequently very funny. His book “Life Work,” from 1993, is a meditation on the nature and practice of work (“I’ve never worked a day in my life,” it opens) and the strange rituals that humans devise to navigate our days (he subscribes to Baudelaire’s notion that work is actually less boring than having to amuse yourself). The goal of work—the bliss of writing, for Hall—is in the way it collapses time. “In the best part of the best day, absorbedness occupies me from footsole to skulltop. Hours or minutes or days—who cares?—lapse without signifying.” He couldn’t much abide reading “junk prose,” or watching television or movies, but he was mesmerized and thrilled by sports, and especially the Red Sox: “I sit with my mouth open, witlessly enraptured.”

Hall was born in Connecticut, in 1928, and moved to New Hampshire in 1975, with his second wife, the poet Jane Kenyon. She died at Eagle Pond, in 1995, from leukemia. They met at the University of Michigan (she was a student there, and he was a professor, nineteen years her senior) and married shortly thereafter. Following her death, Hall wrote deeply and endlessly about his grief, the way it erased everything. “The year endures without punctuation,” he writes in “Without,” a poem from 1995, “the body is a nation tribe dug into stone / assaulted white blood broken to fragments.” Years ago, I pressed a bit of a New Hampshire fern—the green frond of an Interrupted Fern, to be more precise—into my copy of “Without.” Each time I open it, and the fern falls out, and I inevitably think of Kenyon’s poem “Let Evening Come,” in which she suggests that we should submit to endings with grace and assurance:

Let it come, as it will, and don’t
be afraid. God does not leave us
comfortless, so let evening come

It’s good advice, if difficult to metabolize, and harder still to follow. I have certainly bucked, wildly and without dignity, against loss. How to quiet the panic that arises when you believe you’ve been involuntarily divested of love? Yet Hall and Kenyon both seemed to know something about the solace on the other side of grief, and how to get there. In 2016, Hall wrote an essay for this Web site, titled “Between Solitude and Loneliness.” It’s one of the best things I’ve ever read about mourning, and of making a difficult kind of peace with mortality, and of being alone. I am comforted to believe that Hall went easily into the good night. He and Kenyon are buried together now, near Eagle Pond. I think of the final stanza of his poem, “The Painted Bed,” and feel calm:

to repose without pain
in the palace of darkness,
my body beside your body.