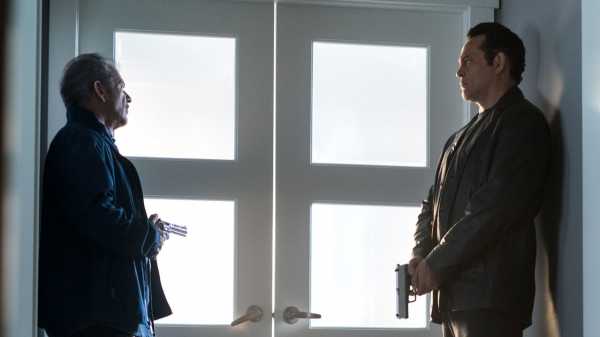 White-male rage finds its cinematic form in S. Craig Zahler’s crime drama “Dragged Across Concrete,” which opens Friday in theatres and on streaming platforms. It’s an extraordinarily effective act of artistic trolling, a self-consciously brazen provocation that also covers its tracks with winkingly transparent gestures. It’s also impressively stylish, and its style coheres remarkably well with its substance—perhaps even more than Zahler intended. His distinctive sensibility, as both writer and director, is the source of most of the pleasure of a movie that’s calculatedly harsh, cruel, and ugly, both in its drama and in its dogma.

“Dragged Across Concrete” is the story of two police officers, in the fictitious city of Bulwark—Brett Ridgeman (Mel Gibson) and his much younger partner, Tony Lurasetti (Vince Vaughn)—who are suspended from the department without pay for using excessive force while arresting a drug dealer. In need of quick money, Ridgeman (which is what everyone calls him) concocts a scheme in which he and Tony will rob another drug dealer. But, when they follow the ostensible miscreant, they instead stumble upon a deadly bank robbery and, to assuage their sense of guilt and live up to their sense of responsibility, pursue the sadistic criminals to their hideout. Meanwhile, another character, a young man named Henry Johns (Tory Kittles) is newly released from prison. Also in need of money, he lets a young neighborhood crime boss named Biscuit (Michael Jai White), who’s also his childhood friend, persude him to serve as a driver and lookout for the criminals. At the hideout, Henry gets caught between the criminals and the two cops.

Yet this schematic overview barely hints at the elaborately detailed story that Zahler constructs in the movie’s two-hour-and-forty-minute running time; it also barely hints at the ideological grid on which the action is strictly plotted. Ridgeman and Tony aren’t just excessively rough; they’re openly racist. The suspect whom they abuse (Noel G.) is Hispanic, as is the suspect’s girlfriend (Liannet Borrego), whom they also abuse and subject to racist taunts. When Ridgeman and Tony are hauled before the head of their unit, Lieutenant Calvert (Don Johnson), he unleashes a rant against political correctness and civilian critiques of police behavior, and the duo respond bitterly and sarcastically in kind. Ridgeman’s wife, Melanie (Laurie Holden), an ex-cop, has multiple sclerosis and can no longer work, and Ridgeman regrets that the family has to live in a “shitty neighborhood” because of his “shit pay.” Melanie says that she’s “as liberal as an ex-cop can be,” adding, “I never thought I was a racist before we moved to this neighborhood.” Their teen-age daughter, Sara (Jordyn Ashley Olson), gets harassed in the street by a quintet of black male teen-agers. Meanwhile, Henry, the recently released convict, is a young black man whose mother (Vanessa Bell Calloway) is having sex for money in order to support her heroin habit, while Henry’s young brother, Ethan (Myles Truitt), who uses a wheelchair, stays locked in his bedroom.

Yet Zahler hedges the movie’s racial stereotypes and sympathetic depictions of racism with details of plausible deniability that suggest Zahler’s awareness of how the movie is likely to be perceived. Tony’s girlfriend, Denise (Tattiawna Jones), is a black woman, a successful white-collar professional. When Ridgeman and Tony are suspended, Ridgeman and Lieutenant Calvert—his former partner—have a frank tête-à-tête, in which Calvert affirms that Ridgeman did, in fact, use excessive force this time around and that he is “lacking perspective and compassion.” The lieutenant reminds him that this is why Calvert himself has been promoted and Ridgeman is still on the streets—and at lower pay. Despite having no special training beyond his keen insights and street smarts, Henry (avoiding spoilers) is shown to be as brave and clear-headed under fire as Ridgeman and Tony are. (Nonetheless, despite playing a major role in the film, Henry remains a cipher, reduced to his function in the plot.).

Along with the ethnic stereotypes that fill the movie is a skein of gender stereotypes to match. Zahler’s world is a man’s world, in which men have the active roles and women take the passive ones—in which women are enfeebled and endangered, and men must either defend them or be implicitly complicit in their abuse by other, evil men. Ridgeman and Tony express their sexism and their homophobia as flagrantly as their racism. At a hefty breakfast after the abusive arrest, they declare that one can no longer tell men from women. (“Gay” is also their casual epithet.) There’s no female officer on view in the line of fire, no gender-nonconforming character of any sort who might shift the duo’s perspectives or suggest a view broader than their own.

While he’s at it, Zahler presents a similarly jaundiced view of immigrants, or, rather, of non-Anglos: he offers two heavily accented European characters, played by Udo Kier and Thomas Kretschmann, and both are refined monsters, to match the movie’s two street-level Latinx miscreants and one Asian sex worker. And lest any viewer miss the point, an Asian convenience-store clerk is watching a television news report about the “racist cops” when a criminal bursts into his store and wreaks mayhem: members of minority groups can complain all they like about racist abuses in American society, the movie suggests, but it’s only the steadfast defense of civil society, even by the ostensible abusers, that protects these same people from the real threat that they face—of violent criminals, including ones who are themselves minorities.

“Dragged Across Concrete” hits the trifecta of racism, sexism, and nativism. If stereotypes, rants, and hate-filled implications were all there is to the movie, it could easily go out with the rest of the cinematic trash. But there’s much more to it, both in content and in style, which is what makes it formidable, memorable, and all the more insidious. The movie advances at a deliberate pace that gives room to each of the sharply defined and carefully observed elements from which Zahler builds it—both in physical action and in speech. The scenes of surveillance and pursuit, of crime and violence, have an idiosyncratic sense of nuance that’s matched by the pugnaciously expressive dialogue. Zahler is something of a watchmaker of criminality and policing. He conspicuously delights in the crafting of each detail and its integration into a minutely calibrated mechanism, and he lavishes as much attention on the precise, macabre taunts of sadistic killers and the peculiar elements of their attire as he does on the paeans to honor and principle—and to diner food—that Ridgeman and Tony unspool.

What’s more, this tightly machined dramatic style is matched by the phlegmatic, emphatic performances (not just by Gibson and Vaughn but by the cast over all) and reinforced by Zahler’s distinctive, tightly restrained style of visual composition and editing. He films mainly in static, fixed-focus shots, in which two characters are together, talking deliberately, weighing their words with the gravity of the life-and-death situations that they’re confronting. In these settings, no less than in scenes of grim martial confrontation, characters face off as if in a play, cut off from all external circumstances and seemingly locked together in a mortal showdown. Zahler is thrilled by these primal tests of will and skill—of masculine force—in which all that matters is the immediate outcome. The tone of “Dragged Across Concrete” suggests a faux-Hemingwayesque minimalism without Hemingway’s dandyishness, ambiguity, irony, or sense of vast implication; his movie is all tip and no iceberg.

Zahler’s vision is an entropic one, of looming chaos that only the constant exertion of force—as by the good guys, such as Ridgeman and Tony—keeps from surging gorily and horrifically to the fore. For that matter, Zahler’s taut, restrained style is a part of that exertion of force—it’s an artistic force that, with its centripetal pressure, prevents the centrifugal force of emotionalism, sentimentality, Pollyanna-ish liberalism from prevailing. In effect, Zahler offers his art, his style of confrontational Realpolitik, as a sort of public good, not merely a call to civic virtue but a contribution to it. The movie’s style is as reactionary as its explicit doctrine: it reflects its protagonist’s embittered sense of entitlement. The suspended Ridgman, decrying what he considers the injustices he has endured, justifies his criminal scheme by telling Tony, “We have the skills and the right to acquire proper compensation.” That very sense of skills unrewarded, of craft unrecognized, of public service taken for granted, seems to be the engine behind Zahler’s aesthetic, the cinematic counterpart to his political outlook. The movie’s conspicuous pride in craft lacks the largeness of imagination that belongs to worthwhile art; it’s exactly the sort of movie that makes the very notion of craft seem hardly admirable. There’s no shortage of significant works of art in which characters voice repellent ideas and do repellent things that, however, are distinguished artistically from the artist’s own point of view. This isn’t one of them.

Without a backward glance: Éamonn Fitzmaurice on Kerry and beyond